Our archaeological collection reveal new stories and meanings that contribute to our understanding of Aboriginal people, colonialism, impacts on our landscape and the continuing growth and development of Parramatta. Since 1990, the Heritage Centre has been the most significant local repository for objects identified in our local government area.

Due to the possible significance of archaeological resources in the Parramatta region, it is appropriate that any enquiries regarding archaeological material found on private land should be forwarded to the New South Wales Heritage Office.  They will be able to advise you on the best course of action. Email: heritage@heritage.nsw.gov.au

Below is the relevant excerpt from the Heritage Act 1977:

Section 146:  Notification of discovery of a relic

A person who is aware or believes that he or she has discovered a relic (in any circumstances, and whether or not the person has been issued with a permit) must:

Queens Wharf Area – This dig site is located on the foreshore of Parramatta River from Arthur Street to Charles Street Wharf, plus a strip of land on the south side of George Street between Harris and Purchase Streets, and the foreshore on the north side of the river from Gasworks Bridge to Morton Street.  This site included the Howell’s Wind and Water Mill and Byrnes’ Cloth Factory sites.  The site was excavated in 1992 and the report published in 1996.  The sites are significant on a number of levels, including the role Parramatta played in the survival of the colony especially from 1788 to the Macquarie period; and the early development of industries such as milling and cloth manufacture.

Barrack Lane – this dig site focused on the sub-floor and yards of a group of mid 1800s workers’ cottages in Barrack Lane, Parramatta.  The report was published in 1991.   The site was undeveloped when the land was subdivided and sold in 1833.  The cottages were constructed in 1842-1844 and were always used as housing.  A well on the site was filled with domestic artefacts, such as bottles, ceramics and pipes.  These were donated to Sydney Living Museums.

1-3 George Street (Family Court) – this site was excavated in 1985 and the report published in 1986.   The history of the site indicates both Aboriginal and Colonial presence and it is the site of one of the earliest convict built huts, erected in Parramatta, 1790.  Objects found on the site include small Aboriginal stone artefacts, as well as earthenware, Chinese porcelain, clay pipes, sandstone bricks, and clay tiles.

Westfield Car Park – the site was excavated in 1992.  It is believed that this area could have been built on as early as 1810 and evidence suggests that a Tannery operated from the site as well as some early houses.  The site revealed a range of information and material dating from early settlement including a Kings School Cadet Button, 1799 Britannia coin, a bone toothbrush and many others.

Corner of Charles and George Streets (also known as 180-180A George St, Meriton Apartments). This site was excavated in 2002.  One of the lots on the site is significant for its association with William Byrnes, another with Revered Walter Lawry who was responsible for funding and building the first Wesleyan Methodist Church in Australia on Macquarie Street.  Other lots were related with Chinese market gardeners and part of this site was associated with Parramatta’s Chinatown which diminished in popularity after World War 1.  This site contains the most substantial collection of artefacts so far excavated in Parramatta associated with Chinese people.  Some of the artefacts are displayed in the foyer of the Meriton Apartment building on the northeast corner of George and Charles Streets.

Smith Street –the site is significant for its association with William D’Arcy Wentworth and his descendants.  It was an area of continuous occupation during the 19th and 20th centuries.  Objects found on the site include a cistern, Asian artefacts, jars and bottles including those significant to Parramatta such as local chemists and aerated water manufacturers Summons and Graham, among others.

Parramatta Hospital – near the corner of Marsden and Phillip Streets.  Excavated in 1993, this site is the location of the longest continually used hospital in Australia.  Between 1818 and 1848, this was the Colonial Hospital and was a typical hospital of the period sharing important stylistic characteristics with the Rum Hospital and Watt’s Military Hospital on Observatory Hill.  It was also the site of an early convict hut.  There was also evidence of Aboriginal occupation along the river.

Babes in the Wood – corner of Smith and George Streets.  This site was excavated in 1989 and the assessment published in 1990.  It was the location of the first Parramatta Inn.  This was a timber hut built by convicts in the 1790s and known as The Hawkesbury Settler.  A later publican named it Babes in the Wood.  The site reveals a range of information and material dating from early settlement including a clay pipe, horseshoe, hair comb, and a publican’s gill measure from the early 1800s, among others

Want to learn more – if you want further assistance or wish to ask a question – contact us here using our research enquiry form. 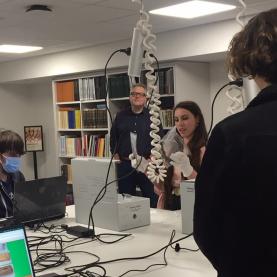