A Chronological History of the Parramatta Female Orphan School 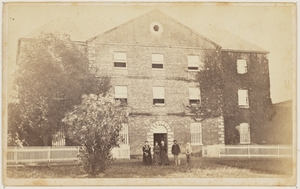 1810 – 150 acres set aside for an Orphan School at Arthur’s Hill encompassing the former Arndell estate.

1813 – Tenders for timber and bricks were called.

1820 – Plan of improvements corrected and approved; Francis Greenway to advertise for contracts to construct Matron’s room and school room.

1822 – Very little work done on buildings, Watkin to be sued and Mr Smith to estimate cost of completion. Greenway’s services to be dispensed with, and painting and glazing tenders requested.

1823 – Smith presents bill for his completed work. Buildings to be “whitewashed”.

1826 – Payments were made for 2180 ft. of chiselled flagging, the veranda in the rear of the main building, brickwork in the servants’ rooms, stables and corn house, window sills and carpenters’ work.

1828 – The “new building” intended to house male and female orphan schools, although the co-educational scheme was not proceeded with.

1830 – Repairs to boat house and a tender for a wharf called for. Extensions to the east and west wings were made.

1833 – Building referred to as “hansom and commodious”.

1865 – Drill Master’s residence likely to have been built.

1888 – Buildings handed over to department of Lunacy, and become the Parramatta Hospital for the Insane.

1905 – Additions to Central block – back stairs added, connecting passageways to both wings.

1954 – Additional level to back stairs block on centre wing to allow for hot water system boiler in shed at its base added.

1975 – The School was listed by the National Trust

Parramatta Correctional Centre its past development and future care. Kerr, J. DPCS, Sydney, 1995
Out of Sight, out of Mind – Australia’s places of confinement, 1788-1988, Kerr, J. S.H. Ervin Gallery,Sydney, 1988
With Just but relentless discipline – a social history of Corrective Services in New South Wales, Ramsland, J. Kangaroo, Kenthurst, 1996
A Merciless Place – the story of Britain’s convict disaster in Africa and how it led to the settlement of Australia. Christopher, E. Allen & Unwin 2010
Parramatta A Past Revealed. Terry Kass et al, Parramatta City Council, 1996