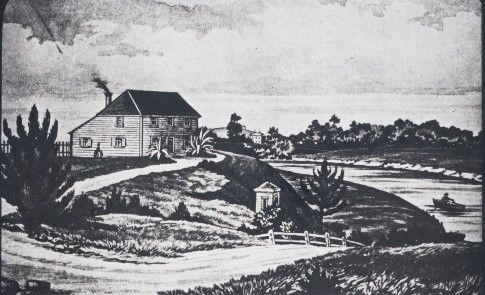 The Rangihou Reserve in Parramatta was central to Maori activity in Australia in the early 1800s. This was mainly due to the support and encouragement of Samuel Marsden who set up a school and farm to be used by his Maori visitors. The site he chose was in the area surrounding the Rangihou Reserve, originally the territory of the Burramattagal clan of the Darug people. 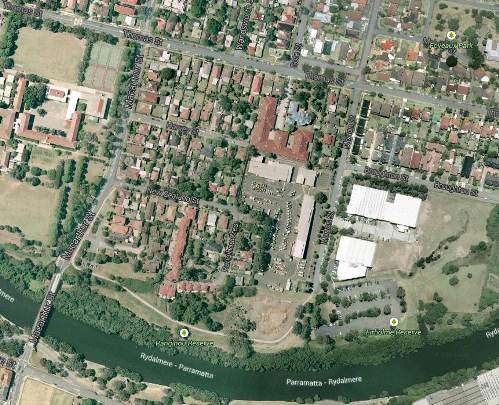 In the 1790s this area was central to a number of grants which were eventually purchased by the Rev. Samuel Marsden. The original grants were made to the following: Thomas. Haddock, 25 acres, July 22, 1795; William Reid, 60 acres, March 30, 1791; Captain Townson, 4 acres, September 15, 1796; and John Piper, 6 acres. May 1, 1797.[ii] The last of these, Piper’s grant, was land originally appropriated for use by the commanding officer of Parramatta troops and was furthest of the three from the present Macarthur street. M. Reid’s grant was adjacent an lay in the vicinity of the present Broughton House. West of Piper’s grant was Townsend’s and next to this Haddock’s.[iii]

The Reverend Samuel Marsden evidently purchased all of these grants and a consolidated grant covering 112 acres was issued to him on 1 November, 1822.[iv] Hassall’s book “In Old Australia,” refers to Marsden’s interest in New Zealand Maori culture and in it he says Marsden … bought some land close to Parramatta on the south side of the river, which he called “Newlands,” built a two story weatherboard house upon it, and laid out land for cultivation; so that they might be instructed in farming 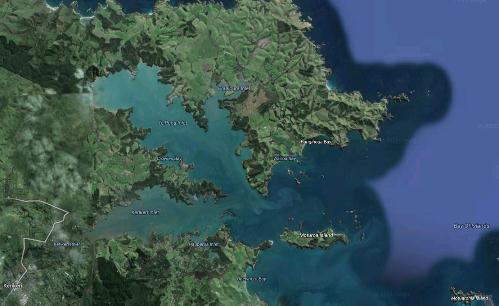 Newland’s house was at this time probably the same property that was also known as Rangihou, Rangihu, Rangihoo or Rangutoo. This house was set up as a school to be used by Maoris he invited over from New Zealand.[v] Marsden appears to have named Rangihou after Rangihoua Bay, in the Bay of Islands, near to where he preached the first Christian sermon in New Zealand in 1814.[vi] Rangihoua Bay was also the birthplace of the Ngapuhi chief Ruatara, with whom Marsden was friendly.

According to a biography written in 1858, Marsden met Ruatara on board ship while returning from England. Marsden was told that Ruatara had boarded a South Sea whaler the Argo in 1805 and then travelled to Port Jackson where he was … left on shore without a friend and without the slightest remuneration. He then shipped himself on board the whaler Albion, where he was treated kindly by Captain Richardson, and after six months cruising on the fisheries, he returned to the Bay of Islands. This was not the end of his journeying however for he next shipped with the Santa Anna to hunt seal-skins on Norfolk Island where he and fourteen other sailors were left with a very scanty supply of water, bread, and salt provisions. The ship returned late and found the sealing party were in great distress. Three of his companions, two Europeans and one Tahitian, died before the ship had returned. He then sailed with the Santa Anna to London, arriving there in 1809. He found London trying before eventually managing to arrange passage on the ­Ann, a convict ship travelling to Australia, and it was here that he met Rev. Marsden.[vii]

Marsden’s meeting with Ruatara and the arrival of some South Sea Missionaries from Tahiti seems to have inspired Marsden to set up a mission in New Zealand. And his friendship and fact that whalers had already travelled there appears to be the main reasons Rangihoua Bay was selected as the first Christian mission in New Zealand. It was closed sometime around 1829.[viii]

However initially the missionaries seem to have been well received by the Maoris and when returning to Sydney, Marsden invited Maori Chiefs Ruatara, Hongi Hika, Korokoro and their families to come and live with him in Parramatta. The practical background to this invitation was to stimulate trade practices and relationships, as well as safe passage and protection for Europeans travelling to New Zealand.  Hongi Hika visited in 1814 with Reverend Kendell and returned to New Zealand with Marsden, and TirangiTe Rangi a brother of Korokoro also visited in the same year although it is not recorded if he returned with Marsden. In 1818 Te Koki, chief of Kawakawa and Paihia sent his son Te Ahara to stay with Marsden at Parramatta where he died. According to Henry Williams Te Koki asked for a missionary in exchange for his son’s death. In 1823 Reverend Kendall records that a Ngapuhi chief Uriohau also visited Marsden in Parramatta.

Marsden clearly had a high opinion of the Maori and in a letter to his friend John Terry he wrote … They are a noble race, vastly superior in understanding to anything you can imagine…[ix] One of the most famous of Marsden’s Maori visitors was the chief Hongi Hika whose … knowledge of European trade, commerce, shrewd business sense and ability to negotiate for principal articles from the missionaries such as; muskets, axes, spades and hoes[x] made him a key player in New Zealand politics. In 1827  Reverend Henry Williams explained Marsden’s thoughts on setting up a settlement in Sydney. … On the return of Mr. Marsden, the question of the education of the children was again brought forward, and in a short time concluded; when it was determined, that the children should be educated in N.Z. Mr. Marsden entered with much apparent interest, upon the idea of a New Zealand settlement in Port Jackson; that is to say, within the Colony. Our ideas corresponded generally, yet differed widely as to distance. He thinks that it should be situated between Sydney and Parramatta; we that it should not be within one hundred miles of Sydney; that the natives should not be subject to visits from the curious intruders, nor have it in their power to retreat upon very slight pretence: but it was left open for further discussion, both here and in Port Jackson.

However by 1827 Mr John Raine appears to have taken over the lease of the house at Rangihou and its adjacent lands as well as changing the house’s name to ‘West Grove’.[xi] The ‘Australian’ of August 27, 1830, announced the sale by auction of “West Grove” leasehold estate which had been divided into ten separate allotments, varying from half an acre to six acres. Nearly the whole of the allotment was said to be a rich garden in a high state of cultivation.[xii]

Lot 8 consisted of five acres which commanded 300 feet of river frontage, a substantial wharf at the eastern end and … the comfortable and genteel dwelling house usually designated West Grove Cottage. This was probably the house also known as Rangihou. At this time the cottage comprised of two parlours, two bedrooms, an office and storeroom, and was situated on the top of a beautiful sloping hill. Adjacent to the cottage was a clothes-yard, stock-yard, and the poultry-yard used by Governor Brisbane as a pheasantry.[xiii]

It is not clear if this sale was a success for nine years later, after Rev Marsden’s death, 100 acres of his land around Parramatta was put up for sale. It was divided into 52 separate lots and included both Newland’s House (often referred to as Broughton House[xiv]) and ‘Rangihu’ Cottage. The description for Lot 43 is as follows … includes Rangihu Cottage, garden etc. This is an extremely choice and valuable lot, a neat residence being already on it, having a back entrance to New Zealand Street and a full frontage to the River; it contains about three acres.[xv]

Newland’s House, said to have been built as a residence for Mrs. Marsden about 1835, and at the sale mentioned above, passed into the hands of Mr. Henry Harvey. He sold it just two years later in 1841.[xvi] Mrs. Perrier announced in the ‘Herald’ of 20 December 20, 1841, that she had … taken that spacious and beautifully situated premises known as Newland’s to use as a school. The name Newland’s is said to have been transferred to the property known now as ‘Broughton House’, when the original ‘Newlands’ was bought by Mr. Neil Stewart. ‘Broughton House’ was erected apparently about 1839 or 1840.[xvii]