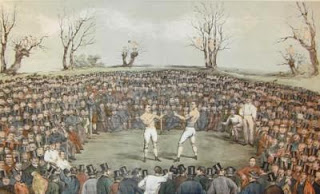 The following blow-by-blow description of a boxing match at Baulkham Hills, near Parramatta, was taken from ‘The Australian’ and gives us an insight into the popularity of boxing in Colonial Sydney and the colourful language of the times. Jack Kable came to the attention of the press after beating Bill Clark in five rounds in a boxing match on Parramatta Road on 20 February 1824 and later he beat Joe Dargin at the Windsor Racecourse in 11 rounds.

“TURN-UP FOR ONE HUNDRED POUNDS A SIDE —BETWEEN KABLE AND GLEW .

“Black spirits and white, Red spirits and grey, Mingle, mingle, mingle, Mingle while you may.”
News of this long since anticipated ,”turn-up” being chalked down as a “dead certainty” for Monday morning last, spread like wild fire in a drouthy summer, and set the Sydney “kiddies” on their pivots all Saturday and Sunday. Every “gymnastified” amateur, each gentle and simple flat and knowing “un” that could muster a “prad,” a “shay,” or a “heavy drag,” might be seen and heard, ” like claps of thunder,” rattling their “tits” along the streets and off along the Parramatta-road from peep o’day on Sunday, and for 3 or 4, and more than 20 hours after: and many a ” cove ” that would not, or could, not raise the wind, toddled it on ” shanks mare,” with, or without a “pal” to while away the journey.

Each Sydney boniface had a bonny and a smiling face, for not a ” prad,” nor a ”heavy drag,” stood idly in his stable; all were engaged in profitable quest, and Parramatta had an ” overflowing benefit.”
Many a Sydney ” swell,” and Windsor “blade,” and “busher,” and “what d’ye call um,” posted thither and showed off their several “gustos” in cut and come again. They blew out their “kites” with the best of liquids and solids that could be had for love or money, throughout all that rising superb “city” of Parramatta; from the lowly timber shed to Andy Nash’s brick “chateau,” and the Red Cow inn of happy memory; for
… there was rum and syllabub,
With lots of hot and chilly grub
To welcome them all with a rub a dub dub.
Strangers came pouring all Sunday into Parramatta, and put the landlords and ladies in the “dumps;” the “rum-customers” became quite a bore. Many had gone with a full intent to snoose out the night there, but few were the downey ones, and not a few were glad to put up towards midnight with a “floorer,” ay, and to be thankful, for the meed.
—Morning— the long expected, morning, big with the fate of Glew and Kable, at length displayed her rosy gills, and increasing notes of preparation become louder and harsher; there was saddling of ‘prads’ and rattling of chaises, and smacking of whips and racing and chasing over highways and byways, tending to the scene of action. Now the embattled plain, be it known, was a level piece of “terra firma” … making part and parcel of Baulkham Hills, four miles or so on the other side of Parramatta, & close to Mr. Pye’s farm. There was the ring, describing a “circumbendibus” of 40   feet, but neither of the men’s friends showed colours, as is usual. The morning gloomed, and the wind was high, but spirits, animal and ardent, were higher than the wind, and the “mugs” of the, amateurs looked rosier than the morn, and their chins new-reaped “‘showed like a stubble field at harvest home.”
— At 8 h. 31 m. p. m. Kable, with his seconds, Bill Dargon and Jack Upton, entered the ring, and was greeted with hearty ‘hurras’ by the Windsor blades, whose favourite, Kable decidedly was.
Glew was not far behind. He came smiling to the ropes and threw up his “castor,” and   the men soon commenced “peeling.” Kable’s supporters, when he had doffed his “togs,” were transported with his fine anatomy; his condition was certainly fine; the “classics” called it beautiful in the extreme; a perfect picture of a man; nor were the Sydney ‘kiddies’ disposed to think indifferently of their man, who, tho’ not quite the “tip top,” was the heavier man of the two. Kable might be said to stand six feet fully, in his stocking vamps, and when in “bang-up” trim, as he was just then, to weigh 14 stone. Glew r?? 5 feet 10, and about 128 avoirdupois.
Both men came to  the ‘scratch’ cool, confident, and full of ‘pluck.’ Betting; at this time was in favour of Glew; the Sydney blader and  israelites backing him 5 and 6 to 4. All was ardent expectutlon among the spectators, whose number now seemed full 1300.
Not a ‘ beak’ within ken, and 1 1/2, minutes to nine o’clock, the choice of ground having been tossed for and won by Kable, both men showed fight. Their attitudes were certainly fine, muscular, and manly, and the fire of intrepidity glanced from their ‘daylights’ Five to 4 on Glew.
Round 1. Some sparring and reciprocal caution. Glew attempting to, close. Kable dodging and keeping him at a respectable distance, this continued for some moments; at length Kable made an impression with his ‘ bunch of fives.’ The first blow returned instanter, and with interest, by Glew. A close and a struggle for the throw, both down, but Glew undermost. This round occupied a good deal of  time, and the Windsor ‘ blades’ were ‘up’ betting six to four on Kable.
2. A good round, no joking, and evident that ‘the best man should win.’ Kable first received a body hit, which was exchanged. Glew went down.
3. Both men came to the scratch determined, and with less show of patience. Kable very cautious; some hard hitting took place, and a rally ensued. Glew was bored down from the superior strength of his antagonist.
4, 5 and 6 were generally in favour of Kable.
8. Glew gave his antagonist a tremendous body blow, which upset him before you could say ‘Jack Robinson’. It was called a ‘ good floorer.’ The friends of Glew seemed to breathe again but no ‘funking’ on the other side. The shouts were pretty general. Betting even. Both men still as good as gold. But in the five following rounds it was evident that Kable’s altitude gave him an advantage; but it would require downright milling and ‘heavy ‘ work, to win him the fight. Glew’s system was good, and when he had an opportunity to get ‘in’ and do execution seldom if ever let it pass him.
16. Glew’s friends thought well of him, he showed good game, his fighting in this round was excellent, and his blows were well administered. In every succeeding round Glew came off second best. His adversary was fresh as a daisy. Glew played like a game cock. Kable made sad work about his ‘peepers’ and ‘bread-basket.’ Glew diminished in strength insensibly, and for the 4 last rounds came to the scratch ‘ all abroad.’
28. Glew fell almost without a blow. Time was called, and Kable with much cheering declared conqueror.

Glew was off in a ‘chay;’ and Kable, who only showed a slight smash on his grinders, toddled off with his backers and a host of the Windsor blades. Lots’ of blunt flew about on the event of this battle; and a good deal of chaffing among the ‘cornstalks’ and the ‘ townies.’