The Mayor and Council of Parramatta, 1938 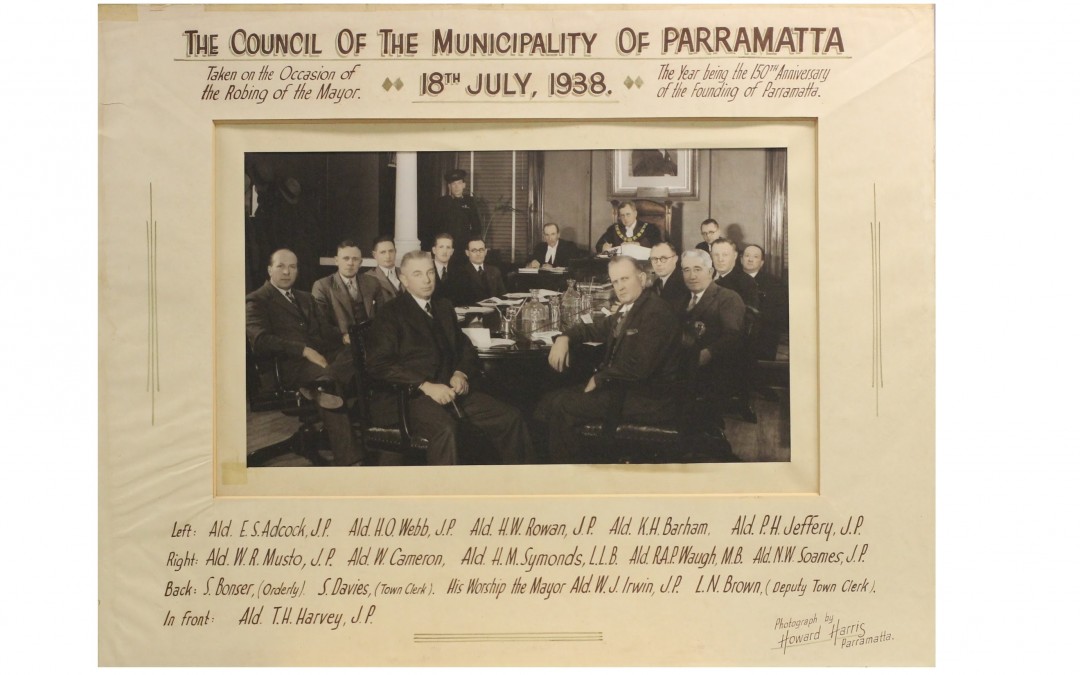 The men in this photograph were responsible for three seminal events in 1938. The first was the organisation of Parramatta’s sesquicentennial (150 year) celebrations.  Work on this had started four years earlier and the thousands who lined the streets were testimony to its success. The second was the successful campaign by the Mayor and Aldermen for Parramatta to be recognised as a city. This occurred on 27 October 1938.

The final event was the ‘Robing of the Mayor’ mentioned in the photograph’s title. Alderman Jeffrey successfully moved, “…that in order to bring Parramatta into line with the leading municipalities of the State and add to the dignity of the position, robes of office, be provided for the Mayor and Town Clerk.”

To commemorate the event the Parramatta Council also published a book which covered the 150th celebrations and paid tribute to the aldermen who had helped organised the event. Titled  ‘The City of Parramatta 150th Celebrations’, it was edited by the local historian and President of the Parramatta Historical Society, James Jervis, and contains some interesting biographical information on each of the men in this photograph.

The Mayor, William John Irwin was first elected to the Council in August 1936 and the following year was elected Mayor. He was described as having had long training in the ‘University of Hard Knocks’ which was acknowledged as having stood him in good stead. He was essentially a self-made man who, after retiring from active business service, devoted himself to the promotion of the welfare of Parramatta.

After fourteen years, his hardware store in Church Street had became one of the largest concerns of its kind in NSW. Mayor Irwin always had great faith in the possibilities of the Parramatta and subsidised the first bus run in Parramatta. He was a member of the Chamber of Commerce and his grandfather, Alderman John Saunders, and an uncle both served on the Council.

Town Clerk, Mr. Sydney Davies
Mr. Sydney Davies was a native of Parramatta and the son of the late Mr. John Davies, who was at one time headmaster of Parramatta North Public School. He spent his working life in the Council’s service, and at the time this photograph was taken had been working in Council for forty-nine years, during which he had been Town Clerk for thirty three. Mr. Davies, was Secretary of the Celebrations Committee and  an inveterate autograph hunter. Apparently no visiting “lion” had a chance of escaping him.

He went to England as a Light Horseman in 1897 as a member of the contingent which attended the late Queen Victoria’s Diamond Jubilee celebrations. Dr. Waugh served as a medical officer during World War One, with the rank of Colonel.

Alderman, W. R. Musto
Alderman W. R. Musto was regarded by his contemporaries as the “father of the Council” as he had spent thirty odd years there. He was an engineer by profession and was elected to the Council in 1922.

His father was a Councillor of the Wandsworth Borough Council. Musto did a lot of charity work for the Friendly Society and was Secretary of the Parramatta Progress Association. Overall, he was active in public affairs for over thirty years. During World War One, he was engaged in munitions work at the Austin Motor Works in England, and also at Ponders End Shell Works. Alderman Musto was a rugby union player in his younger days.

Alderman, William Cameron
William Cameron was one of the senior members of the Council with many years of experience in civic life. He was born and educated in Parramatta and trained for the building trade, before
establishing his own business.

He did charity work for the Friendly Society matters, particularly in the Foresters, of which lodge he was at one period Chief Ranger. He was President of the Friendly Societies’ Dispensary. His
favourite sport was bowls, and he was a member of the local club for many years.

Alderman, Thomas H. Harvey
Thomas Harvey was a native of Parramatta, and was educated at Parramatta South School. At the time this photograph was taken he was Managing Director of T. H. Harvey and Sons Ltd.
During World War One, he saw three years war service. At one period he was on the committee of the School of Arts and his favourite sport was golf.

Alderman, H. M. Symonds
H. M. Symonds was born in Ashfield but was educated at Parramatta High School, and the University of Sydney, where he graduated in law. Mr. Symonds practised law in Parramatta from 1930 and acted for the Justice Department in the Children’s Court cases. His sporting interests were tennis and golf.

Alderman, Horace O. Webb
Horace O. Webb was a native of Parramatta and, as a master builder, worked on many of the buildings in the district. He was a member of the Parramatta Harriers and entered many running events.
Cycling, boxing, and racing were his main hobbies. In 1927 he is reputed to have owned the fastest racing car in New South Wales.

Alderman, E. S. Adcock
E. S. Adcock was born in Lincolnshire and came to Parramatta in 1914, where he established a
successful business. He was a keen business man and contributed greatly to the development of Parramatta as a business centre. Mr. Adcock was a member of a small group of business men who subsidised Parramatta’s first bus service from outlying centres.

Alderman, Neil W. Soames
Neil W. Soames lived in Lithgow before coming to Parramatta and received his early education at Kogarah. He conducted a successful produce business and maintained a number of property
interests. Mr. Soames saw four years’ service in World War One, where he was badly gassed. He was also one of the original members of the Parramatta Iona Football Club. By 1938 he had already served ten years as an Alderman. Mr. Soames’ father was once Mayor of Prospect and Sherwood Council.

Alderman H. W. Rowan
H. W. Rowan, F.C.A., F.F.I.A., F.A.C.A., was born in Wellington, and came to Parramatta in 1924, when he commenced practice as an accountant. He was President of the local Chamber of
Commerce. Mr Rowan was Honorary Auditor of a number of local institutions, including the School of Arts, Agricultural Society, Parramatta branch of Crippled Children’s Association and the
Parramatta Hospital Auxiliary.