At the end of World War One a number of weapons captured form German, Austria/Hungary, and Turkish forces were rounded up to serve as gifts to townships across Australia. While committees were set up to oversee the distribution to townships and cities some of these were selected to form what is now the Australian War Memorial collection, and others were given to Army units linked the guns capture. It was also suggested that some of the smaller weapons be allocated to schools, although it appears the then Minister of Education stepped in to stop this happening.[i] Even so guns did find their way to Scouts groups and to some private schools, like King’s College.

The type and size of the weapon allotted usually depended on the size of the town and conditions for allocation varied between States. The debate about distributing a gun to Parramatta seems to have happened in January 1921. It appears that around this time the NSW allotment of 20 guns, 10 trench mortars, and 40 machine guns was announced. [ii] All of these had been captured by NSW troops both on the Western Front and Palestine and the newspapers of the period make it clear that the Lord Mayor and the aldermen were at loggerheads with the State Government on this matter.[iii] In January J. F. Bradley, then Mayor of Woollahra called a meeting which invited 52 municipalities to discuss the way the trophies were to be distributed and make a recommendation to the ‘State War Trophy Committee’.[iv]

The issue appears to have been the rejection of the entire offer by the Lord Mayor and members of City Council. The meeting on January passed the following motions. That each municipality and shire should receive the custody of a war trophy. That the decision of the City Council was not that of the people of Australia generally. The Mayor of Parramatta said he had been asked by his Council to express their disgust at the actions of the City Council. They then agreed to form a committee, which included the Mayor of Parramatta, to lobby for the allocation of the weapons.[v]

In February 1921 a list of War Trophy’s recommended by the Mayors and Presidents of Shires Committee was published in the Cumberland Argus. This list included: a 75mm trench mortar captured by the 17th Battalion on 5 November 1917 at Broodseinde Ridge during the 3rd Battle of Ypres for Granville; a trench mortar captured by the Australian Light Horse during the closing phase of the Palestine campaign for the King’s School, and a 104mm gun captured by the Light Australian Horse in the Palestine campaign of 1918 for Parramatta township.[vi]

By May they had obviously met with some success for according to the Argus 4 May 1921 the Military Forces of the Commonwealth informed Parramatta that their gun was ready to be forwarded. The Mayor had lobbied for one of the bigger guns and as a result the committee were forced to call a meeting to decide on an appropriate location.[vii]

Ten days later a 105mm Gun (serial number 7789) reputedly captured by the First Australian Light Horse during operations in Palestine in 1918, arrived. [viii] But it was not perhaps quite what everyone expected for there were some, like the reporter for the Cumberland Argus, who commented on its condition saying … it looks a rusty piece of ordinance.[ix]

One thing is clear however, it was not the ‘Messines Gun’ which one ex-digger had talked about back in March, 1921. This gun he said had been earmarked for Parramatta as early as 1917 soon after it had been captured on 17 June 1917 by the 13th Infantry Brigade (4th Australian Division).[x] It was a light artillery piece known at the time as a ‘whizz-bang’ but whether it was or was-not allocated to Parramatta remains unclear but was certainly not the gun acquired by the Mayor.

The problem of its being too big to be placed in front of the Town Hall was resolved by a decision to place it in the flower plot next to the Centennial Fountain.[xi] The gun remained a part of the Parramatta landscape for the next 33 years although at some stage over this time it was moved to Alfred Park, near Victoria Road. 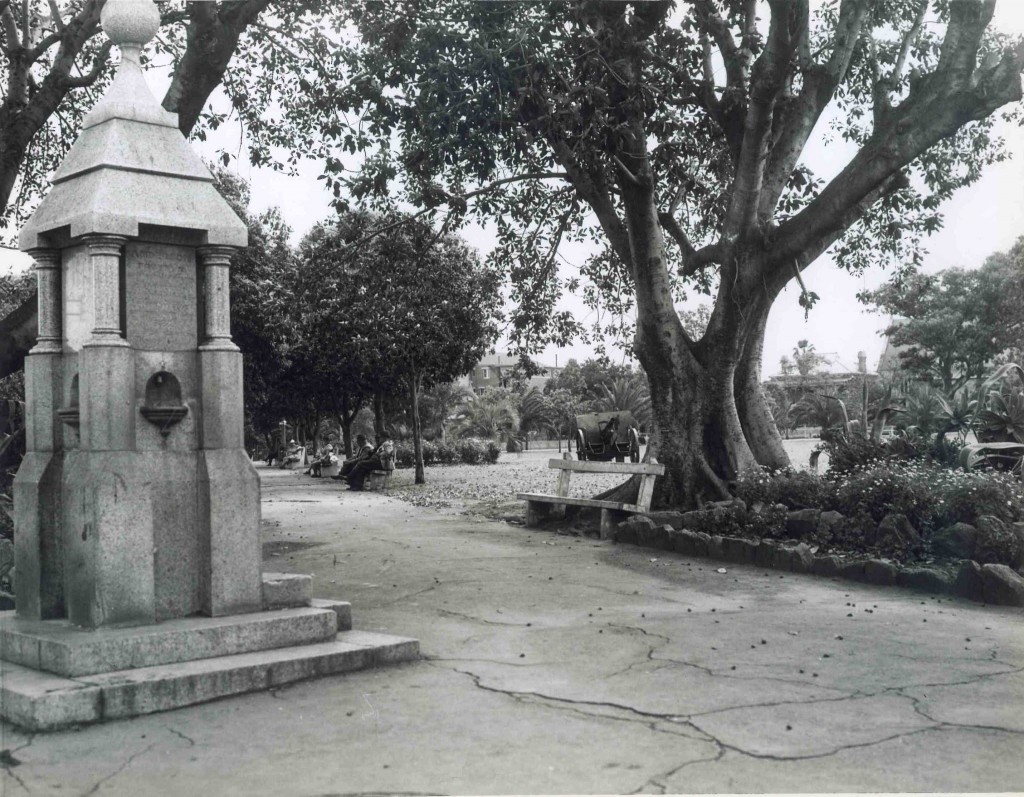 Finally in 1954 the Returned Soldiers League, City of Parramatta Sub-branch wrote to the Parramatta Council recommending that the gun be removed as a part of the beautification project being undertaken at Alfred Park.[i] In July the Council accepted this proposal and the gun was sold for scrap to Messrs Albert G. Sims Pty Limited, for the sum of 5 pounds. This money was then donated to the Children’s Christmas Party for 1954.