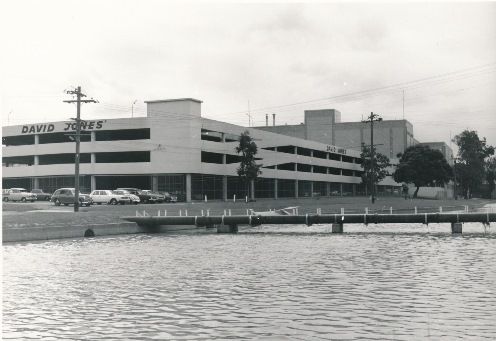 The David Jones building on Church Street Parramatta was a permanent fixture since the early 1960’s and was seen as a bright star in the DJ’s galaxy. Yet over the years this shining light unfortunately lost most of its sparkle and in September 2002 the Daily Telegraph even referred to it as being a … dark and spooky store. In June 2013 the Meriton group had started the demolition of the building ending a part of Australian retail history.
In 1959 it was decided that the stone house of Mr J. K. S. Houison, President of the Parramatta Historical Society, was to be demolished to make way for the new David Jones department store. This new store would cost 2 million pounds before being opened in November 1961. The opening was met with much fanfare with 400 people per minute entering the store for when it opened its doors for the first time. With 220,000 square feet inside and an outside surrounded by lawns, willow trees and a car park it claimed to be the “biggest outer metropolitan store in the Commonwealth’.

The inside adopted a “quiet but colourful and cheerful décor with a number of shops-within-shops” but after twenty five years of success the business started to decline. David Jones executives criticised surrounding retail outlets and rumours of a move and a new relationship with Westfield and then in 1989 there was the shock announcement that David Jones would be moving from the riverside store to a Parramatta Westfield Shoppingtown, with DJ’s eventually moved there in 1996. 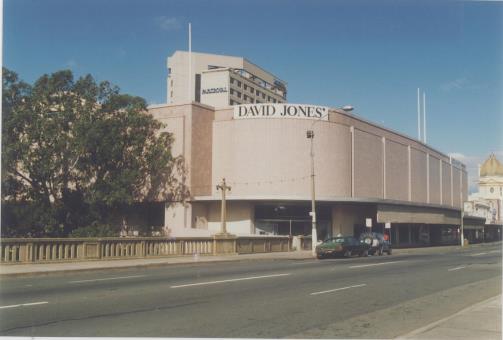 The old David Jones building then entered into a series of relationships with a variety of owners, business models and concepts. It was re-branded as the Riverside Centre in the late 1990’s and housed offices, a gymnasium, childcare centre, restaurants and a coffee shop. Then in 2001 David Jones again used the building in the form of gourmet food business called the Food Chain. But by 2002 David Jones closed this store and when opened again its next incarnation was a factory outlet building. 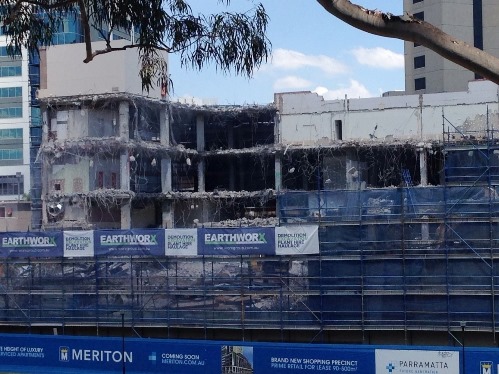 By 2010 over 50 retailers had moved out and Parramatta Council was calling for the redevelopment of the foreshore and the need for a boost to the economy. Many councillors called for a mix of residential, retail and commercial to energise the Northern Parramatta area. In September 2010 Meriton purchased the David Jones site for $36.5 million and developed their plan for a twin-tower high-rise building with shops, residential accommodation and a supermarket. In 2011 the plan was revealed which included a public square and terraces running down to the river.

In July 2013 the bulldozers were bought in and by December the demolition of the David Jones building was nearly complete.

1959: Announcement that the stone house of Mr J. K. S. Houison, President of the Parramatta Historical Society, and known locally as the ‘Bond House’, is to be demolished to make way for a new David Jones department store.
1961: Plans for the new 2,000,000 pound department store on the banks of the river are released
1962: David Jones Store opens to 400 per minute entering the store with over 4000 people watching the opening ceremony.
1963: Commemorative Stone is set to mark old building, the ‘Bond House’ that was demolished to build the David Jones store.
1986: David Jones celebrates 25 years of business in Parramatta
1989: David Jones announces move from its riverside site in 1991 to the new Westfield mall.
1994-1998: In these years the building was owned by various companies including Friendship Pty Ltd and ICA Property.
1998: Building bought by ICA Property and to be turned into $40 million Riverbank corporate Centre. The site was previously owned the Friendship Pty Ltd.
2001: David Jones to starts an upmarket venture called ‘Food Chain’ at the Riverbank Centre.
2002: ‘Food Chain’ store closes
2008: 2010: David Jones building brought by Parramatta Site Developments Pty Ltd a subsidiary of Professional Investment Services. During this time the building is a factory outlet
2010: Meriton Group buys the David Jones building
2011: The Twin Towers design by Tony Caro approved.
2013: Meriton relinquishes its 50 year lease over the council owned car park and other land providing for wider foreshore access.
July 2013: Renewal of old David Jones site starts.