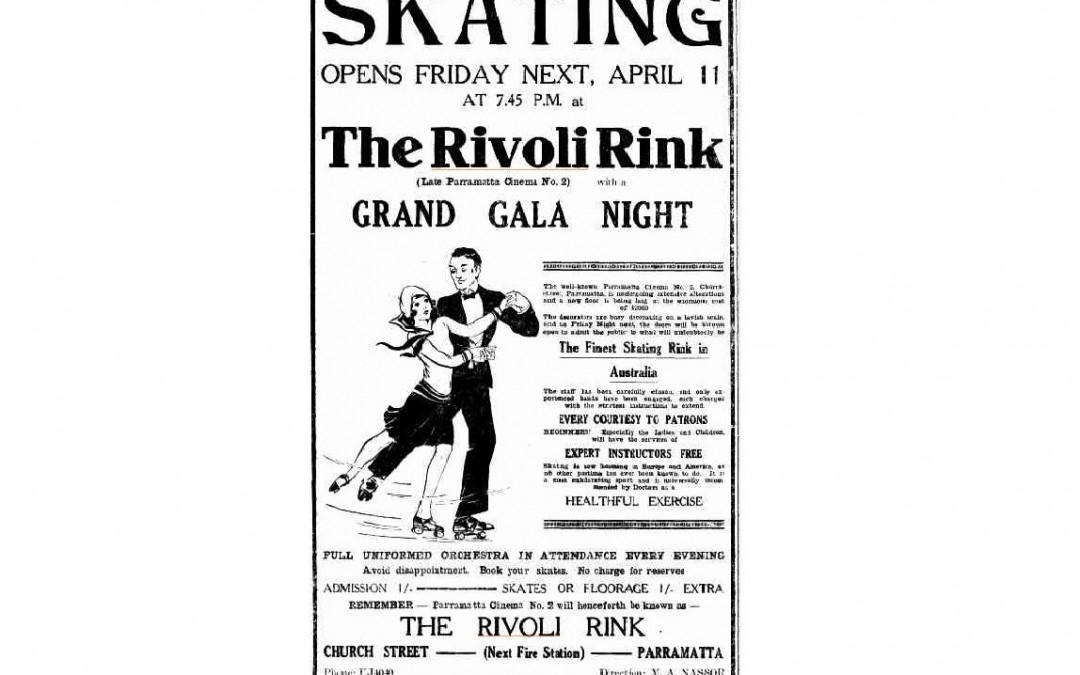 The nondescript, bureaucratic facade of the fourteen storey office block located at 130-134 Church Street, near the old Parramatta Fire Station, betrays the site of what was once a lively social hub for residents of the Parramatta district. Prior to the erection of the multi floored building in 1973 there stood on the same site the Rivoli Dance Hall. The “Riv” through its life attracted large crowds as a major entertainment venue. At various times it operated as an open air picture theatre, cinema, skating rink, boxing and wrestling stadium, dance hall, and markets.

It was Mr George Ralph, a well know Parramatta businessman, who first opened an open air picture show on the site on 14 October 1911.[1] By May the following year a roof was constructed for the theatre and the building festooned with electric lights. The brightly lit theatre which was like a beacon on Church Street was named the “The Star Picture Palace”. The popularity of the “moving picture show” was well established by this time with two other cinemas operating in Parramatta despite predictions by a section of the public that “cinematographics” was just a passing craze.[2]

In 1923 ownership of the The Star was acquired by Parramatta Cinema Ltd.[3] The Star became known as Parramatta Cinema No.2 until 1930 when it was converted to skating rink and renamed the Rivoli. At this time it was acquired by a newly formed company, Western Suburbs Cinema, which had taken over ten cinemas in the western suburbs.[4] The entire interior of the theatre was transformed with the laying of a new raised floor worth 2000 pounds, an enormous investment for this time.[5] The rink was so popular that on one night in July 1930 over 1000 people attended a skating carnival held at the Rivoli. It was transformed into a virtual fairyland, “on the floor hundreds of skaters in glittering costumes made a kaleidoscopic picture”.[6] Hockey on wheels was also introduced with the first game of an inter rink competition played between the Rivoli and Centennial (Bondi) in May 1930. Rivoli came out winners 2-1.[7]

The work to convert the Rivoli to a skating rink was carried out by the reputable local building firm Webb Brothers. Horace Webb the founder of the company invested in a number of skating rinks including in New Zealand where he spent two years. On a return trip to Australia in 1931 Webb saw the potential in the Rivoli as a dance and amusement hall and partnered with Mr L Harper to take over the Rivoli. They renamed it the Garden Dance Palais, however, in 1932 the name Rivoli was revived and it became the “Rivoli Dance Palace” with huge Old Time Dance crowds attending on Saturday nights.[8]

The Rivoli was not only a skating rink and dance hall. In December 1930 it opened on Friday nights as a boxing stadium. Mayor Ohlesen opened the stadium declaring “Boxing is a clean, manly sport….and I am sure if properly conducted, there can be little exception to it”.[9] Boxing bouts were interspersed with wrestling bouts and vaudeville acts. From that time the Rivoli was commonly referred to as Parramatta Stadium whenever boxing or other sporting events were held. So for the next 12 years the Rivoli in its various guises and names became the “rendezvous of dances from all parts of the district”[10] as well as a major indoor sporting venue for the Parramatta district.

In an attempt to capitalise on the Rivoli’s success a new company, Rivoli Entertainment, was formed in 1939. The company, still run by the Webb family, put forward a proposal to erect a two storey building on the site of the old Rivoli which would include a skating rink on the ground floor and a cabaret and ball room on the first floor at a cost of 30,000 pounds.[11]

It appears however that the new structure was never constructed for at the height of its popularity Parramatta’s favourite dance venue was commandeered by the Military during the Second World War as an Army kit store. It remained in the hands of the military until late 1946 by which time Parramatta residents were crying out for a suitable ballroom for the area. It was handed back to Horace Webb, in 1946, in very poor condition. 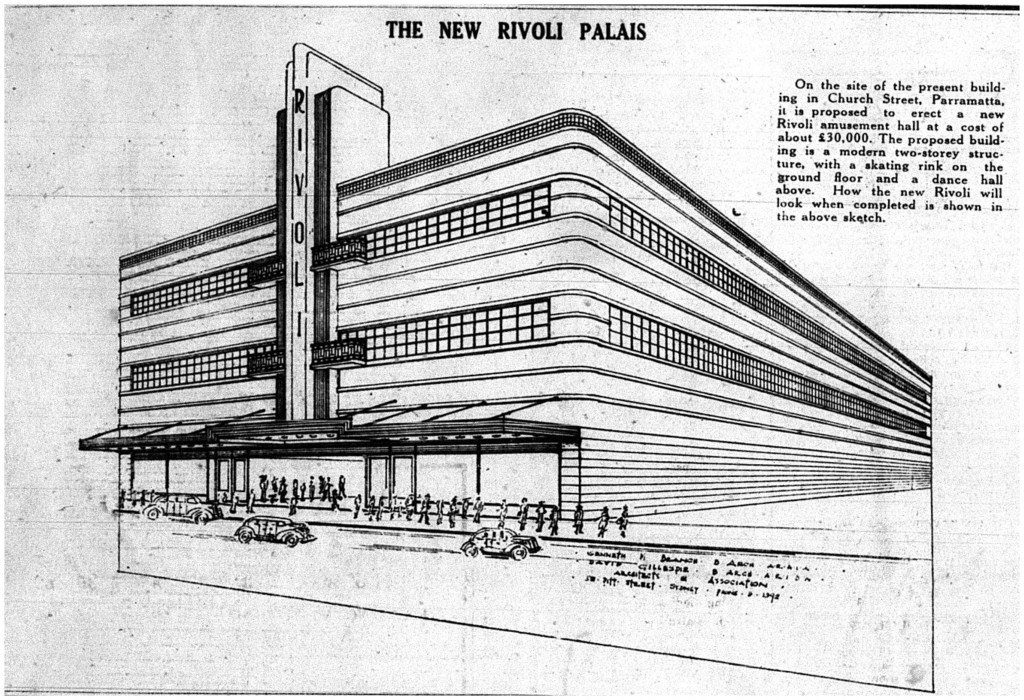 The property was purchased by Milk Bar Proprietor Jim Joseph Lynch who converted it to one of the most modern dance halls in the area. On 14 December 1946 the doors of the refurbished Rivoli reopened with a crowd of 800 people attending the opening night, dancing to the music of a 14 piece orchestra led by star vocalist Norma McFarlane.[12]

Through the 1950s until the 1960s boxing, Old Time Dancing and Friday and Saturday market days were the Rivoli’s main attractions. Old Time Dance remained popular “despite the advent of rock ‘n’ roll and The Twist”.[13] Radio 2UE, in 1956, began broadcasting Old Time Dance programmes recorded directly from the Rivoli. Friday night dances were taped and broadcast on Sunday night, giving people who were at the dance the opportunity to hear the music once more. The programme was relayed to over 50 other radio stations throughout Australia. Broadcasts ended in 1968.[14]

The Rivoli could not escape the urban and commercial growth of Parramatta. Located on prime real estate it was purchased by a development company in 1969, knocked down and office building constructed in 1973.
References