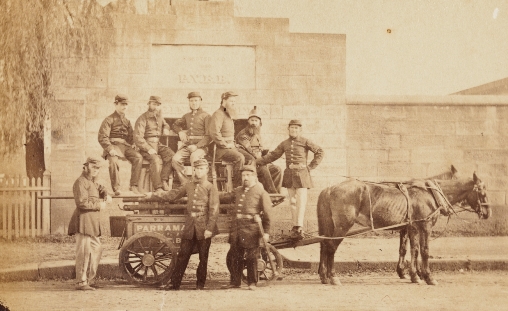 The Parramatta Volunteer Fire (PVF) Brigade was formed in 1859 at the instigation of Mr. Menser, who went on to become its first Treasurer. The Empire from November 1860 contained the following article on the PVF’s formation by a Mr. Shackles … it will be remembered that on the 17th October, I859, some fourteen or fifteen gentlemen met together at the Union. Inn kept at that time by Mr Nathaniel Payne for the purpose of taking the necessary steps for forming themselves into a volunteer fire company, for the protection of life and property in this town.

Mr. Shackles also pointed out that the small centrally situated building where they met should be pointed to as one of the first public buildings raised by a body of their fellow townsmen. They were also given for practice and in cases of emergency a little engine, stationed at the Barracks, George Street.[1]

The force was evidently well supported and held its 20th anniversary in the Domain. The procession through streets included the Insurance Brigade under Superintendent Brown, Superintendent Camb of Volunteer Brigade with a No. 2 engine followed by a luncheon attended by superintendents from Woollahra, Paddington and even Mudgee. Over these twenty years they worked out that there had been 60 fires in Parramatta and of these 5 were serious. Perhaps more importantly they were reputed to have saved over 30,000 pounds worth of property event though they had no water supply and instead depended on wells and water carts.[2]

By 1895 the Evening News announced that the Colonial Secretary, Mr. Brunker, had promised a grant of £100 to the No. 1 Parramatta Fire Brigade for the purpose of erecting a fire station after being asked by Mr. O’Reilly, the ‘ member for the district.[3] Two years later a deputation representing the PVF Brigade waited upon the Acting-Premier to ask for a grant of £500 pointing out they were protectors for the many Government buildings in the district, such as asylums. Mr. Brunker’s reply acknowledged the good work and the importance of the Parramatta district and would be glad to consider their representations.[4] 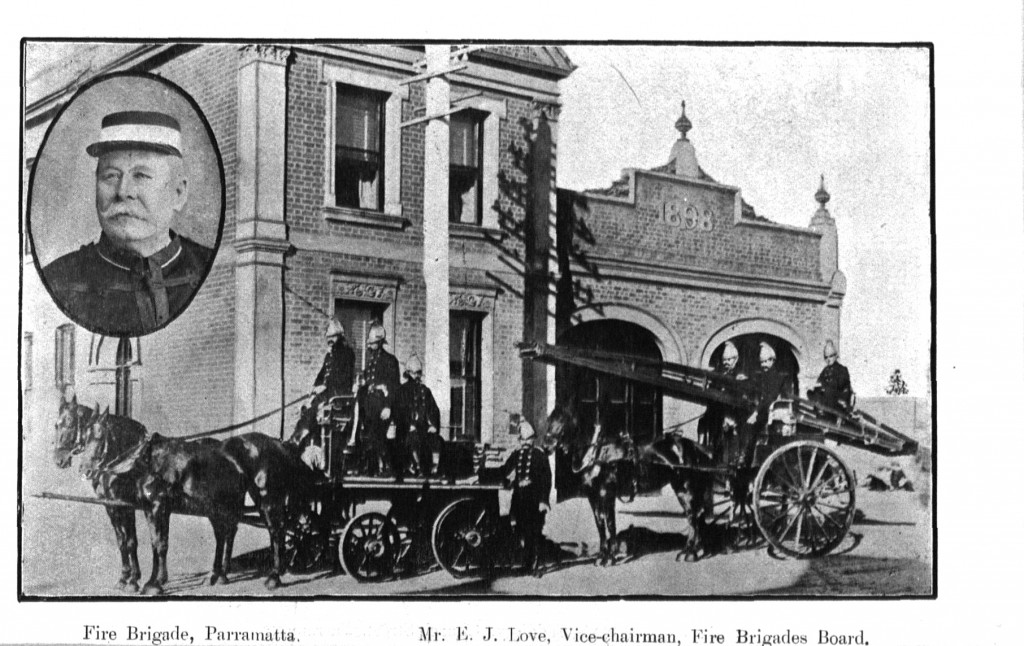 Presumably they had some success as the picture above is from the book, Beautiful parramatta published in 1905. Even so by the time of the fortieth annual meeting of P.V.F. Brigade Mr. E. J. Love, its president, said they had £44 17s 9d in their general account, and £10 18s 6d to the building fund. Over the course of that year, 1899, they answered 15 alarms only two fires of which were serious, but the good work was continuing and now all 18 members were insured by the Colonial Mutual Fire Insurance Co.[5]