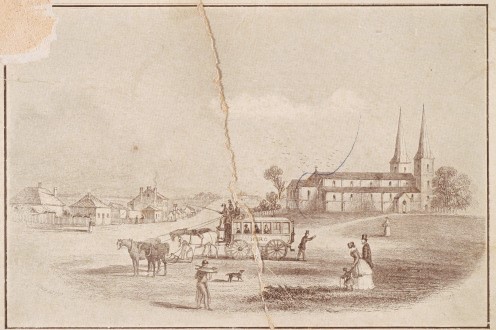 … a continuation from Part 2

The section at the south-eastern corner of Church and Phillip Streets was granted to Captain Phillip P. King on June 30, 1823. A substantial cottage stood on this site hence the issue of a grant. On July 31, 1823 this building was advertised as to let. It was then said to be occupied by the Rev Thomas Hassall, son of Rowland Hassall. The property was advertised as for sale in the “Herald” of March 15, 1838, and it was then occupied by Dr. Bute Stewart, a well-known medical man of early Parramatta.
The land between Captain King’s portion and George Street was … granted to Richard Rouse on June 30. 1823. Rouse applied for a grant on May 27, 1823, on the ground that the buildings were agreeable to the general unit. Rouse evidently occupied the building, as he was Superintendent of Government Works for many years in the old town.

Mr. Rouse leased the house to the Government for use as Courthouse in 1824 and it was used for this purpose for many years. When the building was vacated by the Government, Charles Fairs announced in the “Herald” of March 27, 1839 that he would carry on business in the premises.

The land at the south western corner of Church and George Streets has a somewhat varied history. It is impossible to slate for what purpose the barrack which stood on this site wii originally used. Some years after the building was demolished, one, Ann Ewers, occupied it, apparently with the consent of the then Surveyor-General, John Oxley, and in 1832 a small wooden house stood on the site. This occupation was irregular, and no lease was issued. It was in fact one of the reserves made 1823. The original intention appears to have been to erect a watch house on the land, but the idea was abandoned, and soon after it was set aside as a market reserve. Dr. Lang applied to the Governor for a site for the erection of a church, and this land was granted for thi. purpose. At this stage, William Aird, Superintendent of Works here in the thirties, entered a claim which he was able to substantiate. This claim was upheld and Aird became the owner. The block was subdivided in I842, and the corner section, purchased by William Paisley for £400.

A entry in Macquarie Diary (Mitchell Library) throws some light on the history of the next block in Church … “25 November, 1820: I this day promised Mr. Sherwln, Chief Constable of Parramatta, an allotment of ground in Church Street,adjoining the barrack of the Superintendent of Stock, for building on consisting of eighty feet in front on condition of his erecting thereon forthwith a good two-storey brick house of fifty feet in length.”

This allotment was formally leased to William Sherwin on June 30, 1823, so It b probable that the leasee had erected a building of some kind on it. J. Tingeombe acquired the land, and having constructed a house, which he considered worth £1000, applied for a grant in April, 1836. The Surveyor-General did not consider the building worth £1000, and the matter was referred to the Government architect.

Adjoining Sherwin’s block was a section leased to Charles Whalan. This lay between James Wright’s lease, nt the corner of Macquarie Street, and Sherwin’s land.

A section at the corner of Macquarie and Church Streets, the south eastern corner, was granted to Daniel Cooper on June 30, 1823. From this it is evident that a valuable building had been erected on the land. It was advertised for sale on December 5, 1827. A seven-roomed two storey house stood on this section, and was then owned by R. Howe, of the Sydney Gazette.

On a portion adjoining stood the Macquarie built watchhouse. As has already been pointed out earlier in that paper, tbe town lands already occupied were leased to various individuals In 1823. At the same period a number of town blocks were granted to the persons named, as they had erected substantial buildings on the portions occupied:

Between 1823 and 1830 no further grants appear to hnvc been made but from 1830 the town lands were gradually sold to persons wh0 had, in many cases, purchased from leaseholders the leases issued during Brisbane’s regime. The town lands of Parramatta provided much work for the Court of Claims, which was set up to deal with cases arising out of land disputes, and even at this late date, the Parramatta lands provide work for the legal gentlemen.

James Jervis, The Development of Settlement in the Town of Parramatta, Parramatta Historical Society, Journal and Proceedings, 1935