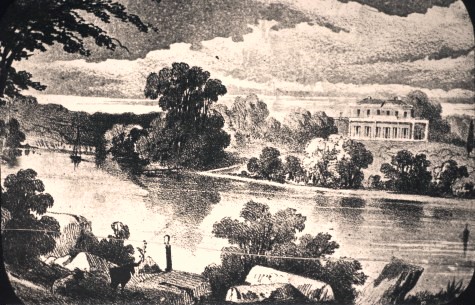 December 7, 1791, … Went to Schaeffer’s farm. [see history of this site] I found him at home, conversed with him, and walked with him over all his cultivated ground. He had one hundred and forty acres granted to him, fourteen of which are in cultivation, twelve in maize, one in wheat, and one in vines and tobacco. He has besides twenty-three acres, on which the trees are cut down, but not burnt off the land. He resigned his appointment, and began his farm last May; and had at first five convicts to assist him: he has now four. All his maize, except 3 acres, is mean.

This he thinks may be attributed to three causes: a middling soil, too dry a spring, and from the ground not being sufficiently pulverized before the seed was put in it. The wheat is thin and poor: he does not reckon its produce at more than eight or nine bushels. His vines, nine hundred in number, are flourishing, and will, he supposes, bear fruit next year. His tobacco plants are not very luxuriant: to these two last plants he means principally to direct his attention, he says (and truly) that they will always be sale able and profitable.

On one of the boundaries of his land is plenty of water. A very good brick house is nearly completed for his use, by the governor; and in the meantime he lives in a very decent one, which was built for him on his settling here. He is to be supplied with provisions from the public store, and with medical assistance for eighteen months, reckoning from last May. At the expiration of this period he is bound to support himself; and the four convicts are to be withdrawn. But if he shall then, or at any future period, declare himself able to maintain a moderate number of these people for their labour, they will be assigned to him.

Mr Schaeffer is a man of industry and respect-able character. He came out to the country as a superintendent of convicts, at a salary of forty pounds per annum; and brought with him a daughter of twelve years old. He is by birth a Hessian [from the German State of Hesse], and served in America, in a corps of Yaghers [corruption of the German term for huntsman] , with the rank of lieutenant.

He never was professionally, in any part of life, a farmer, but he told me his father owned a small estate on the banks of the Rhine, on which he resided, and that he had always been fond of looking at, and assisting in his labours, particularly in the vine-yard. In walking along, he more than once shook his head, and made some mortifying observations on the soil of his present domain, compared with the banks of his native stream. He assured me that (exclusive of the sacrifice of his salary) he has expended more than forty pounds, in advancing his ground to a state in which I saw it. Of the probability of success in his undertaking, he spoke with moderation and good sense. Sometimes he said he had almost despaired, and had often balanced about relinquishing it; but had often been checked by recollecting, that hardly any difficulty can arise, which vigour and perseverance will not overcome. I asked him what was the tenure on which he held his estate. He offered to shew the written document, saying, that it was exactly the same as Ruse’s. I therefore declined to trouble him, and took my leave, with wishes for his success and prosperity.

“Near Mr Schaeffer’s farm, is a small patch of land, cleared by Lieutenant Townson, of the New South Wales corps, about two acres of which are in maize and wheat, both looking very bad. ” Proceeded to the farm of Mr Arndell, one of the assistant surgeons. This gentleman has six acres in cultivation, as follows: rather more than four in maize, one in wheat, and the remainder in oats and barley ; the wheat looks tolerably good, rather thin, but of a good height, and the ears well filled. His farming servant guesses the produce will be twelve bushels, and I do not think he overrates it. The maize he guesses at thirty bushels, which, from appearances, it may yield, but not more. The oats and barley are not contemptible; this ground has been turned up but once; the aspect of it is nearly south, on a declivity of the river, or arm of the sea, on which Parramatta stands: it was cleared of wood about nine months ago, and sown this year for the first time.