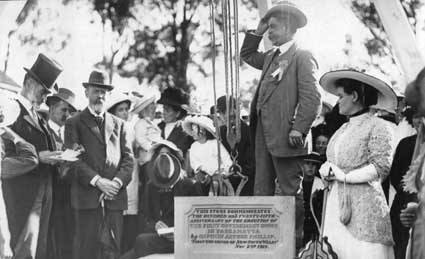 The Australian Red Cross was established in 1914 by Lady Helen Munro Ferguson when she formed a branch of the British Red Cross. The Parramatta branch was formed in early 1915 when a meeting was called in the local newspaper. 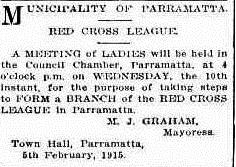 Many prominent people were involved in organising assistance for the war effort. Mary Cook, wife of Joseph Cook (Prime Minister 1913-1914 and Leader of the Opposition 1914-1917) was very active in the Red Cross and in Cook’s electorate of Parramatta. She was elected President of the Parramatta Red Cross at the inaugural meeting, and continued to be active throughout the war and afterwards.

“She spoke at meetings there in the 1919 election campaign, and also deputised at ministerial events, such as the unveiling of an Honour Roll dedicated to the 1914–18 servicemen and women … In 1918 Mary Cook and Mary Hughes attended events in London for the Imperial War Conference and the Cooks made a triumphal return to their home towns in Staffordshire. Both women represented their Red Cross branches. With Margaret Fisher, wife of Australia’s High Commissioner, they were also involved in work for Australian troops in France, and their families in Australia. During Joseph Cook’s term as High Commissioner, Mary Cook played a key role for the Australian Red Cross Society, including representing the Society at a meeting of the International Red Cross Board of Governors in Paris in 1923.”

The Parramatta branch was very active during the war, helping to organise much needed supplies and fundraising. One of the first activities they held was in Parramatta Park where they raised money to send to Egypt for sheepskin waistcoats. They also provided many items needed at the front and for injured soldiers and their families. Items such as clothing, bed linen, towels, chairs, soaps, candles, cards, tobacco, magazines, nibs, bandages, wool and slippers were provided by the Parramatta Society of the Red Cross. It was regular practice to advertise events and fundraising opportunities in the local paper and to thank community members who were active and contributed their time and / or services .

One of their first initiatives was to manage a field hospital in Liverpool. This was established in July 1915. The hut had 14 beds and the Parramatta Red Cross helped to fit it out with all the required furniture and supplies. They assisted in raising money, made personal donations and visited the patients. Some other typical services included a linen department where Red Cross workers made bandages, the spinning group and the knitting circle all contributed much needed items.

“The Knitting Circle, under the supervision of the late Mrs W.S.Brown, assisted by Miss Houison, produced many comforts for our soldiers, in the form of socks, mufflers, caps, etc.”

Other methods of assistance involved the whole community and one such example is illustrated in an article in The Cumberland Argus, April 1918 when the Red Cross organised a fund-raising day called Big Parramatta. It is indicative of the nature of their work and appeal to the broad community.

“Red Cross day in Parramatta is going to be a very big thing. Arrangements are practically complete. The local Red Cross executive and members have been working very assiduously and the utmost attention has been given to every detail, no matter how minor. The joint- honorable secretaries, Mrs B.N. Dunn and Mrs K.Burnell have a fine band of energetic workers around them each vying with the other to seize every opportunity and means of increasing Parramatta’s contribution to a fund the claims of which are such that they scarcely need reiteration. But at such a time as this the claims of the noble Red Cross cannot possibly be too appealingly placed before the public. The significant, world-wide, humanitarian work of the organisation is exemplified every day of our existence at present and those who are placed in the unfortunate position of having to use the Red Cross are loudest in their praises of what that organisation is doing. Just at present, whilst the big offensive in Europe is raging with awful violence, with scores of thousands of noble soldiers, friend and foe alike, calling out for assistance and succour, this mighty Red Cross is even more hard-put-to-it than ever before. Their splendid deeds in the past have been made a possible achievement only by the generous and noble response in money and kind from the people, but despite that generous response still more money is needed. And to get that money is what ‘The Day’ has been promoted for.

It is hoped that in Parramatta there will be a really good response. These districts have perhaps used the Red Cross organisation as much as other centres, and with our big population and large percentage of suffering soldiers, it would surely not be expecting too much to hope for the community to band themselves together in enthusiastic cooperation and unison in an endeavour to make the result one worthy …. Let us hope that all petty squabbles and bickering will be dropped locally, if only just for ‘The Day,’ out of respect, love and admiration for the soldiers of all classes and creeds and opinions who are banding together as one man at the present time on the other side of the world, so that we will now and hereafter have a free world to live in.

Street Stalls have been arranged for Friday, and will be located as follows:— St.John’s Church, at Railway Bridge, Church-street. Red Cross in front of the Town Hall, Refreshment Rooms, by the Methodist Church in Jubilee Hall; South Public School at Fountain Bowling Club, at Ferrier’s corner (Church and Macquarle streets); St.Andrews in front of St. Andrew’s Church; War Chest, at Terry’s corner; St.Patrick’s at Bank of NSW (corner Church and George streets); All Saint’s, at Alfred Park (Church and Pennant streets). North Public School, at North Parramatta Post Office; Rosehill Public School at Harris Park railway station. Each stall will have six collectors with Red Cross boxes, and the public is asked to fill and re-fill these as rapidly as possible.

Special attention has been paid to the amusement side of the business. From 12 noon until 9pm several bands (for which Lieut. Howe is arranging) will discourse enlivening music from the vicinity of the different stalls. In addition, high-class concerts are being arranged by Miss Lucy Brutnoll. The performers (all leading artists) will be mounted on a moving lorry, and will travel about among the different stalls, and perform in their best style to the crowds which are sure to gather around there from 7 till 9 pm.

It has been suggested that local owners of motor-cars might add to the effect and success of the function by decorating their cars and lending assistance in the collections, whilst the business people are asked to be unsparing in the decoration of their premises. Private houses should also display bunting. The attention of the members of the local Red Cross branch is directed to their secretaries’ notice in our advertising columns, which alters the night of this week’s meeting from Wednesday to Thursday.”