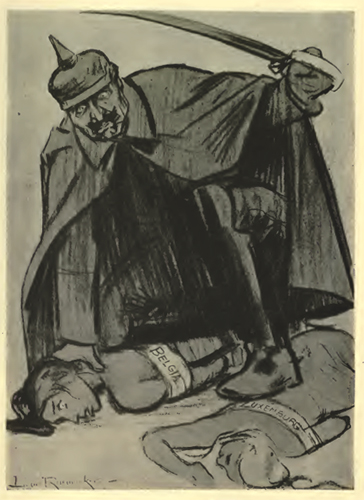 This is how I deal with small fry, Louis Raemaeker, 4 August 1914

We are now in a state of necessity, and necessity knows no law. Our troops have occupied Luxembourg and perhaps are, already on Belgian soil. Gentlemen, that is contrary to the dictates of international law. It is true that the French Government has declared at Brussels that France is willing to respect the neutrality of Belgium, so long as her opponent respects it.

We knew, however, that France stood ready for invasion. France could wait, but we could not wait. A French movement upon our flank upon the lower Rhine might have been disastrous. So we were compelled to override the just protest of the Luxembourg and Belgian Governments. Von Bethmann-Hollweg, Reichstag, Berlin, 4th August, 1914.