Councillor John Chedid was elected Lord Mayor of Parramatta on 29 September 2010, having served as the Liberal Councillor for the Elizabeth MacArthur Ward since first being elected to Council in 2004.

John is a local who grew up in Parramatta, attending Rosehill Public Primary School and Arthur Phillip High School. John and his wife Monty continue to live in Parramatta area and have three children, Bianca, Lanya, and Josef.

A scientific officer by profession John has worked for the past 15 years in the Medical Health Industry, focusing on the clinical research and evaluation of diagnostic products.

John has introduced a number of policies that have been enthusiastically received by the community. During his time on Council John has successfully campaigned for the removal of graffiti walls, the prevention and removal of illegally dumped rubbish, fee relief for senior citizens, reactivation of our river foreshore and our safer city program.

John is passionate about local issues and is heavily involved in the local community at the grassroots level. His priorities are supporting youth, seniors, small business, local charities and volunteers.

As a volunteer for the Police and Community Youth Club for over 15 years, John has been involved in fund raising and youth programs in close collaboration with the New South Wales Police.

John also enjoys helping senior citizens and has been a strong supporter of Meals on Wheels.He is actively involved with the Ermington and Rydalmere Senior Citizens groups and occasionally joins them in a game of bingo.

A devoted Rugby league fan, John is the patron of the Ermington Sport and Recreational Club and works closely with the Dundas Neighbourhood Centre and Ermington Youth. 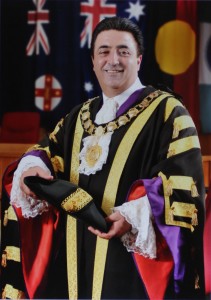