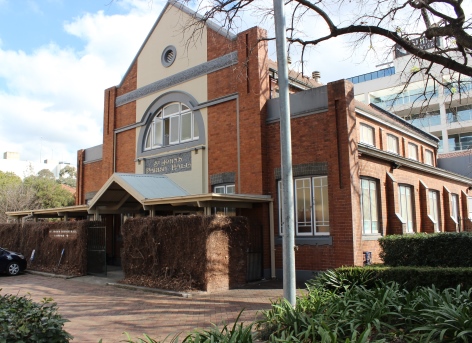 Located behind St. John’s Church in Parramatta is the Parish Hall.  Built in a very different style and much later than the Church it was completed in 1911.  Records from St. John’s Cathedral Archives indicate that initial discussions about a new hall were first raised in 1909 but didn’t proceed due to a lack of funding.  In 1910, a local builder named Mr Noller presented building plans to the Diocese for approval.[1]

The new Parish Hall was officially opened in May 1911 when the Archbishop of Sydney, Dr Wright travelled to Parramatta for the official opening.  Many people attended, including the Ven. Archdeacon Gunther who was a previous pastor of the parish, Mr T R Moxham, previous Mayor and Alderman of Parramatta Council, Mayor of Parramatta Council, Mr W F Mayo, and a number of visiting clergymen.[2]

Following tea a public meeting was held and congratulatory speeches made, acknowledging the work done towards having the hall built and a keen awareness of the importance of teaching children in the community.   “The Church was learning from the secular education bodies the necessity of being up-to-date in the matter of juvenile instruction…Classrooms were a step in the right direction…It was the great purpose of the Sunday school to implant high ideals and noble aspirations.”[3]

In 1813, the first Sunday school in Parramatta was organised by Thomas Hassall (later the Reverend), in his home on the corner of Charles and George Streets.  Later, these lessons were conducted in St. John’s Church and in an old school house on the corner of Church and Macquarie Streets, where the old Murray Bros building still stands.  The lessons were then held in an old weatherboard building that used to be behind where the hall stands now.   In 1913, a plaque was laid in St.John’s Parish Hall commemorating the centenary of the first Sunday school held in Australia.[4]

Parish archive papers describe the hall as “…a substantial brick building, with slate roof.  It is well lighted and ventilated, and is fitted up with all modern improvements.  The special feature is its division into 18 classrooms which surround the main portion of the hall.  When full, it is capable of seating some 600 persons.  There is a gallery over the main entrance which will be used to seat the choir.[5]

Over the years there have been various modifications including kitchen additions in 1938, and alterations designed by Martin and King Architects, Sydney in 1954 and 1967.  It is possible that the 1967 alterations included panelling at the front which has been recently removed to reveal the original façade.[6] 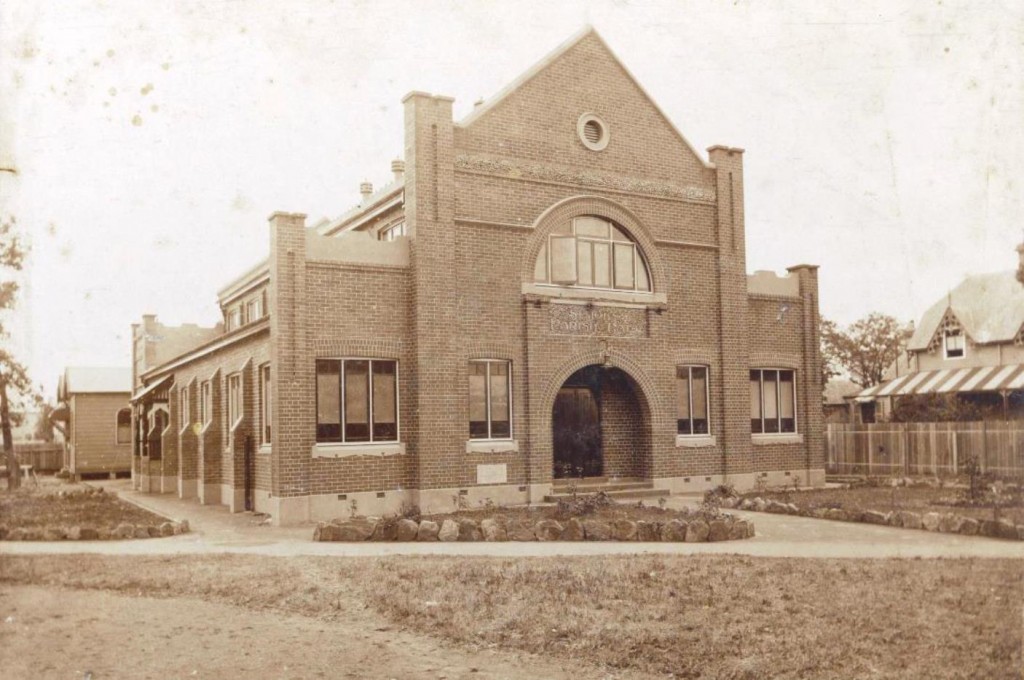 In 1964, the Church newspaper reported on the new building works:

The work at St John’s is to be developed further this month by the opening of a Church office and the appointment of Miss Eunice Olsson as the first full-time Office Secretary.  The office will be located in the front room of the Parish Hall.  A new entrance has been made through the side wall of the front porch, thus giving direct access to the Office and eliminating the need to enter through the Parish Hall itself.

A number of alterations have been necessary in order to set up the Office adequately.  For a small outlay a pleasing result has been achieved and the new arrangement should serve the purpose well.

For a long time it has been realised that the work of our Church has suffered due to there being no direct point of contact with the public at the site of the Church.  The opening of the office will facilitate contact by inquirers with the clergy and other office bearers and will enable information and assistance to be given readily to those who come to the church for this purpose.  It will also provide necessary relief for much of the clerical work and will free the office bearers to attend to other matters which in the past have had to be neglected.  The office will commence operations on Monday, 3rd February, and will remain open each day – Monday to Friday – from 9am to 5pm (except in the lunch hour – 1 to 2pm) and on Saturdays from 9.30am to 12 noon.[7]

On Tuesday evening, at St. John’s Parish Hall, Parramatta, there was a fair attendance of those connected with the old church, at a social gathering tendered to Mrs Tunks, late of Macquarie Street, Parramatta, and widow of the late Mr WH Tunks, of the Lands Department.   Mrs Tunks, as many of our readers know, was in her young days Miss C. Harper, daughter of the then Mayor of Parramatta, (Alderman Richard Harper, J.P.), and sister of Mr. John Harper, afterwards Chief Commissioner of Railways in New South Wales, and Miss M. Harper, the most successful C.M.A. organiser. For 50 years or more she was connected with St. John’s, as a scholar, and then a teacher in the Sunday school, and afterwards as one in the forefront of the earnest workers connected with the different agencies   of the parish.  At missionary efforts, jumble sales, tea meetings, Miss C. Harper, and, as she was later, Mrs Tunks, was ever a figure prominent among the busy ones.  Right well she played her part for many years; and then, as the time came for her and others of her immediate time to relax general efforts here because of the vicissitudes of life or by reason of family removal to other spheres of usefulness, younger ones of the congregation moved up to take the places being vacated. The Rev. S.M. Johnstone, Rector of St. John’s, occupied the chair at the meeting on Tuesday, and in an address he gave, as also in short speeches from ex-Mayor W P Noller and Mr P Morgan – two members of the old experienced and ardent band of parish workers – references was made in suitable terms to the value of Mrs Tunks’ past services to the cause of religion and character, as represented by St. John’s.  Presentations were made to Mrs Tunks – cheques and a Schofield Bible and a ladies’ bag.

The presents came from the Mothers’ Union of St. John’s and that of St. Paul’s, Harris Park, Mission Church, and from the congregation generally of the mother church of the parish.  Mr Eric Tunks replied on behalf of his mother.  His brother is away at the front, doing battle for the Empire.  He thanked all for their expressions of kindness and remembrance, and assured them that the happy and interesting days spent at St. John’s would never be forgotten by his mother and the family.  The proceedings were brought to a close with the National Anthem sung after Mrs Tunks had had an opportunity of personally saying ‘Au revoir’ to those of her old Parramatta friends present.[8]

When the community celebrated its two hundred year anniversary in 2002, many social and community groups were being conducted in the hall, such as Playtime, Kids Plus and U-turn, Sunday School, Bible Study, Prayer, Open door group, The friendship group, The Rector’s Annual retreat, In-betweeners group, Cathedral guides, and Pastoral care.[9]

[1] Pearce, J, Archivist,  St. John’s Cathedral based on material from the 1911 Parish papers

[6] Pearce, Jenny, Archivist, St.John’s Cathedral based on material from the 1911 Parish papers