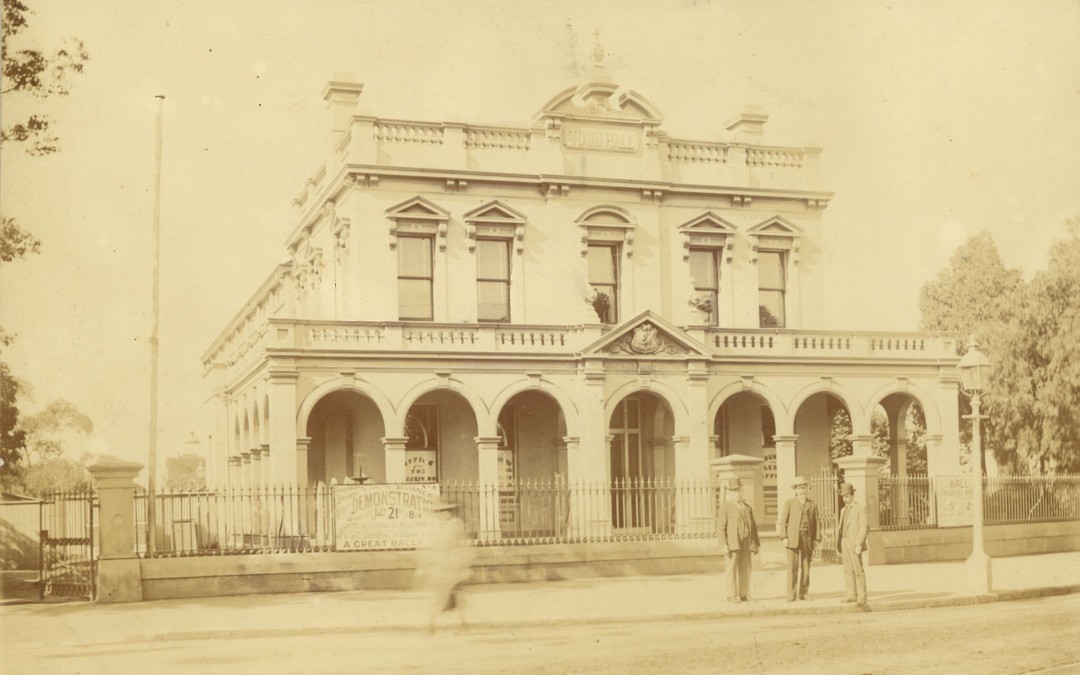 Parramatta Borough Council was incorporated in 1861 with John Williams appointed the first Mayor. One of the first tasks of the newly formed Council was to find premises for weekly meetings. There did not exist in the town a building suitable for holding public meetings and even to stage performances.

The newly formed council decided to use the Court House temporarily until more suitable premises could be found. In April 1862 Elder’s House, located on the south east corner of George and Marsden Streets, where the Woolpack Hotel stands, was rented as Council offices for ten years. 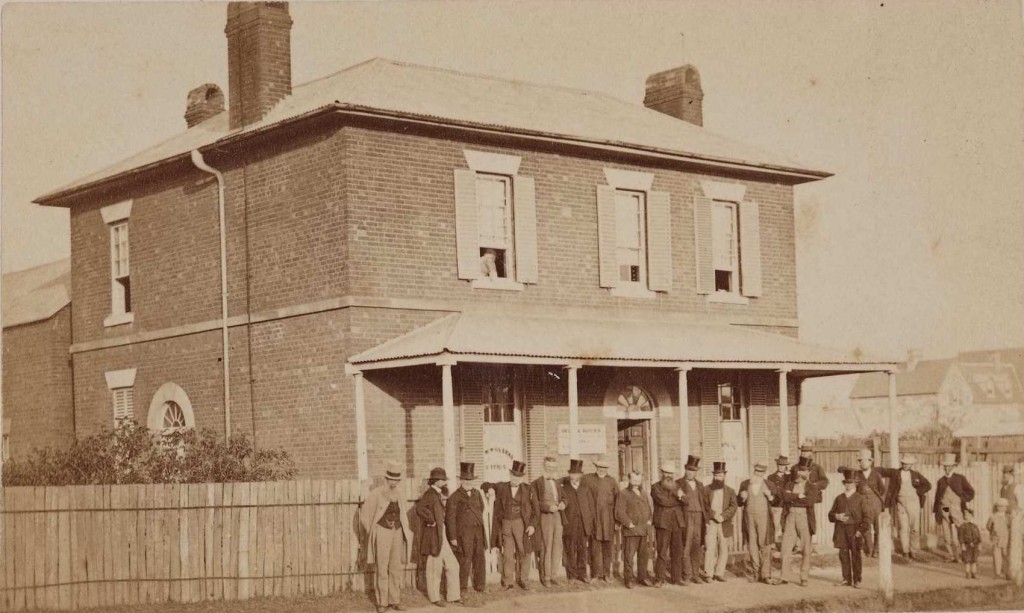 By 1878 Council was occupying a rented room in Church Street. Pressure was mounting on Council to build Council Chambers and a Town Hall. The population of Parramatta was over 7000 and there were still no building suitable for holding performances or meetings. Mayor C. J. Byrnes reported to New South Wales Parliament that Parramatta needed  Council offices and town hall for Parramatta. The preferred location was a site for the originally marked out by Governor Phillip in his 1792 plan for Parramatta. This location was also land Macquarie reserved in 1812 for the town market.  The market opened in 1813 and because of its central location was used for other public activities such as cattle sales and agricultural shows.[1]

The site is also well known for the annual feast for Aboriginals, started by Governor Macquarie in December 1816. These feasts were held in December or January until 1833 when it was moved to May and combined with the distribution of blankets. The event seemed to have ended sometime in the mid 1830s. [2]

The Parramatta Town Hall Act of 1879 was passed which allowed the council to take over the market site to build a Town Hall.[3] Council at this point could not afford to build both the Town Hall and Chambers and chose to proceed with the Chambers building first. Tenders were called for the building in 1879. The Sydney architectural firm of Mansfield Brothers were chosen for the project. The builders were the local business Hart and Lavors.[4] Mayor C. J. Byrnes had the honour of laying the foundation stone on 19th November 1879. The building was formally declared open on 19 August 1881. [5] 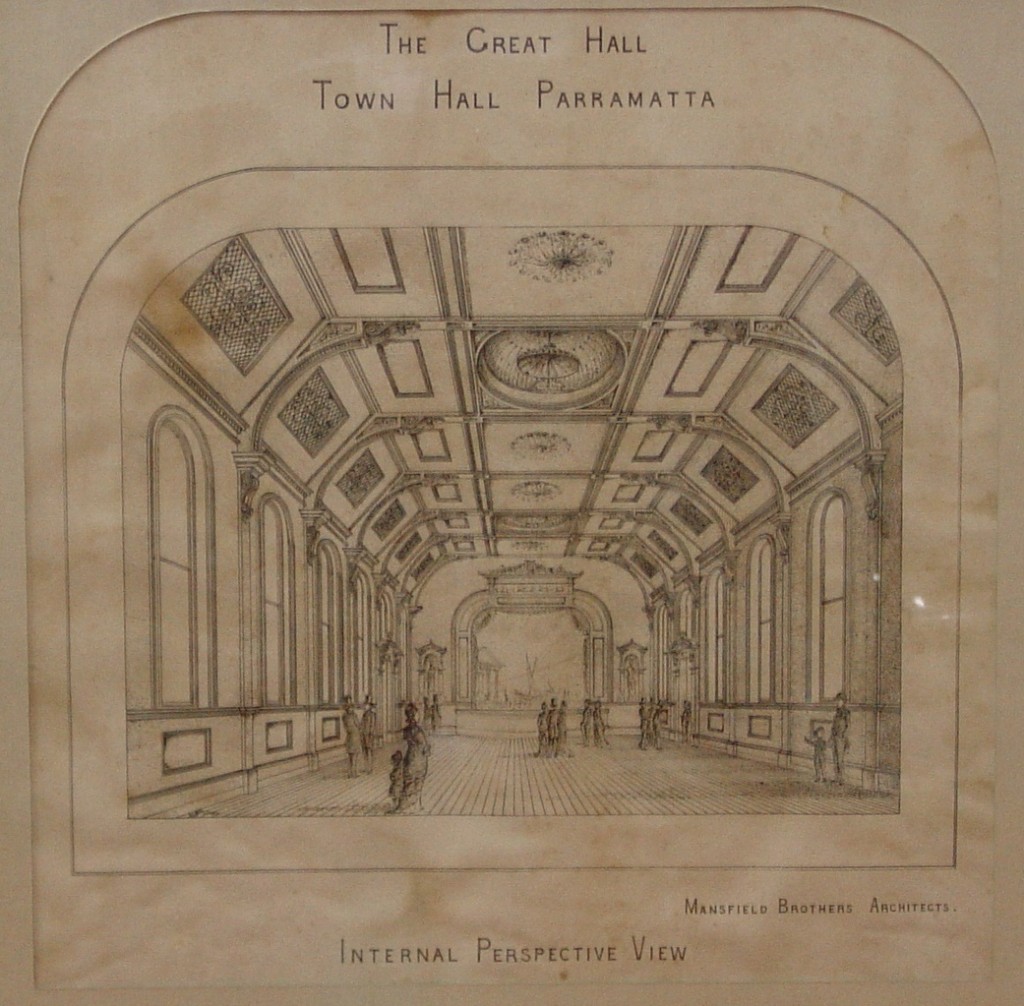 Fuller’s County of Cumberland Year Book of 1882 provides a description of the Council Chambers:

They were designed by Messrs.  Mansfield architects, and built by Messrs.  Hart and Lavors.  The style is a kind of Palladian.  The building consists of two stories. On the bottom storey are the Council Clerk’s office, strong-room, free public library office of Inspector of nuisances and Overseer’s office.  Upstairs there are the Council room, committee room Mayor’s office, and refreshment room.  Each story is very lofty, and the Council room is ornamented with a marble mantelpiece, a splendid chandelier, near pillars, etc.  A verandah surrounds the building and in the left wing is the office of the Inspector of Nuisances.  At the rear is the Council Clerk’s residence, a commodious building well fitted up.  it is intended to enclose the Council Chambers in about half an acre of land, on which will be planted trees, shrubs, flowering plants, etc.  The arms of the Council are blazoned on a shield in fight relief over the porch.[6]

One year later, on the 13 September 1882, Mayor Joseph Booth laid the foundation stone for the Town Hall. “After the stone had been laid, the company adjourned to the Council Chambers, where the health of the mayor and aldermen was drunk with enthusiasm.”[7] The builders for the Town Hall were Herbert Coates of Parramatta and it was was officially opened on 29 August 1883 with the first performance organised by the Parramatta Glee Club. The programme consisted, appropriately, of Haydn’s oratorio, ‘The Creation”. [8]

The approach of Parramatta Municipal Council’s 50th Anniversary in 1911, Alderman Hill suggested a museum be built to commemorate the Council’s Jubilee . The idea of some sort of commemorative hall was well received by the Jubilee Organising Committee and plans were made to build a museum next to the Town Hall. The foundation stone for what was to become know as the Jubilee Hall was laid on 27 November 1911 by a voiceless Mayor Jago, who signaled with three taps of the trowel on the foundation stone that the stone was well and truly set. [9] 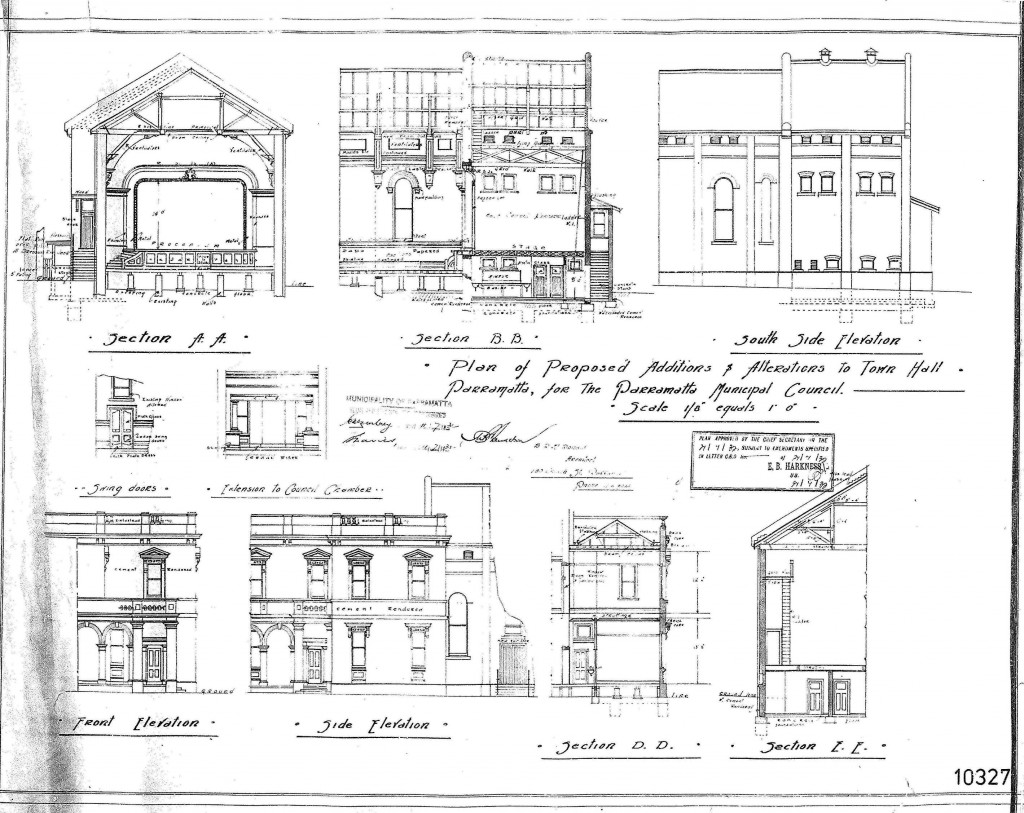 Plans for alterations to the Town Hall 1932. Parramatta Council Plans

However, what was yet to be set was the intended use of the hall and its exact position. Considerable debate raged among Alderman with letters to the Cumberland Argus debating whether the ratepayers of Parramatta should bear the cost of a museum or if there was in fact enough material to place in museum. Eventually, instead of a museum a “supper hall” was completed in July 1913 on the northern side of Parramatta Town Hall, which Council felt would best serve the interests of the Council and residents.[10]

In 1932 plans were submitted by architect Mr McDonald to extend the Town Hall by about 25 feet by removing the stage and reconstructing it about 25 feet from its original position. The proscenium wall was extended through the main roof.  A new opening between the Town Hall and the Jubilee Hall was made and changes made to the office areas of the council building. [11] 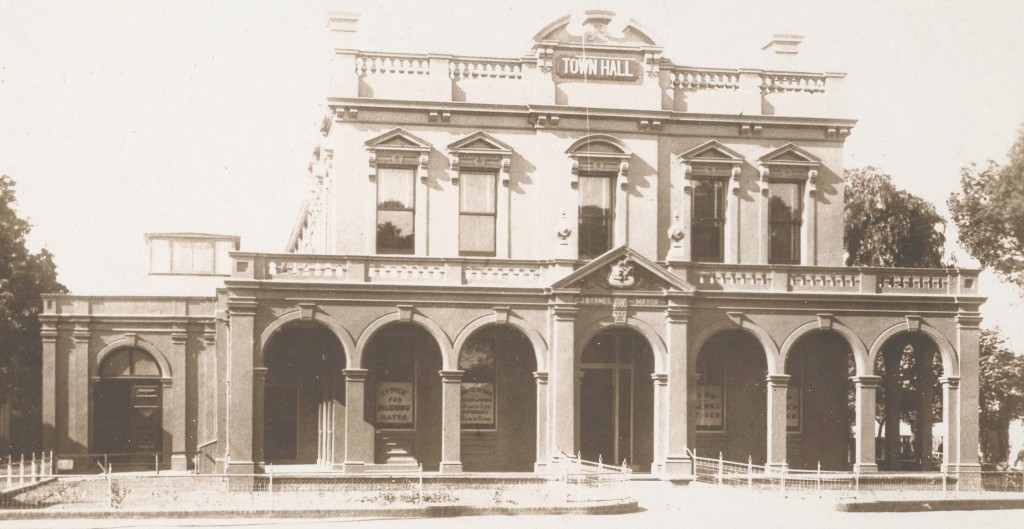 Town Hall with the Jubilee Hall at the left of the photograph. Local Studies Photograph Collection LSP00741

With the rapid growth of Parramatta post World War Two and its amalgamation of the Councils Granville, Dundas, Ermington and Rydalmere in 1948 the Parramatta Council found itself in need of more offices. The Jubilee Hall had to be adapted for offices while plans were made for a new Council building to be erected.

A new four storey building was built on the site of the Town Clerk’s home located directly behind the Town Hall. The building was designed by Buckland and Druce and opened in 1958 and is still used for Council Meetings.

3.   The Parramatta Town Hall Act 1879. (An Act to authorize the erection of a Town Hall and other buildings on land granted as a site for a Market in the Town of Parramatta and for other purposes therein mentioned. [4th February, 1879.] avaiable at http://www.austlii.edu.au/au/legis/nsw/num_act/pthao1878np304.pdf