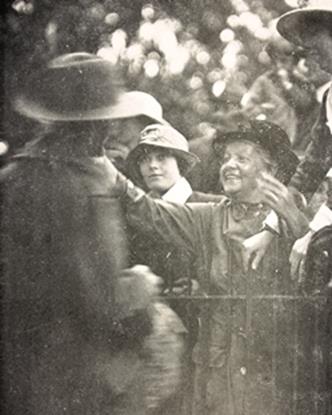 A less well-known community organisation that developed during World War One was the Soldiers Wives and Mothers’ Centre, which as the name suggests, looked after the wives and mothers of soldiers who have gone to the front.  In Parramatta these meetings were held monthly at the Town Hall.

The original idea of some kind of support for wives and mothers was thought of by Dr.Mary Booth of Sydney, and Miss Fairclough, Mrs Thomas and Mrs Griffin, of Parramatta. They usually met for afternoon tea and a chance for women to bring their children and meet with others in a similar situation to discuss the latest news and offer help and support to each other.  Often there was a musical programme and some lectures on cooking and at other times the group organised for visiting guests as mentioned in the report below.

“Lady Helen Munro Ferguson came up to one of these meetings, also Lady Davidson attended two of the garden parties given by Mrs Cotter Williamson in the lovely Hospital gardens.  Mrs Moxham gave another garden party.  All were largely attended and enjoyed.  Two Christmas trees were given by the committee and working members of the Centre, who provided a lavish tea and plenty of presents for the crowds of happy children.  Mrs Williamson was the President, Mrs Smythe and Mrs Griffin, Vice-Presidents, Mrs Dunn and Mrs Whiting, Secretaries; and Mrs W Matthews, Treasurer. The object was to visit the lonely mothers and wives in their homes, as well as entertain them and brighten their dreary, anxious lives.”

The next article from the The Cumberland Argus and Fruitgrowers Advocate indicates the level of community support that the meetings engendered and how they bandied together to help finance the war through the use of war bonds.

“A meeting of the Parramatta Soldiers’ Wives and Mothers Centre executive and workers was held on Monday afternoon in the Jubilee Hall, Parramatta Town Hall.  Mrs W.C.Williamson (President) was in the chair; and among the others present were the hon.secretary (Mrs W.Morphett).  Arrangements were made for the gathering of the series – as held under the auspices of the Centre – on the 29th inst., when Mrs P.S. Waddy will be given an official farewelling before her departure (in June) for her new home in Jerasulem, where, all our readers know, her husband is working now as Canon of the Church of England under the Bishop of Jerusalem.  The hope was expressed by the officers and others taking part in Monday’s meeting of the Centre that the forthcoming function would be made by all a most successful one; and that those wives and mothers and others, who had been subscribing for the purchase of war bonds would make arrangements to bring along their balances, in order that the bonds might be issued.  A fine musical programme was decided upon as one of the features of the final gathering of the Centre.” 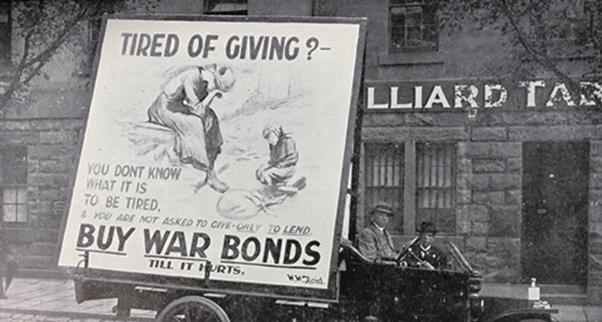 A poster used in Melbourne during the war depicting a French or Belgian woman sitting amid the ruins of their house. Such posters made a strong appeal both in recruiting and loan campaigns, and give some indication of the motives which maintained the Australian war effort. (Source Charles Bean, Vol 12 Lent by the Commonwealth Treasury Department, Australian War Memorial Collection H2366)

After the war, a memorial was erected in Woollomoloo dedicated to the place of farewell for World War One soldiers.  It was established by the Soldiers Wives and Mothers Centre and dedicated by the Governor General of Australia on ANZAC Day in 1922. 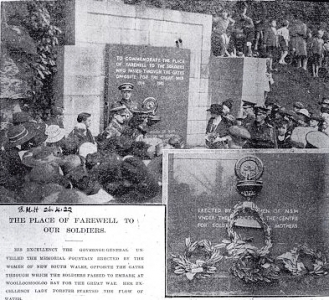 The memorial is a sandstone structure with enclosed circular plaque depicting a sprig of rosemary, an eternal flame and a drinking fountain.  The inscription reads…To commemorate the place of farewell to the soldiers who passed through the gates opposite for the Great War 1914 1919.  Erected by the women of NSW under the auspices of the Centre for Soldiers Wives and Mothers.  It was designed by architects H.Budden and C.Greenwell.  In 1988, the memorial was moved to another location 30m east of the Sydney Fleet Base in Woollomoloo.

Featured Image A soldier finds his mother among the waiting crowd. (Source: Charles Bean, Vol 12.  Photo by The Sydney Mail)