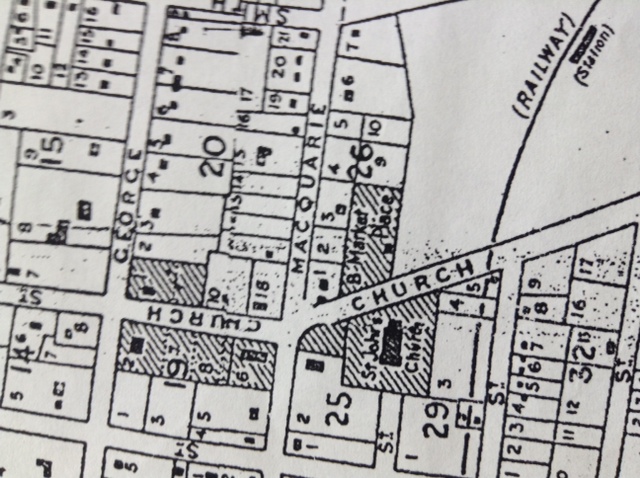 Parramatta’s Town Hall site was established when Governor Phillip set aside the land in his plan for Parramatta, thus making it the oldest town hall site in Australia.  Foundations were laid for a Town Hall in 1792, [presumably at the original site next to the Parramatta River and Church Street] but other building projects received priority. Construction for the Parramatta Town Hall was initiated over two stages, from 1879 to 1883.

Governor Macquarie used the site as a Market Place by 1812. The market sold all the produce of the district, and animals for sale were penned up there. The list of public works undertaken during administration of Governor Macquarie includes “A public Market Place, with store for Grain and Pens for Cattle, enclosed with a high Paling in the centre of the Town, consisting of three acres of ground” (1). This site was used consistently as a market place until 1878 when the site began to be prepared for the construction of the Town Hall.

This site was also where the Annual Meeting of the Aboriginal Tribes at Parramatta was held, which Governor Macquarie began in in 1816 and continued to 1833.

The Parramatta Town Hall site has never been in private hands. The site was Crown land with multiple leases until it was transferred to the Council of the Municipality of Parramatta on the 6 December 1866 with the passing of the Parramatta Market Act. The act cites that:

all land estate and all personal property of whatsoever kind belonging thereto or usually held  and enjoyed therewith or held in trust therefor or for the purposes thereof are hereby transferred to and vested in the Council of the Municipality of Parramatta in trust for and subject to the several purposes and provisions of the Municipalities Act of 1858. (2)

In 1809, two of the earliest lessees were Phillip Schaffer and Bryan Riley, who were granted part leases on this site.

It is noted in the NSW Government Gazette, that the Market Place allotment was leased by Sir Thomas Brisbane for 21 years from the 30 June 1823 to William Batman, the father of John Batman the founder of Melbourne. On the 8 March 1839, with William Batman now deceased, it is noted that this lease had been sold to a William Howard Bennett of Parramatta, with William Batman’s widow requesting the “Deed in favour of claimant, who will have to pay 21 years Quit Rent” (3)

In 1850, in a survey by Burrows, the buildings on the Market Place site are shown including the public pound which was there until 1872, when it was moved to the north side of the Parramatta River. (4) The survey also includes the names of the Market Commissioners David Forbes, Hugh Taylor, James McRoberts, Charles Blakefield, James Urquhart and James Edrop. These six Commissioners had been elected in July 1849 by the local population to manage and organize the markets. Commissioners managed the markets from 1841 to 1862. From 1862 – once Parramatta had become incorporated as a Municipal Council – until 1879, the council managed the Market Place site. 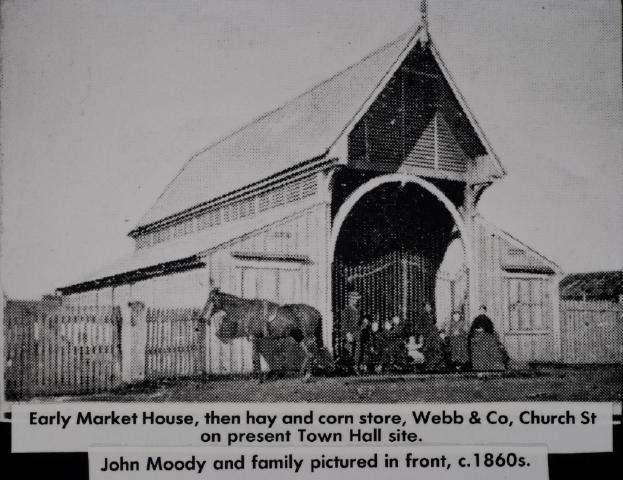 In this photograph we can see John Moody and his family in front of the market gates of the early Market House building erected in 1851 by the lessee at that time, Standish Drew. John Moody’s responsibilities included managing the cattle on the Market Place site and the proceeds of any sales. Behind this building there were fenced paddocks used for frequent livestock sales that included horses. The building itself was fitted with stalls. This market building was later sold and moved to Western Road as a produce store for the local company Webb and Co.

In 1879 the Market Place site was transferred to the Municipal Council of Parramatta for a Town Hall. The Parramatta Town Hall Act, which was passed on the 4 February 1879, authorized the erection of a Town Hall on the site, and the authority to pull down any buildings erected on the site. (5)

In minutes of evidence given before a select committee from October 1878, it was mentioned that the market site had buildings worth about £3000, and the land was valued at approximately £1500-£2000. (6)

The featured image at the beginning of this post – Plan of Parramatta – showing urban settlement with allotments in 1822. Parramatta Heritage Centre Local Studies library map collection