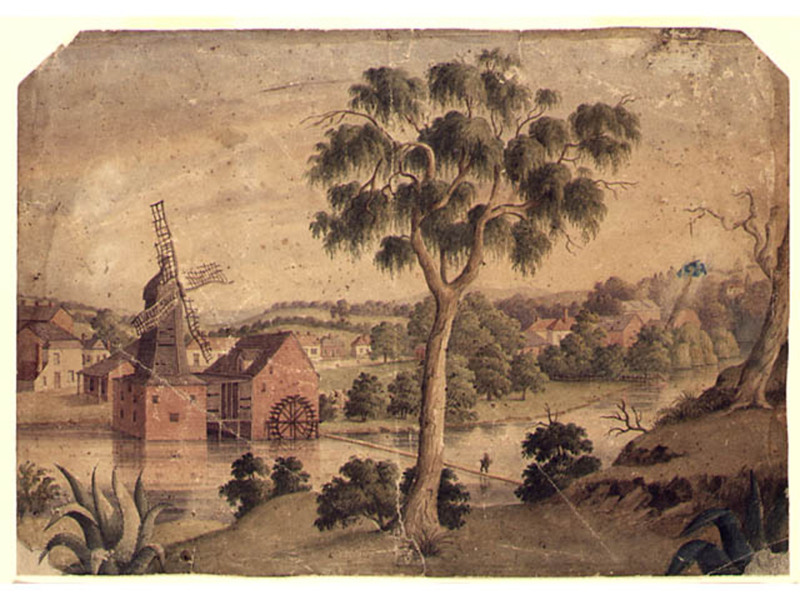 In 1828 George Howell and his son ‘George Jnr.’ began work on what was to become one of the most distinctive landmarks for visitors coming to Parramatta by river. Howell was a 50 year old ex-convict who had settled down on 80 acres of land at Yarramundi, Richmond, but saw the need for a large mill to grind the growing number of crops being produced in the area. While there were a number of wind, water and steam mills dotted across the Sydney landscape Parramatta was still without a proper mill close to town and much of the grinding was still being done by small hand mills. Howell’s new mill was on a scale larger than any previously built in the area being 100 feet tall and consisting of six separate floors.

‘Howell’s Mill’ was situated on the banks of the river on the southern side of the Gaswork’s Bridge and the site was chosen to ensure there was a continuous  flow of water for the grinding as further up the river flow could be reduced to a trickle depending on the time of the year. To accomplish this Howell also needed to construct a dam across the river to build up the reservoir of water. The construction was not without problems, firstly there was the £3000 price tag, but the biggest challenge for the Howells was their very public battle with John Raine who lived on a property on the other side of the river.

This property was part of a large plot of land owned by the Reverend Samuel Marsden. Locally known as ‘Newlands’ or ‘Rangihou’ it was at this time was leased by Raine, who had built Parramatta’s first steam mill and managed the ‘Darling Mill’ in North Parramatta. Concerned that the dam had become a thoroughfare for trespassers Raine took it upon himself to dig up the dam where it connected with his side of the riverbank. This resulted in a series of clashes between Raine’s men who were bent on removing the dam and Howell’s friends who were maintaining it. The ensuing battles were covered in detail by the local newspapers and garnered the Howells the support of their next door neighbour, John Macarthur, who not only actively supported the construction of the dam but ruled as magistrate when the case ended up in the local court.

By April 1828 the dispute had turned ugly with supporters and employees from both sides engaged in a ‘riot’ which led to John Raine being put on trial for the assault of Robert Parnel. He was later found not guilty.

The mill once completed proved to be both a landmark and major asset when it came to grinding the local grains. Clearly the mill was a good business for Howell but ten years later two fateful incidents would mar its success. The first occurred in 1837 when John Richard Barrett (architect and builder), a cousin of the Howell’s, was killed in a fatal accident at the mill. George decided to move out of the mill which he was using as his residence and move to another mill he owned near the Female Factory. As fate would have it, in March 1838, soon after the first incident George Jnr. was killed when a large plank of wood being used in the renovations fell on him and one year later George Snr died. The mill passed on to one of his sons, Thomas, but George Jnr.’s wife Elizabeth continued to manage the mill very successfully after his death. After Elizabeth died in 1866 the mill gradually fell into disrepair and was abandoned in 1868.

George Senior died in 1839 but their descendants continued to live in Parramatta for many more years and are recognised as one of the pioneer families of the region.

[Howell’s Mill, Parramatta – watercolour drawing] State Library of NSW Pictures Collection. http://acmssearch.sl.nsw.gov.au/search/itemDetailPaged.cgi?itemID=25717
The Monitor, 21 June, 1828
Funeral of the late George Howell Jun., The Sydney Monitor, 7 March, 1838
According to Howells’ grandson Vincent George Howell also had a number of convicts assigned to him to help work the land. One of these went on to become the bushranger John Donohue. The same source also states that the mill was destroyed by fire. Windsor and Richmond Gazette, 6 March, 1897, p.1
This article also claims that the Mrs Payten, wife of Nat Payten a former licensee of the Woolpack Hotel, was convinced to dig up her vegetable patch at the back of the hotel to make what they claim was the first bowling green in Australia. The Howell’s of Howell’s Mill, The Cumberland and Fruitgrowers Advocate, 26 October, 1938