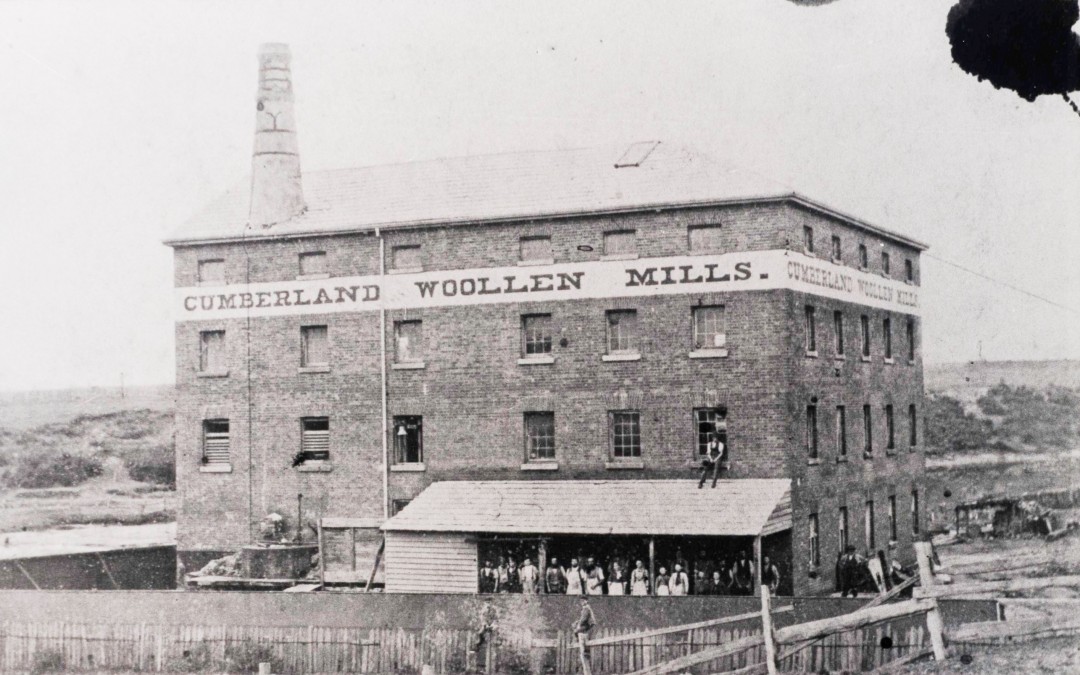 At the foot of Smith Street (#40 Smith Street) on the eastern side, up from the riverbank, Henry Harvey, a baker, built a steam operated mill between 1840 and 1841 and commenced producing flour.[1]

Substantially built, the building was originally four stories in height but was reduced to two stories at some later date. The brick walls, which were painted, were reported as having been over twelve inches thick indicating that they were built in English or Flemish bond, both styles being common at the time. Deep in plan with a hipped roof (later of corrugated iron), the building gave the appearance that it was solidly built. Window openings were considered small in proportion to the wall area. The building was known in turn as Harvey’s Mill, Dare’s Mill, French’s Mill, The Cumberland Fruit Preserving Company’s Works and finally The Parramatta Ice Works.[2]

The mill stood originally on land leased to John Fullagher for 21 years in June 1823. Like most leases at the time, Fullagher had the right to convert it to a grant by erecting a building on it to the value of £1000 or more or by purchase for the payment of 21 years quit rent at a reasonably determined price. Evidently these conditions were not fulfilled as a grant of the allotment was made to Harvey on 26 October 1840.[3]  The mill is shown on Brownrigg’s Survey of 1844-45.

Harvey (?1800-1874) was originally from the Isle of Wight and a baker by trade. He was transported for seven years, arriving on the Malabar in 1819; he was assigned to George Palmer at Pemberton Grange. On receiving his ticket of leave in 1825,  he built a shop and house in Church Street, North Parramatta and alongside it a bakery. Determined to become a man of property, he erected a ‘neat row of houses’ on land in George Street, acquired land in Smith Street and built the steam mill to process his own flour. In the late thirties, he purchased a number of lots in the Marsden Estate, including the lot on which Newlands stood.

Having extended his financial borrowing’s too far in the 1840’s depression he was saved by his friends Houison and Payten who loaned him money by way of a mortgage over his properties. He successfully weathered the storm and continued dealing in real estate, particularly town allotments. He purchased MacDonald’s farm in Ermington, eventually selling it to William Payten, his son-in-law. He owned Pemberton Grange also but finally settled at  Morton House in East Parramatta for his remaining years.

Having no sons, he invited his nephew Henry Granger, also a baker, to operate the bakery business, eventually selling the property to him; the bakery was sold by Granger’s descendants in the 1960’s to Fielder’s Flour and demolished in 1969.[1]. Harvey died in 1874, having become a substantial citizen of Parramatta, despite his convict past.

As indicated by the changes of name, the mill served a number of industrial purposes over its span of 130 years. Perhaps its most interesting phase was when it was bought in 1869 by John French, of Lithgow as a site to manufacture tweed cloth. Alfred, a son, assisted his father but branched out to manufacture tweed at the Cumberland Mill in 1870, having bought the property from Harvey. On the death of his father in 1876, Alfred carried on operations at both mills. The Cumberland Mill, an established landmark at the foot of Smith Street by the river, was demolished in 1974.[2]

Behind this mill and along the riverbank was a quarry, one of the earliest in Parramatta. It was in this sandstone quarry in which Rev Richard Johnston was reported to have held the first church services at Rose Hill.