He was called the “Prince of the Parramatta River”. Well known by many of the residents who lived along the Parramatta River,Mance had built a reputation as a cheerful, courteous and obliging man and had spent 74 years in Parramatta, fifty of those years working on the Parramatta River. Henry (or Harry) Mance, born 1837 in Newcastle, came with his parents to Parramatta aged three.[i]  He remained a resident of Parramatta until his death in 1913.

Perhaps no man understood the Parramatta River better than Mance. He began working with Parramatta ferries around 1856 just after the Sydney to Parramatta railway line was opened, and the ferry was a steam powered paddle boat. The ferry ride to Parramatta at that time was a long and tedious journey with passengers having to pack lunch for the journey.  As well as being well know by communities along the river he was also familiar to the many rowers who raced on its waters. Captain Mance saw the first boat race on the river in 1858 when R. A. W. Green beat the great English oarsman James Candlish. Mance could recall many of the hundreds of amateur and professional boat races on the river and often his steamer, in support, would follow behind the races.[ii]

As a ferry captain he provided many years of incident free and reliable travel for his passengers. He did meet with a serious accident three years before his retirement in February 1903 when bringing his steamer up to the Hunter’s Hill wharf he somehow, with his hand on the wheel, jammed his hand against a bolt and with the weight of the steamer swinging in the tide, crushed his hand, with the result that the hand and wrist were seriously damaged. Being at Hunter’s Hill Wharf he was not far from the residence of Dr. Lloyd who carried out an extensive operation to repair the captain’s hand.[iii]

One of the most tragic events that Captain Mance had experienced as a ferry captain was the 1857 sinking of the Dunbar at Watson’s Bay, in which 121 lives were lost. He was ordered by the government to take the ferry, Black Swan, to search for survivors. The Captain spoke of the awful site of dismembered bodies being washed up against the cliffs of the Gap, a site that would live forever in his memory.[iv] 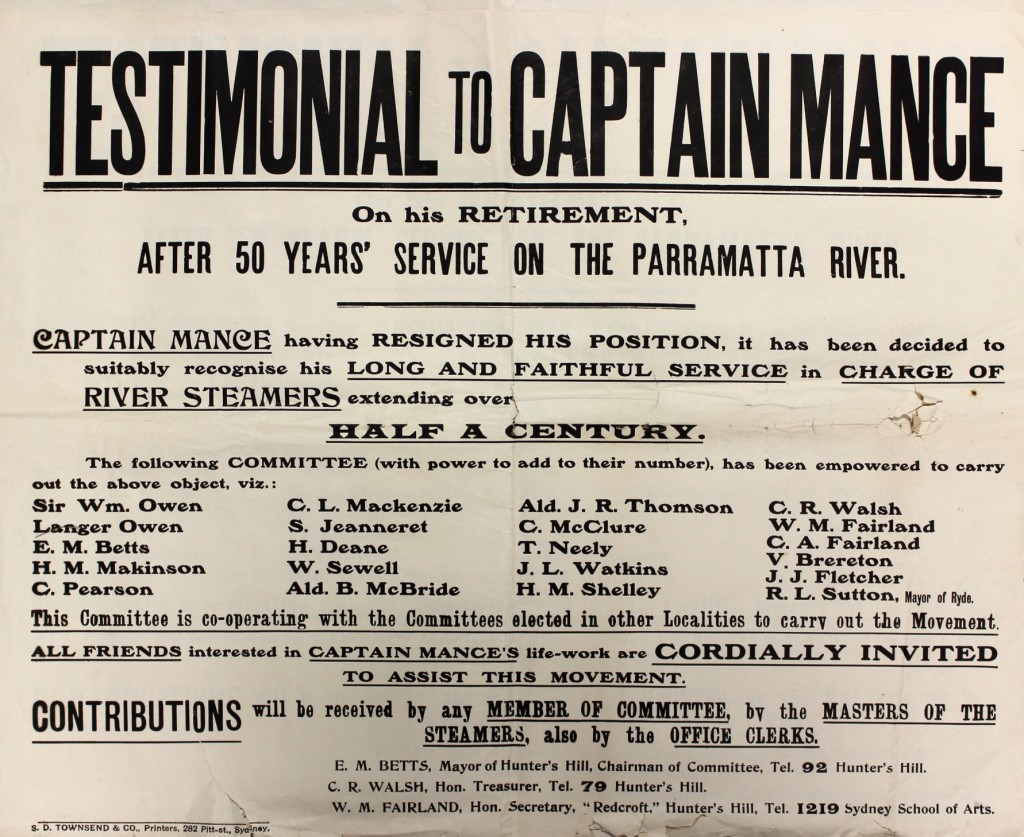 On the afternoon of the 20th October 1906, employees of the Sydney Ferries, Ltd. (Parramatta River service) gathered at the White Horse Hotel, Parramatta for a surprise presentation party for Captain Mance. After introductory speeches Captain Mance was presented with an illuminated and framed address that read as follows: —

To Captain Henry Mance. Dear Sir, — We, the employees of ‘ The Parramatta River Ferry Service, on the occasion of your retirement  take the opportunity of testifying to your many valuable qualities. During your 50 years’ connection with the Parramatta River ferry service, by your genial courtesy, honesty of purpose, and devotion to duty, you have won the respect and admiration of all with whom; you have been associated. Hoping that your future life will be one of happiness and prosperity, and that you will livelong to enjoy the rest you so richly deserve….[v]

Mr. Walshaw referred to Captain Mance’s long and honorable service, and the affection all the employees had for him. He had heard, not only from the men who had worked with him from their boyhood, but passengers and the general public some of whom had known him for 30 and 40 years, speak in the highest terms of praise in regard to the Captain…”

So popular and respected was Captain Mance a meeting was convened by the Mayor of Hunter’s Hill, E. M. Betts, calling on residents who travelled by Parramatta River Steamers to consider the recognition of the “valued and efficient services rendered for 50 years by Captain Mance…”  As a result of this meeting other committees were formed including one by Parramatta Council, formed on the 15th October 1906, to raise funds and prepare for an official retirement celebration for the “Old Captain.” On 17 December 1906 at Hunter’s Hill Town Hall, a presentation  to Captain H Mance, in recognition of his 50 years of service on the Parramatta River steamers was made. 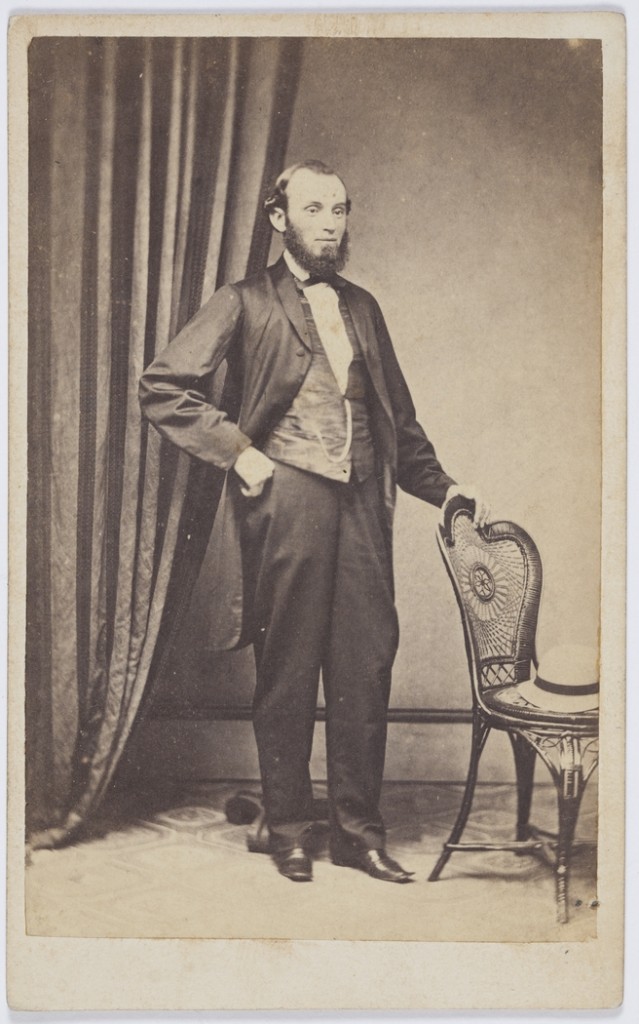