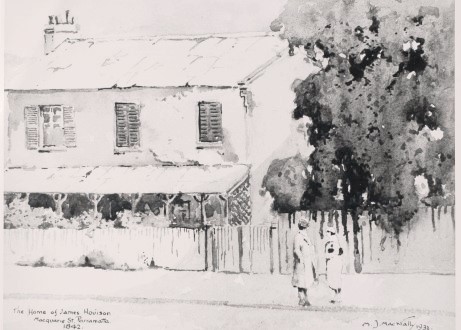 The local architect James Houison erected his shop and dwelling on Lot 1 on the south eastern corner of Lennox Bridge, Church Street. Called the Bond House it was erected in 1864 and joined a number of other shops and commercial buildings being built along the Street.[1]

The Bond House stood against the abutment of the bridge and the footpath and was built of ashlar sandstone, the walls with the exception of the ground floor were plastered. Three stories high, the middle story was at street level. There were two large dormers in the roof storey, one facing east, the other west to Church Street. Sandstone chimneys stood centrally above the apex of each gable; the chimney tops were plain with a single stone string course below the top. At the north and south gable ends were small two paned casement windows. At the footpath level a door and two large windows were symmetrically placed, both covered with heavy shutters. In later years one of the windows was bricked up whilst the other was covered by a huge bookcase.[2]

The windows on the first storey were twelve paned sashes. The whole appearance of the house from the river was solid, whilst from the street front it was iceberg like-one did not realise how much building was below the street surface. Entry to the building in later years was from a side door at the end of a  lane on the southern side at the head of which was a gas lamp standard.[3]

Internally, plans show cellars at the ground level, shop at street level and living area above them. Each level was joined by steep stone stairs. In later years, the house was used for domestic purposes only and in its final years as a dwelling and accountant’s offices by Keith Houison. A glass verandah was erected on the middle level, facing the river by Keith Houison and beneath it were erected offices for his accountancy practice. The building was occupied by James Houison’s fourth son Alexander (1838-1888). He followed in his father’s vocation becoming a carpenter and is listed later as ‘Foreman of Works’.[4]

In 1864 he married Fanny Eliza Roberts, and they moved into the Bond House. They raised three children, James, Annie and Martha. James married Thyra Solling and they lived in Perth House in George Street, originally built by James Houison for politician George Oakes in the 1840s. Keith Houison, from an early age was a dedicated local historian and collector of historical memorabilia of old Parramatta including early books, maps, photographic glass slides, memorials and remains of early bridges. The collection almost turned the old house into a museum.

He became the Parramatta and District Historical Society’s president, having become a foundation member when it was formed in 1913. Gwenda was the Society’s secretary for many years. Keith became the President of the Royal Australian Historical Society and was a Councillor of the Society of Australian Genealogists. For many years, the old Bond House was the home of the Parramatta Society, some older members of the Society still recall meeting there.

It was a condition of sale of the Bond House that two plaques were displayed in the wall of the David Jones’ building. One described that the store was erected on the site of the old Bond House, for many years the home of the Parramatta and District Historical Society. The other, beneath the original foundation memorial stone of the Macquarie Street Convict Barracks erected by Governor Macquarie in 1820, explained its nature and that it had been presented to the Royal Australian Historical Society when the barracks were demolished.

These may be seen on the river patio of the building James Houison and Nathaniel Payten, his business partner, had a workshop on the first lot on the other side of the Lennox Bridge.[5]

by John McClymont, Parramatta Historian, from the manuscripts donated to the Parramatta Heritage and Visitor Centre, 2014