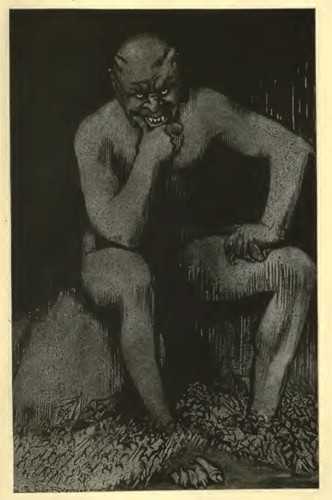 Bernhardi: “War is as divine as eating and drinking”Satan: “Here is a partner for me”[The following is an extended quote by G K Chesterton on Raemaeker’s 1914 cartoon]

The cartoon bears the quotation from Bernhardi “War is as divine as eating and drinking.” Yes; and German war is as divine as German eating and drinking. Anyone who has been in a German restaurant during that mammoth midday meal which generally precedes a sleep akin to a hibernation, will understand how the same strange barbarous solemnity has ruined all the real romance of war.There is no way of conveying the distinction, except by saying vaguely that there is a way of doing things, and that butchering is not necessary to a good army any more than gobbling is necessary to a good dinner.

In our own insular shorthand it can be, insufficiently and narrowly but not unprofitably, expressed by saying that it is possible both to fight and to eat like a gentleman. It is therefore highly significant that Mr. Raemaekers has in this cartoon conceived the devil primarily as a kind of ogre.It is a matter of great interest that this Dutch man of genius, like that other genius whose pencil war has turned into a sword, Will Dyson, lends in the presence of Prussia (which has been for many moderns their first glimpse of absolute or positive evil) to depriving the devil of all that moonshine of dignity which sentimental sceptics have given him. Evil does not mean dignity, any more than it means any other good thing.

The stronger caricaturists have, in a sense, fallen back on the medieval devil; not because he is more mystical, but because he is more material. The face of Raemaekers’ Satan, with its lifted jowl and bared teeth, has less of the half-truth of cynicism than of mere ignominious greed. The armies are spread out for him as a banquet; and the war which he praises, and which was really spread for him in Flanders, is not a Crusade but a cannibal feast. G. K. CHESTERTON