Memories of Parramatta Convicts, Fairs and Races in the 1800s. 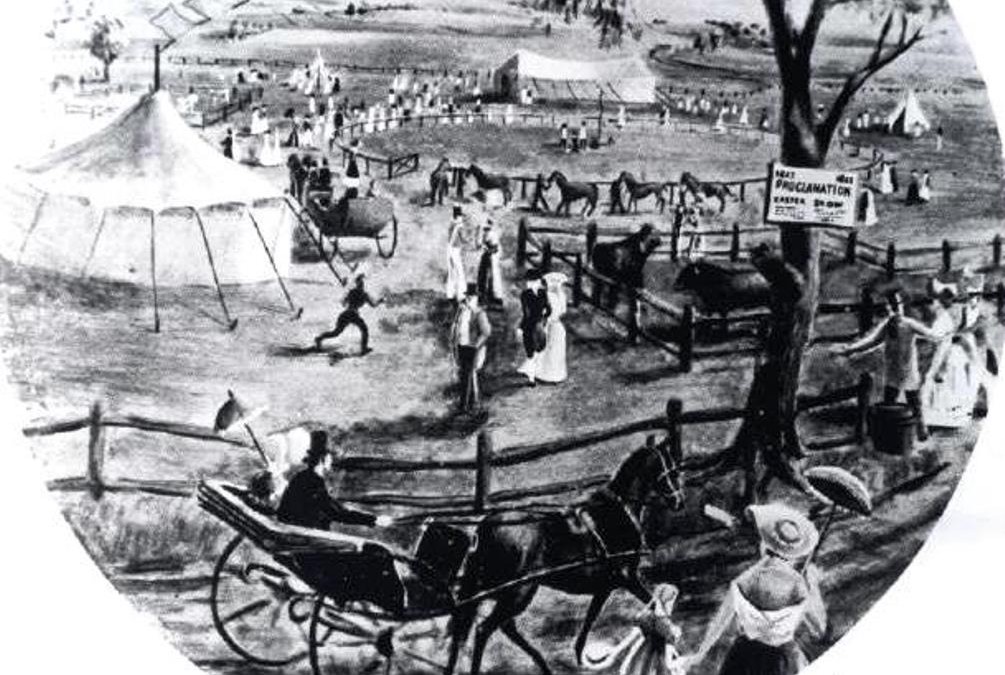 The following excerpt from The Cumberland Argus and Fruitgrowers Advocate provides a lovely personal description of what it was like to live in Parramatta during the years leading up to 1896, when the article was written.  The featured image is an undated sketch from our collection (LSOP854) that depicts the 1823 fair held in Parramatta.  It was a community event equivalent to a modern agricultural show, held on the grounds around the site of the present Town Hall on Church Street.  The first fair held in the colony, it was attended by his excellency the Governor and Mrs Macquarie during their time here.[1]

It will doubtless be pleasingly interesting to the residents and friends of the old historic town – and especially so to the remnants of the old families, who in its early days formed its population, founding names, the descendants of whom are found clinging affectionately to the quiet, old and unpretentious town, and who, with one common feeling, are always glad to get away from a busy, crowded and bustling city, to their quiet, snug and comfortable homes in the old place and its surroundings — to have revived to them old times, old names, people, places, scenes, familiar scenes, reproduced in brighter words and colours, not less acceptable for those additions.

The settlement or, as it was then, and for many years afterwards called, ‘The Camp’ — was named by the Governor, ‘ Rose Hill.’ The first commandant was Major Ross, belonging to a company of Marines who came as military guard in the First Fleet, in January 1788.  Major Ross was also Lieut-Governor of the new colony of New South Wales. He, with a company of about 150 marines, and a number of convicts, formed the first settlement of the place now known as ‘Parramatta’ — an aboriginal name, from ‘Parra,’ (eels), ‘ Matti’ (locality), literally, Eels here.

The town was formed very soon, only a few weeks after Sydney, and was intended to be utilized for growing grain — wheat, maize, oats, etc. — for food for the people of the Colony of New South Wales. The first location was at the place in the Park, now known as Old Government House. The Commandant’s house was put up on that spot, and other buildings for the officers and soldiers, with huts and barracks for the convicts, were erected close by. This spot was called, and for years after was known as ‘The Camp.’  A road running easterly was formed (now George-street), leading to the landing place of the river (now the site of the Benevolent Asylum), ordered to be one mile long and about 200 feet wide.

The convicts- were employed in clearing land near to ‘ The Camp,’ and rendering it fit for growing grain, vegetables, fruit, etc. Those prisoners were difficult to manage and keep in subjection. Many absconded to the bush. At one period a number of convicts who had been sent from Ireland broke into open rebellion, and loudly avowed their determination to free themselves by destroying the whole free people and constituted authorities. Their revolt was a signal failure. Many were shot down, and others executed, by a force organised by Colonel Johnston, of the Marines.

After this, the town began to extend and improve. Streets were formed, residences erected, and every encouragement given by the Government for people to settle in the town and suburbs.  A wooden bridge was put up to cross the river, both sides of which were known by the words, ‘ Over the Water.’  The wooden bridge was washed away by a heavy flood, and the present substantial stone structure, ‘ Lennox Bridge,’ erected, which has ever since, stood its ground. Parramatta, from its salubrity, its quiet, its comfortable hotels, etc., was always an attractive and enjoyable place, one to which the Sydney, Windsor, Liverpool and other people would now and then, on special festive occasions — viz., Parramatta Fair, Tho Blackfellows’ Feast, and other sports— assemble, and have a most enjoyable time for nearly a week.

These improved times commenced in about the year 1820.  During the period preceding this— from 1789 to 1818— Parramatta was under strict and severe Government control and discipline, ruled by a commandant or chief magistrate, who had absolute power in regulating the orders, the laws, and justice.  Many a tale of horror, cruelty, tyranny and brutality has been told, often doubtless exaggerated, but always severe, added to which was the torture of hunger and suffering from scarcity of food and clothing. This particular period is one which might wisely be blotted out from the colony’s history.  After the year 1820, a much brighter state of affairs began to assert itself.  Horseracing and other old English sports were introduced and kept up.  Parramatta Races was a most enjoyable carnival time.  At them assembled the loading families and gentry of the colony — the MacArthur’s, Wentworth’s, Lawson’s, Cox’s, Icely; Johnston’s, Cordoaux’s, Jamisons, Dr. Harris, and many others, with their highly bred horses, the names of some of which will be familiar to many people still living. The names of some were Bennelong, Abdullah, Junius, Australian, Scratch, Spring Gun, Councillor, Chance, Satellite, and many others, all sired by thoroughbred or Arab stallions, such as Camerton, Satollito, Abdallah, Hector, etc.

Very comfortable, well provided … old English style hotels were the old Woolpack Hotel, Nash’s, The Red Cow, and others, which boasted attractive and first-class fare, wines, etc. — where a good breakfast, an enjoyable old-style dinner of roast turkey, duck, fowl, pork, veal, etc., well cooked, were placed in their solid condition in front of the seated guests. The equals of those, for excellence, true enjoyment and quality, cannot now be shown anywhere.  They had beautifully clean and comfortable rooms of every description required.  All those, in their best form, were ably provided, appreciated and enjoyed in the famous old town of Parramatta.

The Races usually occupied two days, Wednesday and Friday, ‘ Parramatta Fair ‘ being generally held on the intervening Thursday.  The Fair, held on the ground now occupied by the Town Hall, was usually an exhibition of stock, horses, cattle, sheep, grain, fruit, poultry, etc and for that period of the young colony’s history was very creditable.

Stage-coaches (old English) used to run between Sydney and Parramatta. Fares 5s inside; 3s 6d outside.  Passage (sailing) boats also ran on the river, for cargo and passengers. The boats were large, open, and dull sailors, and often took the whole day to make the voyage to or from Sydney. These boats were of the same style, but not so large, as the old Sydney ballast boats.

The Parramatta Road was infested with bushrangers, and sometimes dangerous to travel over, except by the coaches or in company.  There were no steam appliances in those days.

… Captain Rous of H.M.S. Rainbow (afterwards the Honorable Admiral Rous – the head of the racing community of England) was a great all-round sportsman.  He brought some thoroughbred horse stock – Emigrant, etc. to this colony. During his stay, horse-racing, regattas, and other sports were kept up with great success and …  Up to the time of the gold discovery, Parramatta as a community, was a happy family.  Everyone knew everyone, each person was described, or called, by his occupation – as Jimmy the Milkman, Jack the Painter, Ned the Tailor, Harry the Butcher, Joe the Shoemaker.[2]