World War One – Gallipoli Diaries – Outline of the Gallipoli Campaign, between Paris and Marseilles, 14th March, 1915 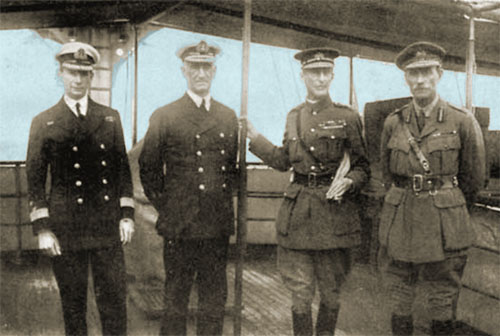 [This first rather lengthy but very interesting entry in Hamilton’s Diary paints, in very broad brush strokes, the Gallipoli campaign as it was outlined to him by Lord Kitchener. Geoff Barker, Research and Collection Services Coordinator, Parramatta Council Heritage Centre, 2015]

Neither the Asquith banquet, nor the talk at the Admiralty that midnight had persuaded me I was going to do what I am actually doing at this moment. K. [Kitchener] had made no sign nor waved his magic baton. So I just kept as cool as I could and had a sound sleep.

Next morning, that is the 12th instant, I was working at the Horse Guards when, about 10 a.m., K. sent for me. I wondered! Opening the door I bade him good morning and walked up to his desk where he went on writing like a graven image. After a moment, he looked up and said in a matter-of-fact tone, “We are sending a military force to support the Fleet now at the Dardanelles [Gallipoli], and you are to have Command.”

Something in voice or words touched a chord in my memory. We were once more standing, K. and I, in our workroom at Pretoria, having just finished reading the night’s crop of sixty or seventy wires. K. was saying to me, “You had better go out to the Western Transvaal.” I asked no question, packed up my kit, ordered my train, started that night. Not another syllable was said on the subject. Uninstructed and unaccredited I left that night for the front; my outfit one A.D.C., two horses, two mules and a buggy. Whether I inspected the columns and came back and reported to K. in my capacity as his Chief Staff Officer; or, whether, making use of my rank to assume command in the field, I beat up de la Rey [General Jacobus Herculaas de la Rey] in his den–all this rested entirely with me.

So I made my choice and fought my fight at Roodewal [battle of Rooiwal], last strange battle in the West. That is K.’s way. The envoy goes forth; does his best with whatever forces he can muster and, if he loses;–well, unless he had liked the job he should not have taken it on.

At that moment K. wished me to bow, leave the room and make a start as I did some thirteen years ago. But the conditions were no longer the same. In those old Pretoria days I had known the Transvaal by heart; the number, value and disposition of the British forces; the characters of the Boer leaders; the nature of the country. But my knowledge of the Dardanelles was nil; of the Turk nil; of the strength of our own forces next to nil. Although I have met K. almost every day during the past six months, and although he has twice hinted I might be sent to Salonika; never once, to the best of my recollection, had he mentioned the word Dardanelles.

I had plenty of time for these reflections as K., after his one tremendous remark had resumed his writing at the desk. At last, he looked up and inquired, “Well?”

K. frowned; shrugged his shoulders; I thought he was going to be impatient, but although he gave curt answers at first he slowly broadened out, until, at the end, no one else could get a word in edgeways.

My troops were to be Australians and New Zealanders under Birdwood (a friend) [William Birdwood]; strength, say, about 30,000. (A year ago I inspected them in their own Antipodes and no finer material exists); the 29th Division, strength, say 19,000 under [Aylmer] Hunter-Weston, a slashing man of action; an acute theorist; the Royal Naval Division, 11,000 strong (an excellent type of Officer and man, under a solid Commander, Paris); a French contingent, strength at present uncertain, say, about a Division, under my old war comrade the chivalrous [Albert] d’Amade, now at Tunis.

Say then grand total about 80,000, probably panning out at some 50,000 rifles in the firing line. Of these the 29th Division are extras, division deluxe.

K. went on; he was now fairly under weigh and got up and walked about the room as he spoke. I knew, he said, his (K.’s) feelings as to the political and strategic value of the Near East where one clever tactical thrust delivered on the spot and at the spot might rally the wavering Balkans. Rifle for rifle, _at that moment_, we could nowhere make as good use of the 29th Division as by sending it to the Dardanelles, where each of its 13,000 rifles might attract a hundred more to our side of the war. Employed in France or Flanders the 29th would at best help to push back the German line a few miles; at the Dardanelles the stakes were enormous.

He spoke, so it struck me, as if he was defending himself in argument: he asked if I agreed. I said, “Yes.” “Well,” he rejoined, “You may just as well realize at once that G.H.Q. in France do not agree. They think they have only to drive the Germans back fifty miles nearer to their base to win the war. Those are the same fellows who used to write me saying they wanted no New Army; that they would be amply content if only the old Old Army and the Territorials could be kept up to strength. Now they’ve been down to Aldershot and seen the New Army they are changing their tune, but I am by no means sure, _now_, that I’ll give it to them. French and his Staff believe firmly that the British Imperial Armies can pitch their camp down in one corner of Europe and there fight a world war to a finish. The thing is absurd but French, plus France, are a strong combine and they are fighting tooth and nail for the 29th Division.

It must clearly be understood then: (1) That the 29th Division are only to be a loan and are to be returned the moment they can be spared. 2) That all things ear-marked for the East are looked on by powerful interests both at home and in France as having been stolen from the West.

Did I take this in? I said, “I take it from you.” Did I myself, speaking as actual Commander of the Central Striking Force and executively responsible for the land defence of England, think the 29th Division could be spared at all? “Yes,” I said, “and four more Territorial Divisions as well.” K. used two or three very bad words and added, with his usual affability, that I would find myself walking about in civilian costume instead of going to Constantinople if he found me making any wild statements of that sort to the politicians.

I laughed and reminded him of my testimony before the Committee of Imperial Defence about my Malta amphibious manoeuvres; about the Malta Submarines and the way they had destroyed the battleships conveying my landing forces. If there was any politician, I said, who cared a hang about my opinions he knew quite well already my views on an invasion of England; namely, that it would be like trying to hurt a monkey by throwing nuts at him. I didn’t want to steal what French wanted, but now that the rifles had come and the troops had finished their musketry, there was no need to squabble over a Division. Why not let French have two of my Central Force Territorial Division at once,–they were jolly good and were wasting their time over here. That would sweeten French and he and Joffre would make no more trouble about the 29th.

K. glared at me. I don’t know what he was going to say when Callwell came into the room with some paper

We moved to the map in the window and Callwell took us through a plan of attack upon the Forts at the Dardanelles, worked out by the Greek General Staff. The Greeks had meant to employ (as far as I can remember) 150,000 men. Their landing was to have taken place on the North-west coast of the Southern part of the Peninsula, opposite Kilid Bahr. “But,” said K., “half that number of men will do you handsomely; the Turks are busy elsewhere; I hope you will not have to land at all; if you _do_ have to land, why then the powerful Fleet at your back will be the prime factor in your choice of time and place.”

I asked K. if he would not move the Admiralty to work a submarine or two up the Straits at once so as to prevent reinforcements and supplies coming down by sea from Constantinople. By now the Turks must be on the alert and it was commonsense to suppose they would be sending some sort of help to their Forts. However things might pan out we could not be going wrong if we made the Marmora unhealthy for the Turkish ships. Lord K. thereupon made the remark that if we could get one submarine into the Marmora the defences of the Dardanelles would collapse. “Supposing,” he said, “one submarine pops up opposite the town of Gallipoli and waves a Union Jack three times, the whole Turkish garrison on the Peninsula will take to their heels and make a bee line for Bulair.”

In reply to a question about Staff, Lord K., in the gruff voice he puts on when he wants no argument, told me I could not take my own Chief of Staff, Ellison, and that [Walter] Braithwaite would go with me in his place. Ellison and I have worked hand in glove for several years; our qualities usefully complement one another; there was no earthly reason I could think of why Ellison should not have come with me, but; I like Braithwaite; he had been on my General Staff for a time in the Southern Command; he is cheery, popular and competent.

Wolfe Murray, the Chief of the Imperial General Staff, was then called in, also Archie Murray, Inspector of Home Forces, and Braithwaite. This was the first (apparently) either of the Murrays had heard of the project!!! Both seemed to be quite taken aback, and I do not remember that either of them made a remark.

Braithwaite was very nice and took a chance to whisper his hopes he would not give me too much cause to regret Ellison. He only said one thing to K. and that produced an explosion. He said it was vital that we should have a better air service than the Turks in case it came to fighting over a small area like the Gallipoli Peninsula: he begged, therefore, that whatever else we got, or did not get, we might be fitted out with a contingent of up-to-date aeroplanes, pilots and observers. K. turned on him with flashing spectacles and rent him with the words, “Not one!”