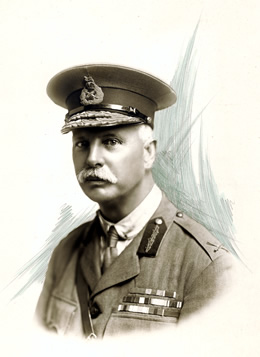 Charles Frederick Cox, was 51 when he enlisted 15 September 1914. At this time he resided at 26 Croydon Road Croydon. He was born in 1863 at Pennant Hills and was educated and married in Parramatta, where he also maintained his connections with the New South Wales Lancers. He joined the Lancers in 1891 and was selected to head a detachment for Queen Victoria’s Jubilee celebrations in London in 1897. He served with the New South Wales Volunteer Corps in the Boer war and was among the first Australians to disemabark at Cape Town, South Africa, in 1899.

Not content with one visit he returned to the conflict in 1901, this time with the 3 New South Wales Mounted Rifles. On the 15th of October 1902 Cox was wlecomed home at a specially prepared conversazione, at the Parrmatta Town Hall, where all the notable citizens gathered to hear him speak. Twelve years later he was speaking at another conversazione held in the same hall in honour of his departure, and as it would turn out, an illustrious career at Gallipoli and in the Palestinian Campaigns.He appears to have been left in Australia after the departure of the first contingent of the 1 Light Horse Brigade as part of the reinforcements. He then was assigned to the 6 Regiment in the 2 Lighthorse brigade and left for Egypt in December 1914. Cox then went to Gallipoli with the 6 Light Horse Regiment and after being wounded in the knee with shrapnel 21 May 1915 returned to the peninsula where he was raised to the rank of Temporary Colonel while in command of the 2 Light Horse Brigade. On 3 November he resumed command of the 6 Light Horse. His stellar career continued and on 28 Novemebr 1915 he was appointed temporary command of the entire 1 Light Horse Brigade. Cox returned to Australia 19 April 1919.