The Parramatta City Council Chambers, previously called the ‘Administrative Building’, served Council for over 57 years. Located behind the Town Hall the Chambers Building was, by 2015, providing services for seniors, and community organisations such as Computer Pals. It was also used to host Council Business meetings which it has done since it opened in 1958.

Walking through this solid building today one finds the attention to detail quite striking. The use of stone and light wood trimming in the interiors of the building is typical of the period and even the fire stairs have wooden balustrades and terrazzo stairs

The site of Chambers Building and Town Hall is one of the most historic in Australia. It was originally a market site, and was first used for this purpose as early as 1792. Two Acts of Parliament have dealt with the site, one for the establishing of markets and a later one for dedicating it as a Town Hall site. For some time after municipal government was granted to Parramatta in 1861 the Council meetings were held in rented premises but over a period of years proposals for building a Town Hall with municipal offices were discussed.

These proposals were realised with the construction of the Town Hall in 1880 which served as the municipal offices for over seventy eight years. Over the 1900s the growth of Parramatta Council increased the pressure on the Town Hall accommodations. The amalgamation of the Municipalities of Granville, Dundas and Ermington–Rydalmere in 1949 made it clear that the existing facilities would be entirely inadequate for conducting the affairs of the much enlarged City of Parramatta. 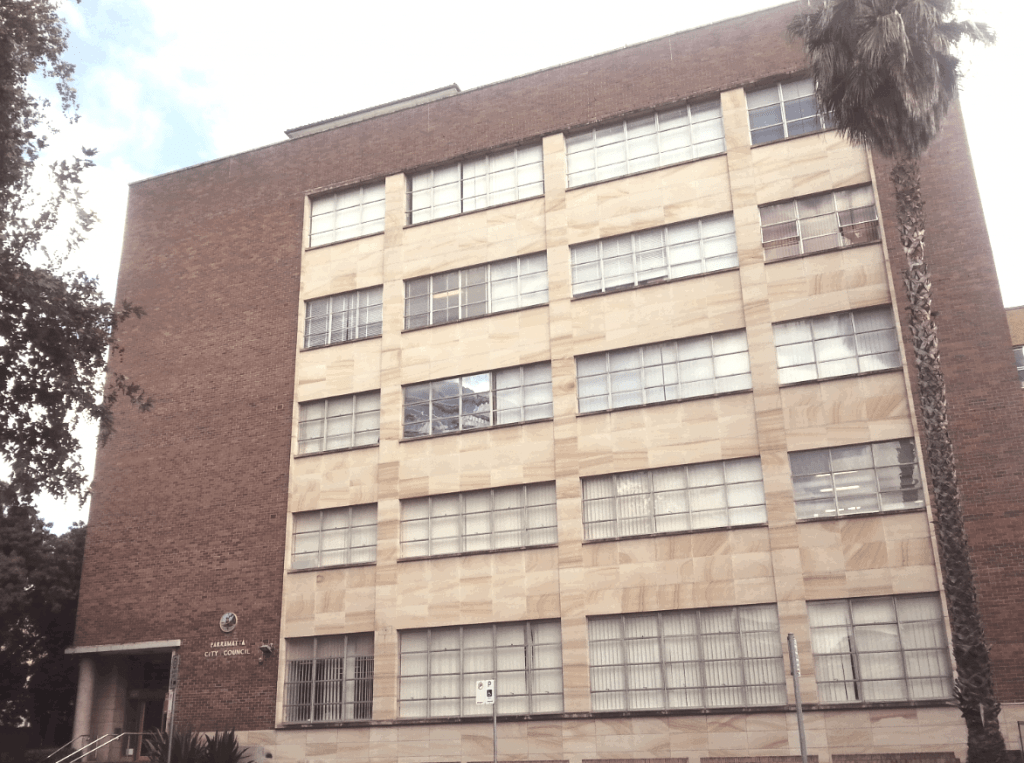 Sketches for a new building were submitted by Architects Messrs Buckland and Druce in November 1954. Finals plans were approved in January 1955 and working drawings issued and tenders called in August 1955. Due to delays in arranging a loan for the building tenders were not finalised until February 1956 with Max Cooper and Sons Pty Ltd awarded the contract.The contract price was £175,907, and with furniture and necessary equipment the total cost was approximately £230,000.

The building was officially opened by Acting Premier R. J. Heffron on 17 May 1958. It was a building which the people of Parramatta had every reason to be proud. It provided accommodation not only for the Council’s staff but also for the holding of Council meetings. For some years previously, the meetings of the Council had been held at Granville Town Hall because of lack of accommodation at Parramatta.

The building comprises six storeys with a basement for car parking. At that time the offices of the various departments of the Council were on the ground floor, first floor, second floor and third floor. The Council Chamber was on the fourth floor, together with reception rooms of the Mayor and the Mayoress. On the roof was the caretaker’s residence, as well as a roof area from which could be obtained a magnificent vista of Parramatta and surrounding areas. The erection of this building resulted in opening of a new street off Macquarie Street leading to to the front of the new building, the creation of Civic Place and the provision of off-street parking.