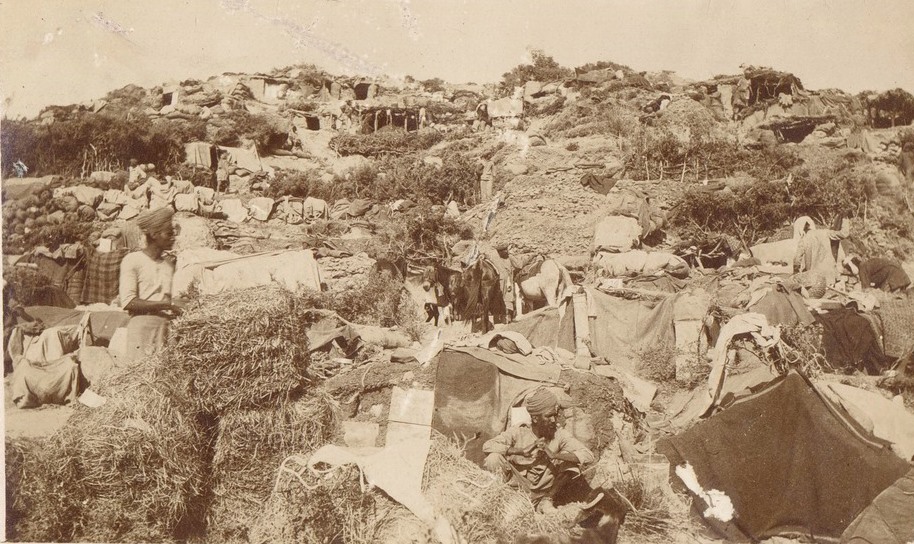 One of the lesser known facts of the Australian and New Zealand engagement at Gallipoli is that these troops fought alongside a small contingent of soldiers from the Indian Army. Over the course of the Gallipoli campaign General Birdwood‘s Anzac force actually included a small contingent of men from the 7 Brigade of the  Indian Mountain Artillery and Indian Transport Corps.

When the war broke out Indian troops were among the first to be drafted into action as a part of the British Imperial Forces and by April 1915 had already been tested in the trenches in France and had fought off an attempt by Turkish Forces to take the Suez Canal. In the original plans the 29 Indian Infantry Brigade, garrisoning at the Suez Canal was to have left with the ANZAC troops as reinforcements. [1] But this never eventuated and the troops that landed at ANZAC consisted of the 21 (Kohat) Mountain Battery (raised in 1851) and 26 Mountain Battery (origins in Golandauze Battalion 1826) made up of 12 small guns, 13 Officers, 820 rank and file and over 500 mules. [2]

While the 3 Australian Infantry Brigade was the first to land on the 25 April it was closely followed by five transports holding the men of the 2 Brigade and the Indian Mounted Batteries. The objective of this Indian battery was to land and push on to the 400 Plateau in the centre of the covering position where it was to be guarded by a platoon of the 12 Battalion. All three brigades were to be ashore by 8.30 am. [3] 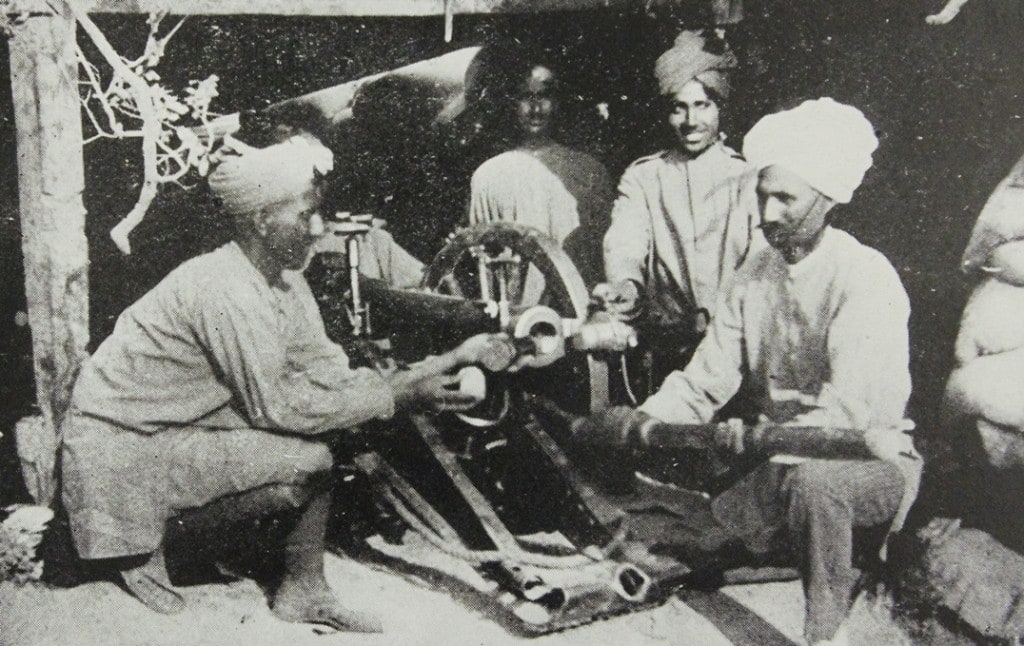 Unfortunately almost all the boats were landed at the wrong place and amid the chaos that followed Lieutenant Rafferty of the 12 Battalion, who was to have escorted the Indian Mounted Battery to the 400 Plateau, was ordered by Colonel Clarke to move to the left to silence a machine gun near the Sphinx. [4] At 10.30 am the 26th was the first of the two Indian Mountain Batteries to land. By an incredible stroke of luck they were met on the beach by Rafferty’s 12 Battalion returning from an encounter at Fisherman’s Hut where the original force of 50 was reduced to Rafferty, a sergeant and 16 men. Nevertheless they marched back up the hills with the guns. 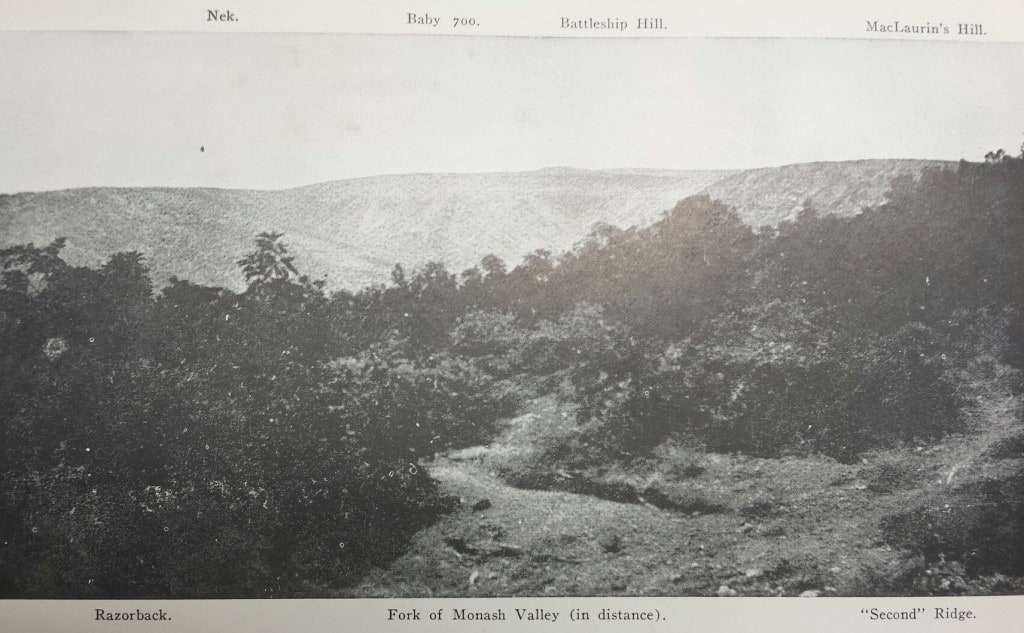 Charles Bean, The Official History of Australia in the War of 1914-1918, Volume 1, The Story of ANZAC, 11th Edition, 1941, plate 391. Shallow pits scratched on 25 or 26 April by Infantry on Razorback near the Mountain guns. The line lay facing out of the picture with the valley in its rear and some of the distant heights in the possession of the enemy, taken on 25 October 1915.

The small guns wheels, trail and two parts of the barrel were packed on a string of mules and wound their way over the steep scrub-land of the Razorback. It remained here for the rest of the campaign, close to a point on the 400 plateau beneath the crest. Colonel Hobb reported that he thought field guns could be placed on the the other side of their position and asked for them to be brought ashore.

By late morning there were three guns on either side of White’s Valley and at noon they opened fire to support the 10 and 11 Battalions on Battleship Hill and Scrubby Knoll. However the main force of the Turkish Batteries quickly turned upon them silencing the small battery and wounding Captain P C Chapman and Jemadar Dulla Icha. Chapman was hit in the forehead and sent to Egypt where he later died.

By 2.25 the shrapnel fire from the Turkish artillery was so intense men were dropping every minute and Kirby who had also been wounded in the head decided to withdraw the battery to shelter. The fire was too deadly to bring up the mules and corpses of the poor animals already filled the valley behind them . Consequently he ordered the guns crews to drop part of the equipment and run the guns back off the plateau by hand.

The guns, men and mules were packed up and marched back towards the beach where they were reorganized. When they came into action again towards the end of the afternoon only four of the six guns could be manned and those with difficulty. Kirby who worked until he fainted from loss of blood was sent to a hospital ship, but waking on board the next day he found a boat moored next to the ship and promptly hitched a ride back to the battery onshore. [5]

At 6.00 pm on the eve of the landing the 21 (Kohat) Mountain Battery was finally landed. But as dusk settled into night the artillery on both sides ceased firing due to darkness. [6] Over the course of the evening the ANZAC commanders decided to set up an inner line of defense to which they could fall back if the need arose. This was formed along an inner line of Plugge’s Plateau and McLaughlin’s Ridge and to enhance these defences two guns from each of the Indian Brigades were emplaced on the almost perpendicular edge of the plateau. [7]

On 1 May an Indian Transport Corps was landed on the beach between the colorfully named “Brighton Beach” and “Hell Spit”. They brought with them light two wheeled mule carts which were used to move the ever growing mountain of engineers stores, barbed wire, timber and tools. It was here with the Indian mule drivers that John Simpson camped along with his famous donkey ‘Duffy’, and it was the Indians who evacuated his donkey when the troops left in December. [8]

These good relations Obviously extended beyond Simpson as on 9 August, 1915, the Warrnambool Standard reported on … the camaraderie  and good feeling existing at the Dardanelles between the Australians and the soldiers of the Indian mountain batteries, who fought side by side in the famous landing at Gaba Tepe. The batteries did so well and gallantly that the Australians have metaphorically taken them to their heart. All are the greatest pals imaginable … [9]