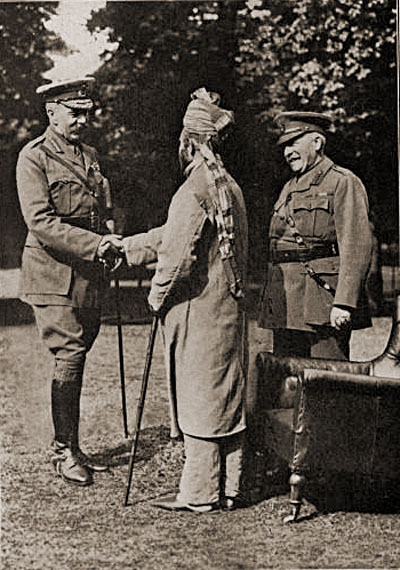 Mir Dast’s family were of the Afridi tribe of Pathans, and grew up in Maidan, Tirah, a North-West Frontier Province of British India.At the age of 20 he enlisted in the 1st Punjab infantry, an Indian regiment whose roots lay in the Punjab frontier force. In 1903 the regiment was renamed the 55th (Coke’s) rifles as a part of Lord Kitchener’s reorganization of the Indian army . In 1909 He was promoted jemadar, this rank had been adopted by the British from its traditional role for men who oganised fighting for a local Indian zamidar or lord.

The first divisions of the Indian Army (3rd Lahore and 7th Meerut) arrived in France in September 1914 under the command of General Willcocks and served on the western front until October 1915, mainly in the Givenchy/Neuve Chapelle sector.Indian losses were very heavy, and men, like Mir Dast, were drawn from regiments in India to fill the depleted ranks of those in France. In Mir’s case he was one of those cross-posted from Coke’s to the 57th Wilde’s rifles (frontier force) in the 7th (Ferozepore) brigade of the Lahore division.On 26 April 1915, some seven months after arriving on the front, and the day after the Gallipoli landing, the Lahore division was ordered to counter-attack in conjunction with the French at Ypres. The shelling was heavy on both sides and the Indian troops suffered a number of casualties as they moved into position for the daylight attack.It was 2 in the afternoon when Mir Dast and the Wilde’s rifles surged forward along the Ypre-Langemarck Road and started their advance across 1500 yards of ‘shell swept front line’.
As the Ferozepore Brigade advanced, they were decimated by German shells and rifle and machine-gun fire. Within 15 minutes the front-line survivors of the 57th Rifles, under the wounded Major Williams, had made it to within 90 or so yards of the German trenches but there they were pinned down. Major Duhan, Captain Mackie, Subadar Badawa Singh and Jemander Kirpa Singh were all killed near the enemy trenches. A severely wounded orderly Bhan Singh attempted to carry Captain Banks through a storm of bullets and when unable to carry the body any further took his accoutrements and carried these back to safety.

He received and Indian Distinguished Service Medal (ISDM) for these actions.

It was at this time that nozzles of what looked like fire hoses were lifted over the edge of the trenches and through these the Germans began to pump a deadly cloud of yellow mustard gas, which drifted with the wind across the allied positions, including those of Ferozepore.

Only four days earlier the Germans had made their first gas attack at Langemarck but already the Indian troops had tried improvised a solution. Instead of gas masks they dipped the ends of their turbans in chloride of lime, and tied them over their mouths; unfortunately in practice this offered little protection as the gas also affected the eyes. As the deadly cloud enveloped the French, British and Indian troops confusion and panic started to spread and they rapidly withdrew, one Indian havildar was reputed to have shouted out “Khabardar, Jehan Na pahunche”(look out we have arrived in hell).

As a result of the attack most of the brigade fell back down the slope in some confusion and Mir Dast was one of a handful of British and Indian soldiers who attempted to hold their ground. Recovering from the immediate effects of the chlorine gas, and finding the British Officers were all either killed or wounded, he then rallied a small group of survivors, which although driven back slightly by German counter-attacks held on until nightfall, when he was ordered to retire.

As they withdrew Mir Dast led his own men to safety along with others found sheltering in old trenches along the way. He then risked his life again by going out into no-mans land and helping to carry back eight wounded British and Indian officers, while doing so he was wounded a second time. The 57th suffered 370 casualties, including 3 British and 3 Indian officers killed.

For these actions Mir Dast, who had already received the ISDM in 1908, was recommended for the Victoria Cross (VC), and was announced on 29 June. It was the the fourth Victoria Cross awarded to an Indian since they had become eligible for the award in 1911.

At the second battle of Ypres saw 3888 men of the Lahore division’s 15,980, killed, wounded, or missing. Many of the wounded, including Mir Dast, were sent for treatment in Brighton, where the Pavilion and several other buildings in the town had been converted into hospitals for Indian soldiers. In early July the secretary of state for India, Austen Chamberlain, met a group of wounded Indian officers, including Mir Dast, on the lawn outside the Pavilion. The picture above is likely to have been taken at this time as Mir Das still appears somewhat frail.

As he himself said … The Victoria Cross is a very fine thing, but this gas gives me no rest. It has done for me.

In 1916 Mir Dast was awarded the Order of British India, second class, making him one of India’s most-decorated soldiers. But he never fully recovered from his gas injuries and was removed from the Indian army’s active service list in 1917. He died in his home village sometime around 1945.