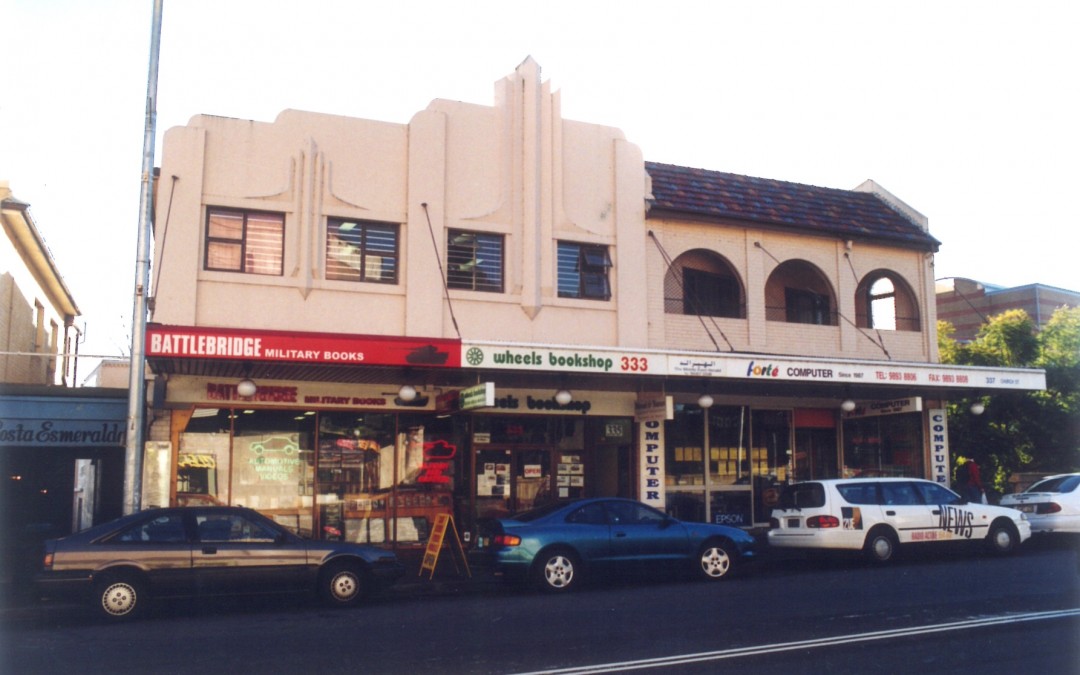 The two buildings at 333 to 337 Church Street stand on the South Side of the Lennox Bridge. Both are the latest in a long line of European use which dates back to the lease of William Barnes in the 1820s. As Parramatta is the second site of colonial settlement in Australia almost every property along the banks of the city’s river has a long and convoluted history and these are no exception. This was particularly the case for these properties as they stand at the juncture where the first substantial bridges were built to cross the Parramatta River, opening up the land to the north. 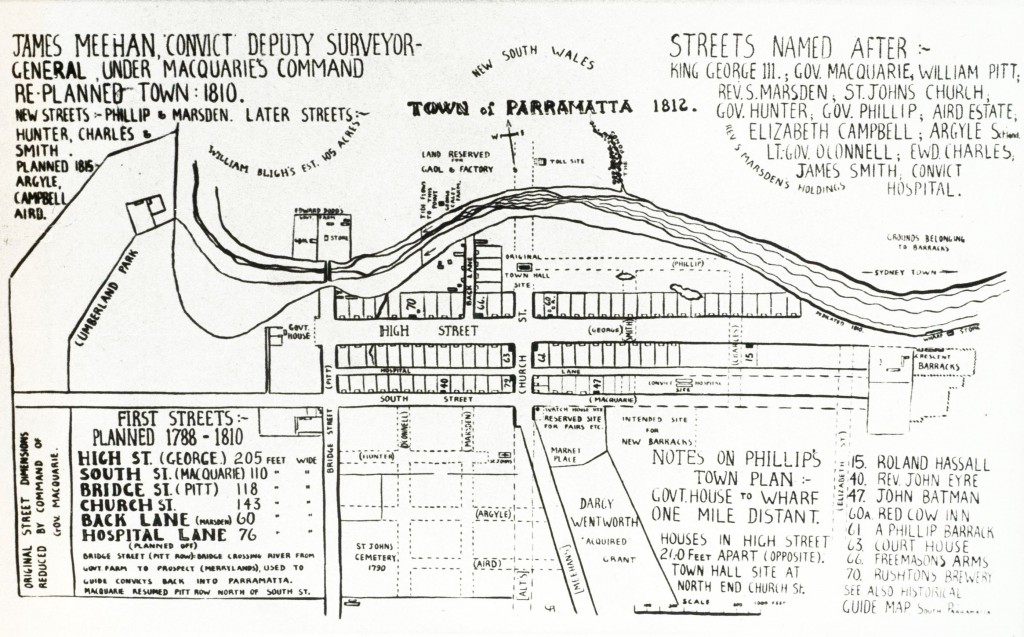 Barnes’ original lease stretched back to take in the car-park behind these buildings and backed onto the long since gone ‘Hospital Lane’ as did a second lease on this site belonging to a Mr. Smyth. The area at this time was conceived by Macquarie to be at the very heart of the city with the original ‘Town Hall’ and ‘Market Place’ planned for the other side of Church Street. However these plans remained on the architect’s table and the ‘Town Hall‘ as we now know it was eventually built in Parramatta Square, next the St John’s Cathedral, as was the ‘Market Place’.

Sometime around 1835 number 337, which appears to have included the large block of land behind Church Street, was sold by Barnes. And by the 1840s George Smyth was storekeeper at the North Parramatta ‘Female Factory’ while his wife was the appointed matron there in 1844. Sometime around 1847 they were both dismissed for …. having permitted great irregularities to take place in the establishment wholly at variance with the system of discipline necessary to be observed.

In 1850, an article in the Sydney Morning Herald suggested that the area now included a slaughter yard owned by William Piesley … in or near Phillip-street. This proximity to the water was a blessing for industry but more of a curse for the local community. The Cumberland Argus for example claimed that the slaughter houses found along the river in the 1820s were  … a nuisance to the town, particularly during the summer months, when the smell from them was scarcely sufferable.

While the river was sometimes scarcely more than a creek during droughts it could also turn into a raging torrent during heavy rain. In 1864 an account of a major flood gives us an insight into life on this part of Church Street for one shop owner

… at six o’clock the river had risen to a still greater height, reaching the premises of Mr. Menser’s boot and shoe store in Church-street, the yard attached, and the kitchen being flooded. At this period of the flood the top of the arch of the Church street Bridge was almost reached.

The Argus also published a local account of the businesses on this part of Church Street between Phillip Street and Lennox Bridge. It described how after crossing Phillip Street and walking north there was first … a small weatherboard shop kept by Mr. Joe Brogden, and the space between that and Lennox Bridge was occupied by Mr.Crouch, painter; W. Maling, jeweller; George Aspinall, hairdresser; T. Nicholson, tailor; Mrs. Craig, lollie-shop: and Vahrenkamp’s buildings. Beyond Vahrenkamp’s was a tinsmith’s shop, and this was followed by Mr. Beukers, bookseller; Mr. Byrnes, blacksmith; Mr McDonald cabinetmaker; and Mr. Charles Risby’s famous ‘Little Tea Shop.’

While the reminiscences have perhaps mixed up the actual order of the buildings the article does go on the say how this section of Church Street was known locally as ‘Cheapside’. On the northern side of Lennox Bridge, where the Riverside theatre is now situated, was vacant land, and on the other side of Market-street was Prince Alfred Square.

By 1877 most of the frontage along Church Street had been filled by two or three story buildings. One of the exceptions was the building located on the northernmost allotment (once the site of 337 and/or 339 Church Street). This property had remained in the hands of the Byrnes family, who had owned it since John Byrnes a blacksmith, purchased the lease in 1835 from William Barnes.

It was sold in 1888 to Thomas Barber who sold it in quick succession to William Brodie. A detail of a photo of Lennox Bridge from around this time shows the rear of his two story cottage which takes up the slope of the site as it extends to the west.

In 1889 there was another major flood which caused major scouring of the southern bank down to the bedrock behind these properties. One house “Riverside’ had been built in the 1870s on this site close to Marsden Street and during this flood the main western portion of the house collapsed. It was rebuilt between 1890 and 1895 as a single story house with striped verandah roof at the same location facing Marsden Street

Perhaps as a consequence of the severity of this flood the decision was made in 1892 to build the retaining wall we can still see today running along the southern bank between the weir and Lennox Bridge.

The next stage in the development of the site was the extension of a tram line to Baulkham Hills in 1901. This crossed the Lennox Bridge adding to congestion and increasing the call for greater pedestrian access. As a result a cantilevered walkway was built on the Western side of the bridge and when this proved inadequate plans were made to extend the width of the bridge by adding another section to the western side.

These plans came to fruition between 1934-1935 when the increased motor traffic using the bridge prompted the Department of Main Roads to widen the bridge. Another consequence of this decision appears to have been the purchase of 339 from the owner Mr. Beasley to allow for the curved abutment of the bridge (there is some confusion surround the exact numbers at this time and some reports claim it was 337A and 337 that were purchased while 339 remained government owned. Beasley’s ownership had been contested by Government since the late 1920s). This also appears to have led to the removal of the old buildings on the site and the constructions of the ones now on the site. 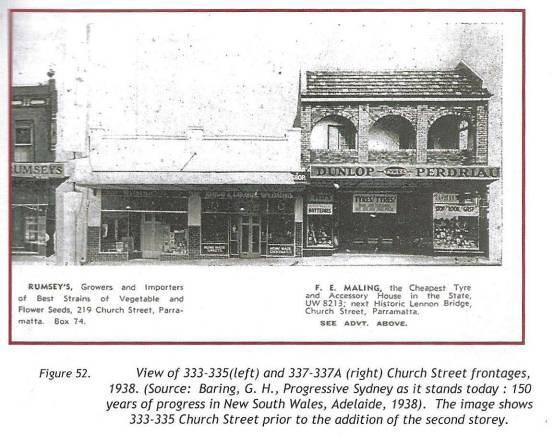 In 1938 the properties appeared in a publication issued to celebrate Parramatta’s 150th year since European settlement. As we can see from the photo above the site now appeared to consist of four properties 333, 335, 337A, and 337 Church Street. F. E. Maling appears to have occupied the end site where he set up his cycles, rubber tyre business.

In 1939 the three property’s came under one owner and the was site treated as one. This appears to have been when the second story and Art Deco facade on 335 Church Street was erected. It is also likely that this was also when the arches on 337 were rendered as well in order to create a unified frontage.

By the 1940s parking had become a serious problem for Parramatta’s retail areas and the development of the Church Street frontages over the 1800s had left a large area of ground in the centre of the block that did not address any of the streets. This had been occupied by a commercial yard containing a number of sheds and an office and with the introduction of parking restrictions on the main streets in the mid 1940s Council began purchasing the back areas of allotments for public parking.

Finally between 1962 to 1972, the current Lennox Bridge car park was constructed. This entailed the removal of a residence in Phillip Street for vehicle access and was done about the same time ‘Riverside’ on the Marsden Street frontage was demolished to form a car park for St Andrews Church and Hall. This land has since been redeveloped for a medium rise residential building.