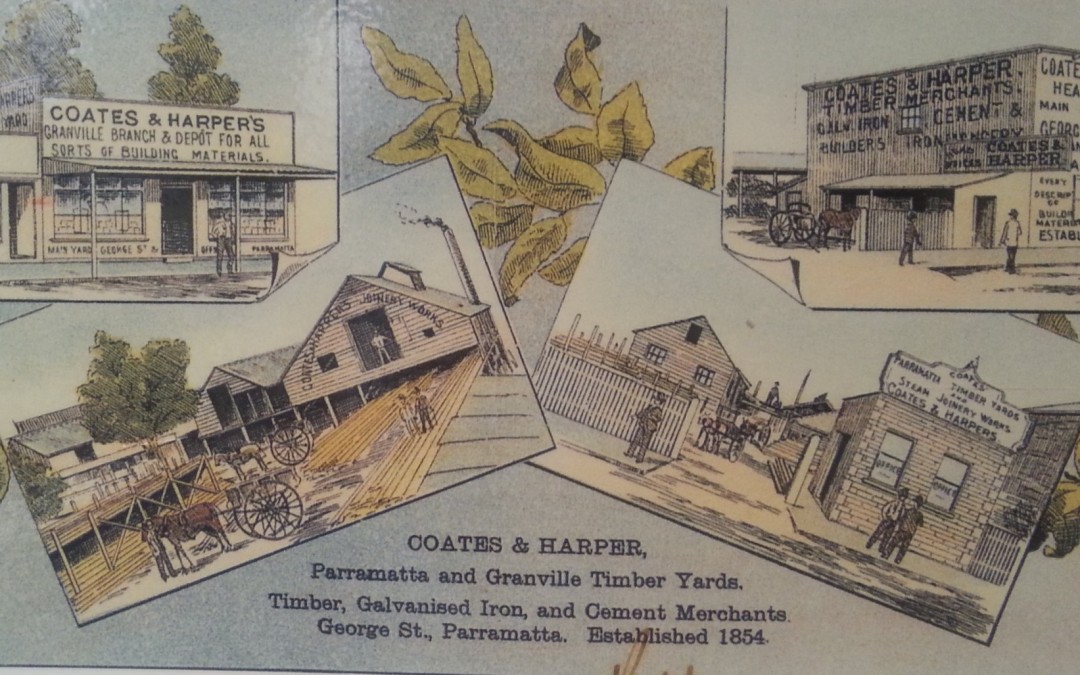 Early Colonial Settlement – Garnham Blaxcell was one of the first European colonists and in 1806 he owned 1125 acres which covered the area where the centre of Granville municipality now stands. One of the thoroughfares, Blaxcell-street, connects the name of the grantee with modern Granville. The southern portion of Granville is on part of a grant issued to John Thomas Campbell in 1823. This was called the “Quid Pro Quo” estate, as it was issued in lieu of a grant in George-street, Sydney. Other well-known landowners in the district were John Harris, William Lawson andWilliam Charles Wentworth. T’he ‘Drainwell Estate’, as Blaxcell’s grant was called, passed into the hands of Sir John Jamison.

Native dogs were numerous in the area and the traps set for them led to settlers naming one of the main thoroughfares ‘Dog Trap’ road, this was later changed to its current and more familiar name, Woodville Road. In the 1830s near Duck Creek, on its Western side, there was an inn known as the ‘Cottage in the Grove’ and between 1840 and 1850 an inn called the “Farmers’ Arms” was established by James Wright between ‘Duck River‘ and ‘Duck Creek’.

The Forest That Was – Before logging began in Granville the area was covered in forest consisting chiefly of Iron-bark, Black butt, Box, Stringy-bark and other Eucalyptus trees many of which could be found along the creek and river banks. Sydney’s  expansion created an insatiable appetite for these hardwoods and led to the felling of much of the timber west of Homebush, particularly those trees found along the banks of Duck Creek and Duck River. There were few restrictions on timber getting and it seems some landholders actively encouraged others to come onto their land to clear the trees as it opened up the land for pasture.

One of the first wood contractors in the Granville area was Mr. Nevett who lived on the east-side of the Duck River near Ferndell Street. One of the mainstays of his business, (and later that of John Tunks) was the supply of  piles made from the local iron-barks which were used to construct many of the wharves around Sydney. Much of the timber was cut by pit sawyers and while some was used for the construction of buildings in the district a considerable quantity of it went by water to Sydney. These great ironbark logs were hauled by bullocks through the bush to a point on the bank of Duck River where they were rolled into the water and at high tide floated down the creek to the Parramatta River before being ferried to Sydney.

Building the Railway – Granville township really came into being in the 1850s as a result of the construction of Sydney’s first rail line which terminated at ‘Parramatta Junction’ (originally in Granville, just up from the toll house on ‘Dog-Trap’ and ‘Parramatta’ roads, this was station was lost in 1859 when the train line was extended and a new station built at Parramatta).

One of the big problems for William Randle, who was constructing the line, was sourcing and processing the wood he required for wagons, sheds and rails. As a result he decided to construct his own sawmill on the banks of Duck Creek and set up a workers camp on land facing ‘Dog-Trap’ road and slightly south of the rail terminus at ‘Parramatta Junction’. In 1853 Randle sought, and gained, approval to use a saw-bed imported by the line’s first engineer, Francis Shields. By late 1853 the saw-bed along with an 8 horse-power steam engine had been set up on ten acres of near ‘Duck Creek’ and it was being used to cur temporary rails, sleepers, keys and scantlings.

It appears the actual work in operating this saw-mill was contracted to the Sydney Firm of Scott and Jolly who had brought the right to cut and remove trees from the Newington Estate. They then appear to have taken over Shield’s saw-mill on the Duck River. By the 1870s the indiscriminate felling of timber seems to have led to the end of the trade and left in its place vast areas denuded of its forest covering. From this time on the business was dominated by timber merchants like Coates and Harper  who imported their timber from outside the district.

Opening of the Railway Line, 26 September 1855 – The ‘Vauxhall’ inn was licensed when the railway was opened to Parramatta Junction by William Stone and was originally called the ‘Russell Arms’ after Captain Russell, son-in-law of Sir John Jamison. When the railway was opened to Parramatta Junction Mr. Stone advertised that he would sell a “bucket of rum for a penny.” However these buckets were specially made for the occasion and were about the size of a wineglass without the stem. They were solid wood with a slight depression at the top and held about a teaspoonful 0f rum. Strangely enough those who were fooled into buying them instead of being angry at Mr. Stone instead were more anxious to see their friends taken in as well, and praised the bargain they had made. No doubt handing a handsome profit to the innkeeper

Bringing Back the Giants – Unfortunately the building of the rail road and the opening up of more land and suburbs across Sydney saw the decimation of the original Granville forests. But today both Parramatta City Council and Auburn City Council are working together through a number of council and community programs to restore the banks of Duck River. Works include planting trees grown from the remnant trees that belong to the once magnificent Granville Forest.