Walking down the steps from the end of Albert Street to Fleet Street, Parramatta North, what is most noticeable, apart from the sudden drop in street levels, is the abundance of roughly hewed  sandstone fencing defining the boundaries of properties along the street. This abundance of sandstone provides an obvious clue to what was once on this site.

On the eastern side of Fleet Street, between Fennell and Albert Streets, hidden by apartment blocks and government buildings is the remnant of an old quarry from which some of Parramatta’s most historic and significant buildings were constructed.

Stone from the Fleet Street quarry was used as early as 1818 to construct the Francis Greenway designed Female Factory which was completed in 1821. The quarry most certainly supplied the stone for Parramatta Gaol, as well as other buildings located in the precinct including, perhaps, the new Lunatic Asylum which replaced the Female Factory Building. By 1861, once the construction of Government buildings ceased in the locality, the quarry was reserved for gaol purposes.[1] 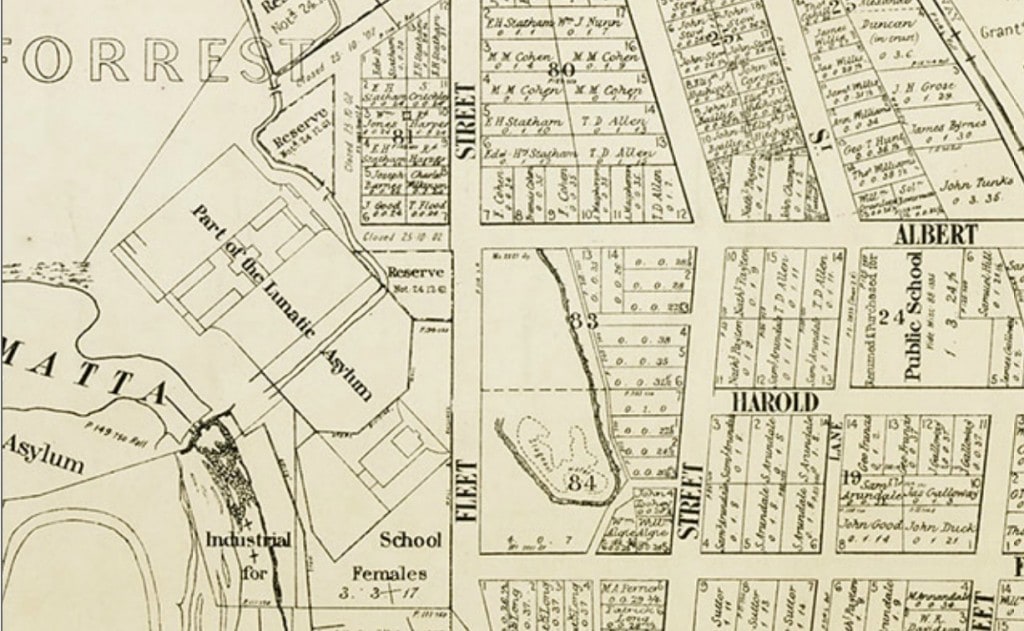 In 1862 the Department of Lands made it known that quarries in the Domain area were being put up for sale. For Parramatta Council the Fleet Street quarry presented many economic advantages for municipal works. The stone provided a fine face and was hard and the quarry was within town limits and easily accessible. Mayor James Byrnes made a verbal request to the Department of Lands for the Fleet Street quarry to be used for municipal purposes.[2]

In October 1862 the Council received a letter from the Department of Lands permitting the Council to “use the stones at the quarry of the Lunatic Asylum.” [3] By 1864 the Surveyor General instructed a survey of the Municipal Quarry be done before  it was  handed over to the Council in legal form.[4] Following the formal acquisition of the quarry Council began tendering out the removal of stone from the quarry. One such tender, for example, related to the kerbing and guttering of Church Street between Macquarie and George Streets with tenders invited to supply dressed kerbing “and that guttering be procured by the Corporation Labourers at the quarry in Fleet Street… “[5]

By 1890 the face of the quarry was almost 9 metres deep and Albert and Harold Streets had become unsuitable for traffic. There were, by this time, sixteen dwellings fronting O’Connell and Albert Streets, and Council came under increasing pressure by local residents to close the quarry. Blasting operations in the quarry was posing a serious danger to human life and property.  Stones from blasting operations had fallen onto the roofs of homes, explosions “were an annoyance for women and invalids”, and children attending school in Harold Street were at risk of injury. The Minister of Lands ordered a report be done by the Surveyor into the causes of the complaints. [6]

The report was completed in May 1892 by Chief Surveyor Twynam. The report confirmed the dangers quarrying works posed to residents and though the site was valuable for stone, quarrying should cease and the land be sub-divided with a view to sale. [7] 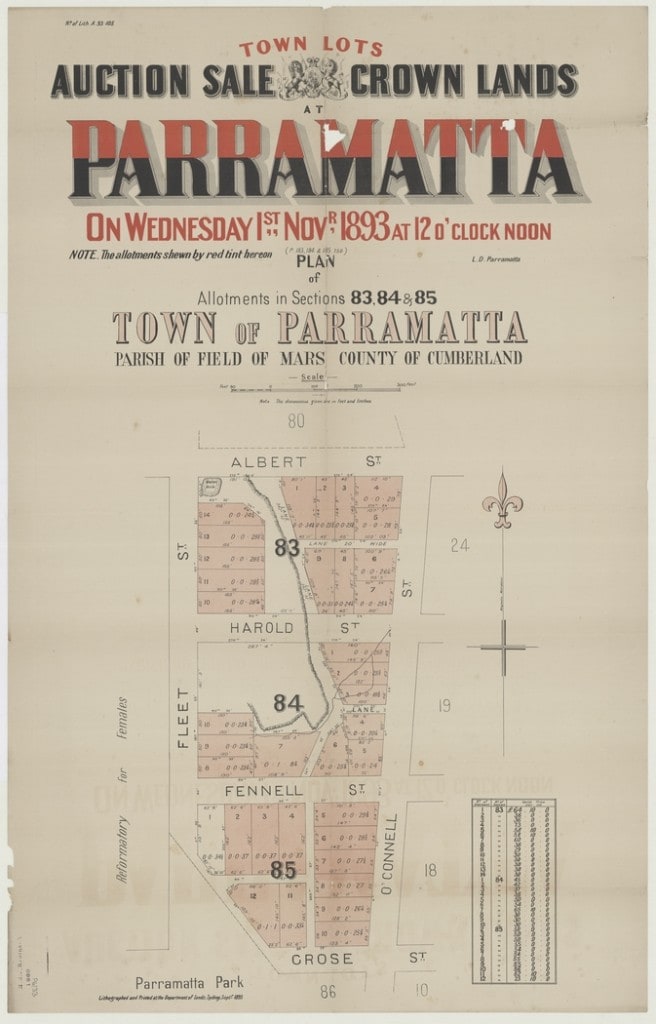 Auction Poster 1893 showing the subdivision of land around the quarry. SLNSW c035480034h

Based on the report the Secretary for Lands decided that the Municipal Council be informed that permission to quarry on the land be withdrawn. [8]

Soon after the closure of the quarry an auction sale of land was advertised. The above 1893 subdivision poster shows subdivided land in and around the quarry. However it appears the quarry land remained in the hands of the government with no development occurring until the 1970s and 1990s.