Female Factory and the Thwaites and Reed turret clock 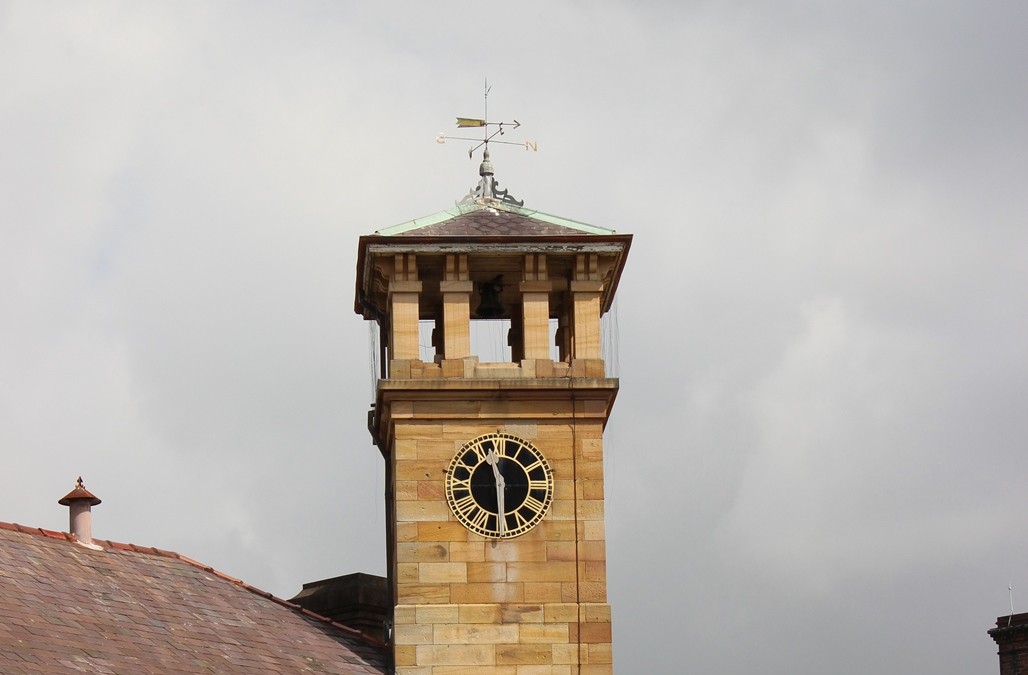 The front of the 1821 Female Factory building had a clock
thought to be one of the oldest public clocks in Australia. The original clock was made by Thwaites and Reed who are best known for their turret-clocks which throughout the 1900s found their way into the clock towers of cities around the globe.[1]

For over 30 years they were also responsible for rebuilding and looking after what is arguably the most famous clock in the world  ‘The Great Clock’ at the Palace of Westminster, more affectionately known as ‘Big Ben’.[2]

Here in Australia people would be more familiar with Thwaites and Reed’s ‘Royal Clock’ in the ‘Queen Victoria’ building. While in Parramatta residents have for over a hundred years kept time using its twin, the turret clock located in the steeple of St John’s Cathedral.

The turret-clock in the original Female Factory building was one of five, all made to the same specifications, which were gifted to the Colony by King George. When this clock arrived in Australia it was installed in the newly completed ‘Female Factory’, while another was installed in St John’s Cathedral.[3]

Anne Mathews, a volunteer at the Heritage Centre, has found Colonial Secretary Papers Reel 1055 – A directive made in 5 September 1827 by Governor Darling to Alexander Macleay, directs Mr Robertson to install a clock at Female Factory,currently in the commissariat in Sydney. 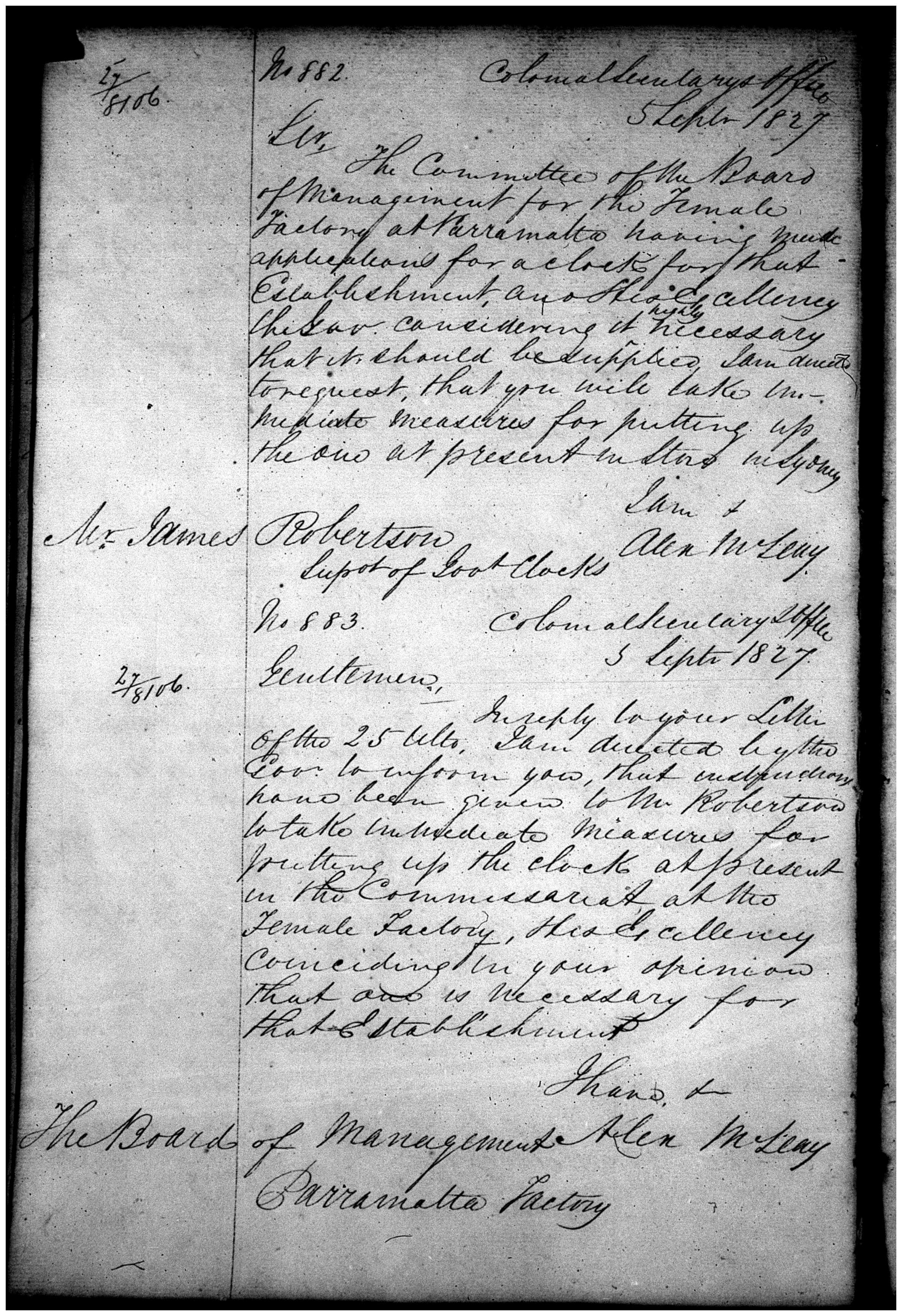 Many researchers believe that in 1885 this Female Factory clock was reinstalled into the Asylum Building on the same site. However when I visited the site recently I noticed this clock, which can still be seen in the tower has more than one face. This would suggest that the old Female factory clock which had only one clock face was heavily modified or a new purpose-built turret clock with similar clock faces was installed instead. We would be very interested if any other researchers were able to help us shed some light on this.

Still a listed company today ‘Thwaites and Reed’ are reputed to be the oldest clock-making company in the world with founder Aynsworth Thwaites first opening the doors in 1740.[4] They became ‘Thwaites and Reed’ in 1816 when John Twaites formed a partnership with George Jeremiah Reed.[5] Although very successful and owning their own workshop in Clerkenwell, England, it appears they also contracted out a lot of their work to other prominent clock-makers on their behalf. Included in this list are names like ‘Barraud and Lund’, Dutton, Ellicot and Earnshaw.[6]

By the time this clock was made the company was already one of the most respected in Britain and this was undoubtedly one of the main reasons they were commissioned to produce the five clocks for Australia.

Some 90 years later the Australian astronomer John Tebutt, who certainly knew his chronometers, praised the quality of the ‘Thwaites and Reed’ turret-clocks, including the one installed at the ‘female factory’.[7]

In 1932 William Freome was still praising the quality of these timekeepers claiming that,

The old clocks in the towers of St. John’s, Parramatta, and St. Matthew’s, Windsor, still keep excellent time, despite the fact that they are over 111 years old, and both have narrowly escaped being struck by lightning.[8] 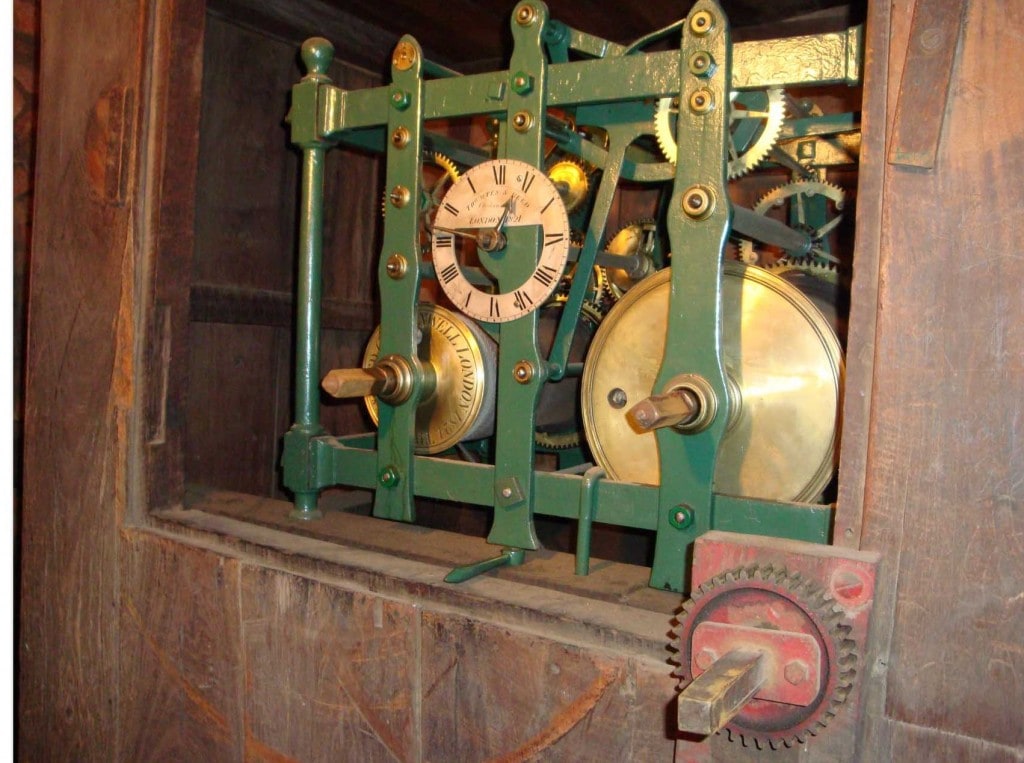 In 1912 Mr Fred Burgin, who had been attendant for the St John’s church clock for over 40 years, wrote to the Cumberland Argus and described in detail the workings of the clocks.

The clock was made by Thwaites and Reed, Clerkenwell, London,in 1821. The works measure 2 ft. 6 in. x 2 ft. x 2 ft. The pendulum is 6ft. long. The outside dial is 6 ft. in diameter. The striking weight is round, and measures 2 feet long x. 9 inches diameter and weighs 9 cwt. The time weight is 1 foot long x 9 in.in diameter, and weighs 5cwt. The clock is wound with a crank-key, like a windlass. It goes six days, the weights falling 25 ft.

He also stated that,

The clock was placed in St. John’s tower by the Government, in 1821. Similar clocks were also erected at the following places at the same time: Parramatta Government Factory (now Parramatta North Hospital), Sydney Town Hall, Church of England at Campbelltown and the Victoria Barracks, Sydney[9]

In 1912 St John’s Clock, was given a complete overhaul with the face being repainted and the mechanical workings sent to Sydney for repairs.