A Description of the ‘Parramatta Lunatic Asylum’, 1871 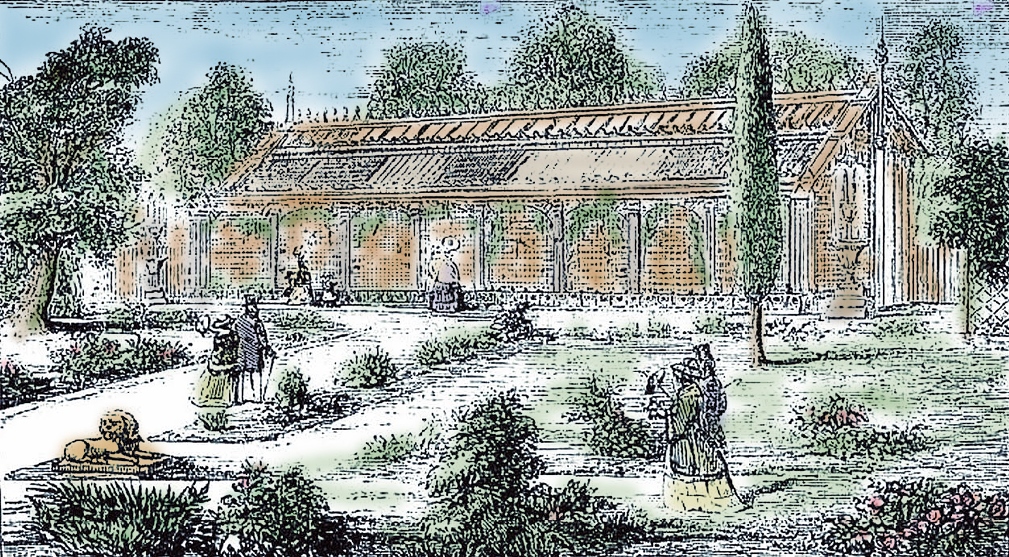 By the 1870s the Asylum had grown to be the largest Government establishment in Parramatta, housing around 800 inmates. Of these 245 were housed in a new wing on land adjoining the main building.[1] Clearly of great significance as an illustration of the importance of these reforming institutions the Australian Town and Country Journal, published the following account in 1871

On entering the large gate which forms the front entrance, I was courteously received by the superintendent, Dr. Wardloy, and shown throughout the whole building. Going down a pathway and entering a gate to our right, we found ourselves in the main refractory yard (about three-quarters of an acre in extent) when a never-to-be-forgotten sight met my eyes. It is in this yard that the refractory patients to the number of 200 are kept during the day. Their meals are served out in a large open shed in the mid.

Crossing this yard and passing a gate to the left, we entered another enclosure about a quarter of an acre in extent, whore the imbecile or quiet patients roam about. At one side were cells or cages for refractory patients or those afflicted with epilepsy. In the centre and around this yard, are a number of dormitories, the hospital, lavatories, etc.

Dormitories Nos 1 and 2 are in a two-storey building apart from the rest. In the hospital there were but two or three patients actually laid up; a fact which speaks well for the management of the establishment considering the large number in the asylum. On a former visit, a remarkable case, worthy of note, attracted my attention: that of a fine strapping fellow completely nude. The poor maniac could not be compelled to wear clothing, and wonderful to relate seemed to thrive remarkably well. He has since been partially cured of this mania, though when in the presence of strangers he even now strips himself.

The epileptic dormitory contains twenty-two beds, and another compartment is called the “flogward,” wherein the dangerous patients ore confined at night. The lavatories are fitted with arrangements in which the patients bath once a week. We next visited the criminal yard, which is at the northern end of the refractory yard. It is also about a quarter of on acre in extent, and near the centre is the building for the safe keeping of patients at night. This is a fine stone structure, three stories high, each floor containing nineteen cells. Of the fifty original inmates here, I was informed that at least half were confined for murder, and many are termed ‘Q.P.’s,’ or ‘Queen’s pleasure men’.

The culinary department for this large establishment deserves more than a passing notice. The whole of the cooking required is done in the institution, principally by patients, and the food is of the best quality. Vegetables, meat, and bread form the principal portion of their food, and soup is also served up daily. The green yard, or more properly, garden, is on the men’s side of the building to the left going in. It is about an acre in extent and nicely planted with fruit trees and flowers. An elegant fountain works in it and plays into an aquarium with gold-fish-the gift of the present mayor, Hugh Taylor, Esq.

The fountain and aquarium are of nicely cut stone, made by the patients of the institution. In the large pavilion in the centre of the green yard, the patients (about eighty or ninety) dine in the dav time. The female department is under the management of an excellent lady named Mrs. Burn, who has been in charge for a number of years. About two acres of ground is devoted to them (numbering210, including children).

In the women’s hospital only a few were laid up. In a small yard fenced off at the corner the refractory patients are confined. The sleeping apartments for the women are in a large stone building in this yard. The rooms at the west end are used as a laundry, and at each side to the end are the cells for the violent patients. The cells on the second and third floors of this building. are used for general dormitories, but the want of sufficient accommodation, is greatly felt and complained about, not only in this but in other parts of the institution.

It may be interesting to state that several of the immense buildings which now form the lunatic asylum, were not originally erected with this object. Some forty or fifty years ago they were built for a Female Factory, and at one time contained 1300 women who were sent to the colony in those days.

Among the patients now confined here are many professional (particularly medical) gentlemen. I was introduced to the once-famed Dr. B, also a former medical attendant of the institution, Dr. R, Dr. S, or rather Dr. Murphy, as he prefers to designate himself, was exceedingly polite to us, though somewhat pompous in his bearing to the other patients.

Another patient (a surveyor) was marching up and down the yard labouring under the extraordinary delusion that a number of demons were endeavouring to force gas into his body, and from the materials within his reach he had formed a kind of bonnet or covering for his face to prevent this.

A patient, whose delusion was that he is son-in-law to the Governor, was declaiming in a refractory cell. The insanity of a well-known and comical character, known as ‘Foggy Dhu’ evinces itself in an inordinate weakness, for the volunteer uniform. He strongly recommended me to join the ranks.

Messiahs, Kings, Emperors, Nobles, Generals, and owners of large properties are numerous, and many of them were moving about what they seemed to think proper pomp and circumstance of their position. In the criminal ward Cameron, the murderer of the respected Dr. Greenup, and Bertrand the perpetrator of the “Kinder tragedy,” were pointed out to us. In one cell was Kennedy, the man who assaulted Mr. D. Buchanan. The attendants dare not open his door for fear they would be immediately knocked down by this extraordinary character, who is represented as an educated gentleman.

In the “green yard” the former Jack Ketch of the colony was pointed out. He is hopelessly mad and on inquiring who and what he was, he replied by tracing a line with his fore-finger round his neck, at the same time giving an ominous jerk and click!

Extensive additions to the Asylum were completed about fifteen months since. They are built on grounds ‘about five aores in extent, and surrounded by high palisading, and are situated at he western side of the asylum proper. The principal addition is a large wooden ‘structure nearly 300 feet long, and has a wide verandah running the whole length of the building, and in which the patients (when not in the field enjoying themselves) rest, and have from it a view of the northern part of the town.

The large mess room or hall is 250 feet long, but is separated into three divisions; two of fifty feet each, and one of 150 feet in length. The latter can again be divided by folding doors which can be used if necessary. These rooms are fitted from end to end with tables and forms, and are lofty and well ventilated throughout in the most complete manner. Opening to the westward are five doors at equal distances, which enter the five wings or dormitories each of a total length of 120 feet and a width of thirty feet, and again divided by a semi-partition, making ten chambers in all.

Each of these dormitories afford sleeping accommodation for twenty-five patients and, one attendant, or for 250, patients and ten attendants in all. The number at present in the new wing is 243, so there is little room left. A long covered-in passage runs from end to end at the rear of these dormitories, and branching off are lavatories, baths, etc., arranged in a convenient manner.

The kitchen is lofty and fitted up with patent stove and large coppers. A most pleasing feature was the great cleanliness observable throughout the whole of these establishments. The grounds are being laid out tastefully, and planted with shrubs and flowers and a large portion of the thirty acres reserved for the Lunatic Asylum is being cultivated with vines, fruit trees, and vegetables. In fact, the vegetables, with the exception of potatoes for the whole of the establishment are now grown on the ground.