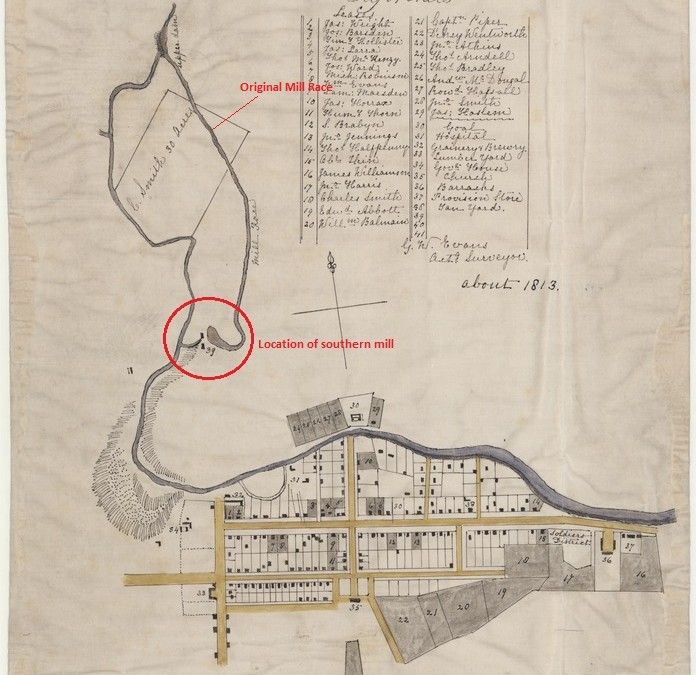 A problem faced by the early settlers in Sydney and Parramatta was a lack of wind or water powered mills with which to grind cereal crops. One of the earliest actions taken to address this problem was the engagement of Thomas Allen, previously employed at King’s Mill, Rotherhithe on the Thames. In 1792 he was engaged at a salary of £52 per annum,  to work as master-miller for the colony.

He arrived in Sydney on the Royal Admiral in 1792 and commenced duty on 6 October at Parramatta supervising a mill being built there.[1]  The following year a millwright, James Thorpe, arrived as a free settler on the Bellona and was appointed master-millwright at Parramatta at a salary of £105 pa. However progress appears to have been slow, and this wasn’t helped by Thorpe who apparently didn’t measure up to his work and was dismissed by Francis Grose.

By 1800 the lack of a fully functioning mill persisted and Governor Hunter listed machinery suitable for either a wind or a water mill brought from England in his ‘Return of Public Buildings’ of 25 September 1800. But it was Governor King who saw the project to its completion as it appears Hunter had been over-optimistic in his assessment of progress. Instead King, who had successfully constructed both a wind and a water powered mill on Norfolk Island, was more cautious and commented that he would continue with it but it would take ten months to complete the dams.[2]

Hunter had chosen to harness water power, locating the site in the centre of the Parramatta farming district, on the upper reaches of the river where a stone barrier across the river formed a natural dam and allowed a causeway to be constructed to supply water to power the mill-wheel. Despite continued attempts, the mechanism was reported faulty and the mill mostly stood idle.

This posed a very real problem for King as demand for an operational mill was becoming urgent as more grain was harvested and the population expanded. King hoped this problem might be solved by a master carpenter on Norfolk Island, Nathaniel Lucas, who wished to relinquish his situation there‘ and return to the mainland, King reported to Lord Hobart that his abilities in constructing mills would soon rectify the situation.[3]

The Sydney Gazette of 6 November 1803 commented on the gangs of convicts  employed in cutting the race for the water-mill and by 15 January 1804 it announced that: the Water-Mill at Parramatta will shortly be completed and the stone works were in great forwardness. The design of constructing a spacious granary over it will essentially add to the utility’. The article went on to extol the idea of incorporating in the mill a building to store grain which would also better preserve grain from weevil infestation.[4]

As a show of his determination to get the mill functional King also had Alexander Dollis, the master boat-builder on Norfolk transferred to Parramatta to assist Lucas. The two men found the existing mill so badly constructed that they had to dismantle and re-build it. George Caley, who was living on an adjacent piece of land to the described it to Banks as …

a large three storied stone structure, with an overshot wheel eighteen feet in diameter and eighteen inches in breadth’.

Caley could not report on the mechanism as he had not seen it, but according to other reports he believed that the construction was bad and the mechanism (probably ‘taken from some ancient and simple plan’) was too slow.[5]

Given Caley’s comments it was no surprise that the mill was not a success but the choice of site was also to blame as the flow of water at this part of the river was at times so low it couldn’t turn the wheel. Even the laborious construction of a water-channel from what was to become known as ‘Darling Mills Creek’ to the site of the mill failed to solve these water supply problems. By the end of 1804 King seems to have become less enthusiastic and writing to England admitted defeat, claiming that the mill would not ‘recompense the labour expended on it’.’[6] Less than a year later it was clear lack of water was not the only problem with the site. Heavy rains on 15 and 16 January, 1805 had  caused the river to flood and this in turn destroyed part of the mill-dam.

The mill was operated for a time by George Howell but it was finally destroyed in 1820.[7] No further attempts were made to utilise the power of the river until Samuel Marsden successfully built and operated a watermill upstream from the Government Mill site at the junction of the Darling Mills Creek and the Parramatta River[8]. Marsden, in his capacity as Superintendent of Works at Parramatta had been overseeing the work of Lucas and Dollis, and his new mill wisely avoided the original site chosen by Hunter. Howell later operated one of  Parramatta’s best known landmarks, Howell’s wind and water mill, which operated successfully from a site downstream, near the Queen’s Wharf, from 1828 to the early 1860s.

There is some conjecture as to the actual location of the Convict Mill. The 1904 map of Parramatta shows the mill race cutting west through the grounds of the Asylum and exiting just south of the first weir. However, recent research by Casey and Lowe indicates, according to the notes of Surveyor Edward Ebsworth, that the mill race followed a natural watercourse through the eastern side of the Girls Industrial Training School, exiting at the second weir further south placing the watermill between the Industrial School for Females and Cumberland Oval. [9] 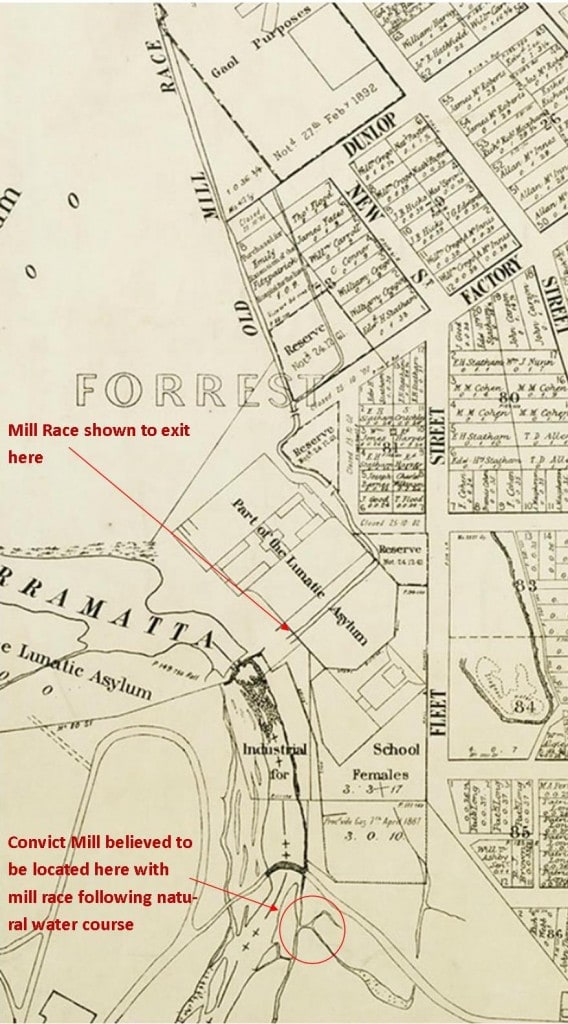 1904 map of Parramatta showing mill race in relation to Asylum and streets, and the site where the mill was believed to have been located