At 1 Fleet Street North Parramatta stands a group of buildings which provides a continuous story of the evolution of child welfare and juvenile justice in New South Wales.

Dating back to the 1840s, this is the site of the Roman Catholic Orphan School which later became the Parramatta Girls Industrial School, Parramatta Girls’ Training School, ‘Kamballa‘, and Norma Parker Detention Centre for Women. Despite the site being used for reforming, training and welfare of women and children it has a notorious and troublesome history. A number of Royal Commissions and investigations into the welfare, treatment and allegations of abuse of inmates has been conducted over the course of its history. It also has been the subject of a number of books, and plays based on the oral histories and testimonies of women who spent time there.

The first female orphan school was established in 1801 by Governor King in George Street, Sydney.[1] In June 1818 the girls in Sydney were moved to a new Female Orphan School established by Governor Macquarie at Arthur’s Hill, now known as Rydalmere, on the north bank of the Parramatta River and now the site of the University of Western Sydney Parramatta Campus. It later became the Protestant Orphan School. Another Roman Catholic orphanage was established in Waverly in 1837.

In 1841 construction began on a new orphan school at North Parramatta on the south side of the Female Factory to replace the Male Orphan School at Liverpool. Consisting of a four-storey building, and three-storey servants’ wing designed by Henry Ginn, using stone from a nearby quarry in Fleet Street.

An unexplained change in plans instead saw 113 children transferred from the Waverley orphanage to the new Roman Catholic Orphan School in North Parramatta. A new wing was built around 1850 to accommodate growing numbers of orphans and to also take in male orphans following the closure of the Male Orphan School in Liverpool. This new wing now currently links the chapel with the southern courtyard block.

Further work was undertaken by Architect William Munro from late 1859 including the addition of a wing to the 1850 building and, in 1860, a two roomed cottage for the gardener located against the northern boundary wall that separated the Female Factory. In 1862 Munro called for tenders to construct a hospital on the grounds of the Roman Catholic Orphanage. The hospital was renamed ‘Bethel House’ in the late 1920s.

View of the orphanage from the stone quarry in Fleet Street c.1865. Note the infirmary wing in the left background, the gate keeper’s cottage in the left foreground, the boys quarters in the centre and the main building on the bottom right .Parramatta Heritage Centre LSP00190 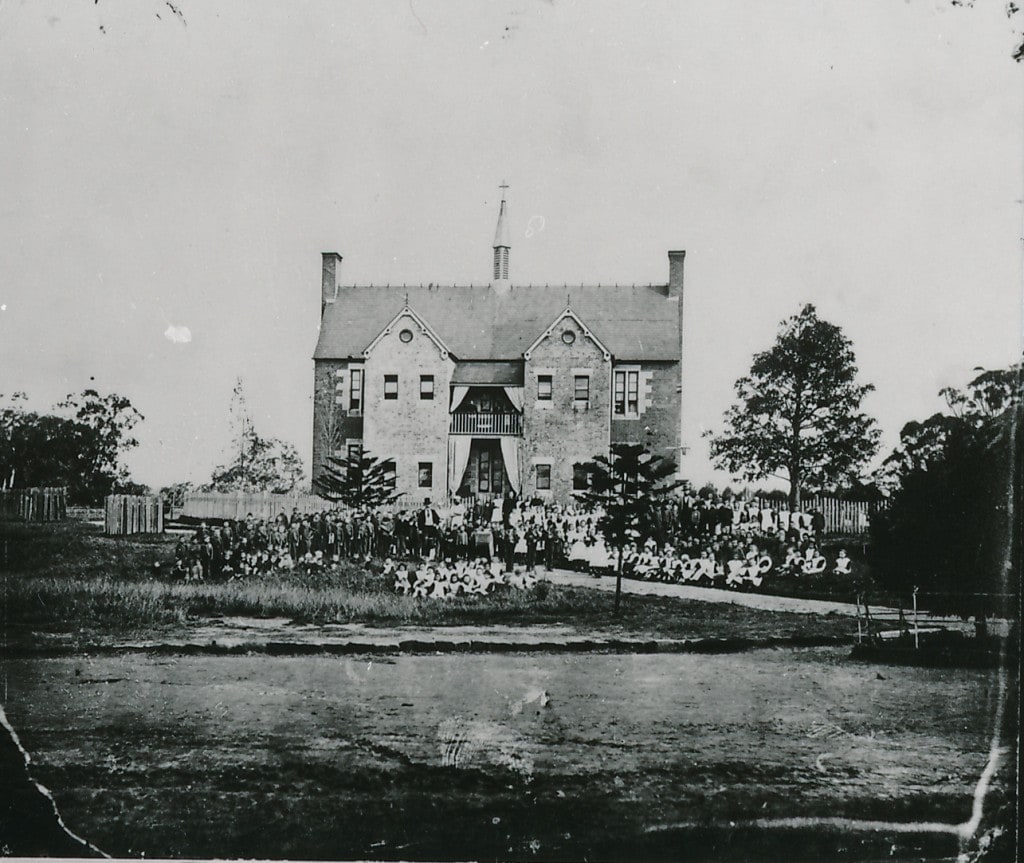 Children and staff assembled in front of the hospital. 1877. ACC002/34/23. Parramatta Heritage Centre

Following an incident involving one of the girls in the Orphan School the Colonial Architect ordered a fence be constructed between the orphan school and the Lunatic Asylum.

In 1881 the government passed the State ‘Children Relief Act’ responsible for boarding out children to homes and added a new wing south of the main building. When the Orphan School was closed in August 1886 there were 41 children living there.

A 1910 ‘Official Handbook of the Parramatta Industrial School‘ stated that the,

The Parramatta Industrial School is designed to deal with neglected and uncontrollable girls between the ages of 13 and 16 years, more particularly that type of girl whose companionships or home associations have resulted in her developing immoral tendencies or criminal instincts. Experience has shown that, as an institution, it is especially valuable to parents whose daughters have, much to their sorrow, got beyond control, and conceived an infatuation for the society of immoral or dangerous companions. [3]

Under the provisions of the 1905, ‘Neglected Children and Juvenile Offenders Act’, ‘Bethel House’ the former hospital became ‘The Girl’s Training Home’ in 1918. Girls classed as “immoral” were sent to the Industrial School and those as “uncontrollable” to the Training Home. This arrangement continued until 1923 when the Child Welfare Act came into force and the Training School was merged back with the Industrial School.

In 1934 a new Hospital Block, a narrow single-storied structure, located parallel to the western boundary behind the Bethel hospital, was constructed. It included two dormitories with sleep-out verandahs, an administrative and treatment centre, kitchen, dining and ablutions wing.

Ministerial reforms in 1956 saw the Department of Child Welfare separated from the Minister of Public Instruction and combined with Social Welfare under its own minister. ‘Bethel House’ was refurbished as a privileges cottage and renamed ‘Bethel Cottage’ in 1967. The laundry was turned into a modern commercial style laundry to assist in preparing girls for employment in the industry. A new classroom block boasting facilities for  home economics, arts and crafts and sewing, hairdressing and typing was completed in 1970.

In 1974 the Department began planning to divide the school into a junior remand centre for boys and a unit for girls with emotional and behavioral problems. The boys’ section was known as Taldree and accommodated boys in the 1930’s hospital block and Bethel Cottage. The remainder of the girls Training School made up of the courtyard buildings, main building and laundry became known as Kamballa.