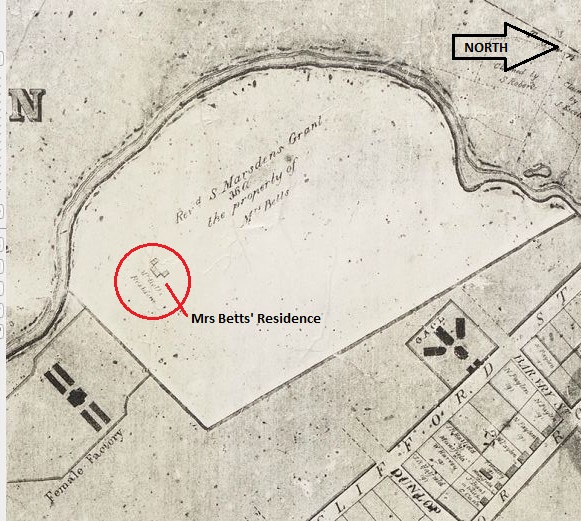 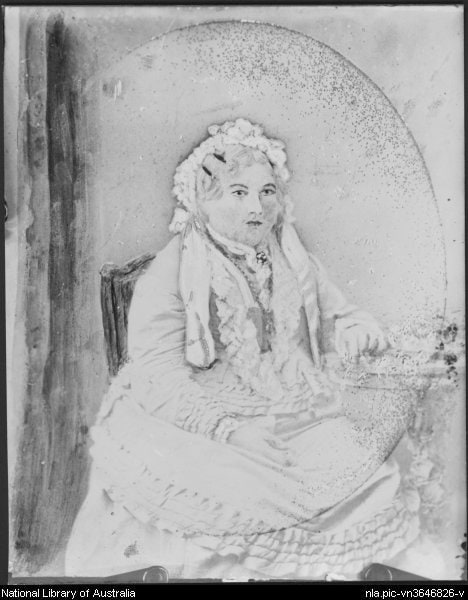 A few months later on 23 September 1830, Mary married John Betts at St. Johns’ Church in Parramatta. John Betts (1804-1852) was a tutor originally from Potton, Bedfordshire, England who arrived in Sydney, Australia on 1 September 1829 aboard the ship Eamont[iv]. Upon settling in Parramatta he opened a school and was later joined by his younger brother Josiah Allen Betts (1814-1863). [v]  His brother arrived on 20 March 1834 per Planter[vi] and five years later, on 19 February 1839, Josiah married Mary’s youngest sister Martha (1811-1895).[vii]

After the birth of Mary and John’s first child, Sarah Elizabeth, on 27 August 1831, Mary received a land grant of 1280 acres in Molong, New South Wales as a marital incentive from the Government[ii] to encourage young married couples and free settling women in the colony to set up home in the outback.

While in Molong, he built a house at Vale Head called “The Roundhouse”.[viii] After this the Bettses travelled between Molong and Parramatta, and when at the ‘Vineyard Farm’ they resided in the cottage known as ‘Mrs Betts’ House’. Tragedy struck the young family on 31 January 1837, when their two month old son, Alfred Musgrave died at the Vineyard Farm[ix].

Samuel Marsden died on 12 May 1838 and the Vineyard Farm was inherited by Mary and her husband. Unfortunately this was soon followed by the 1840s ‘Depression’ which brought financial hardships for the Betts. In an attempt to resolve this they decided in 1841, to subdivide the land, instructing the estate agent James Brynes to sell their ‘valuable property well known as the Vineyard or Old Mills Dam Farm’ in allotments. Below is the proposed subdivision plan by Surveyor C. E. Langley[x] 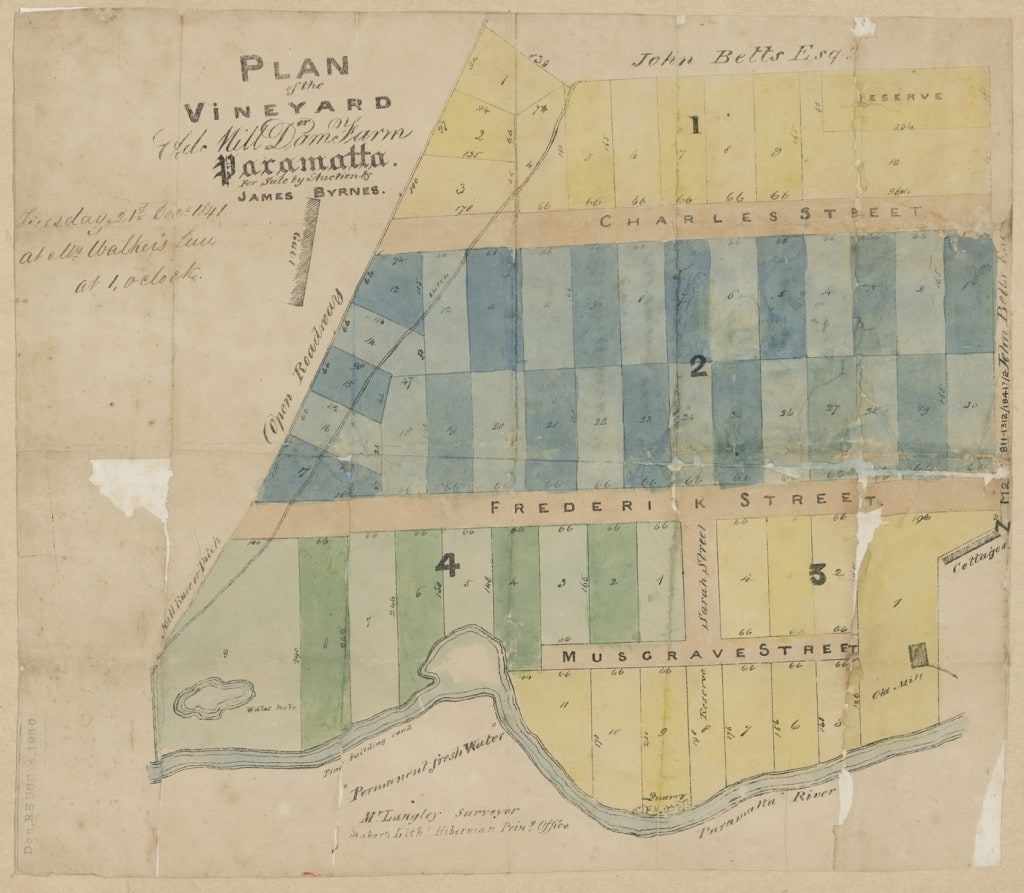 According to one of the many sale notices that ran from late 1841 through to June 1842, this property was described as containing:

…upwards of FIVE THOUSAND VINES, reared from the choicest cuttings, and in excellent bearing; another very important feature which this property possesses is the abundance supply of FRESH WATER. The entire western side being bounded by the pure and never-failing Waters of the Parramatta River, when the present Dam is raised (for it generally understood the Government intend doing it immediately) it will throw up the Water several feet above its present level, which will render the Water deep enough for any of those manufacturing purposes which cause water frontages to be so very VALUABLE, even at present almost the entire of the northern part of the Town is supplied with FRESH WATER from that part of the River on the Property, it being the only Unoccupied First-rate Frontage in the neighbourhood. The Land is partially wooded, and in many places a little beneath the surface, there is abundance of excellent brick earth, so that the manufacture of bricks can be carried on to a great advantage  …There is also a Splendid Quarry of Freestone on the Property, a right of which will be reserved for public purposes… The whole of this Property being advertised, has been divided into Allotments … one of these containing about half an Acre, comprises the site of an Old Flour Mill, the Stone Foundation and Timbers of which are in a state of high preservations, and with a few repairs could be converted into an excellent Residence, while the land adjoining it has been in cultivation more than once, it being a WATER FRONTAGE, it might be converted into a capital NURSERY, and many other profitable purposes.[xi]

Blaxland renamed the property as ‘Redbank Mill Farm’ and enlarged and improved the former Betts’ house, which he also renamed ‘Redbank’ house. By 1865, there were two more tenants on the farm, Reverend William Gore and George Langley, Clerk of the Court of Petty Sessions[xiv]. On 1 January 1853, Gregory Blaxland who was staying at ‘Redbank’ house committed suicide.[xiii].

In 1866, the Blaxland land was acquired by the government as part of plans to expand the neighbouring Parramatta Lunatic Asylum. The former Betts/Blaxland house was by then a substantial two storey residence and was designated as the Medical Superintendents’ residence. This continued until 1910 when a new superintendent’s residence ‘Glengarriff’ (designed by Government architect Walter Liberty Vernon (1846-1914)[xv] was erected on the south side of the river in the Wistaria Gardens.

In 1871, the renamed ‘Parramatta Hospital for the Insane’ received plants from the Royal Botanic Gardens, Sydney, for planting around the old estate. These included rare Brazilian Peppercorn trees (Schinus terebinthefolius), which in the 1998 survey of the grounds was listed as one of the few remaining survivors from this period.[xvi] Later extensions to the house including fern gardens installed 1880-1895 have long since disappeared.. 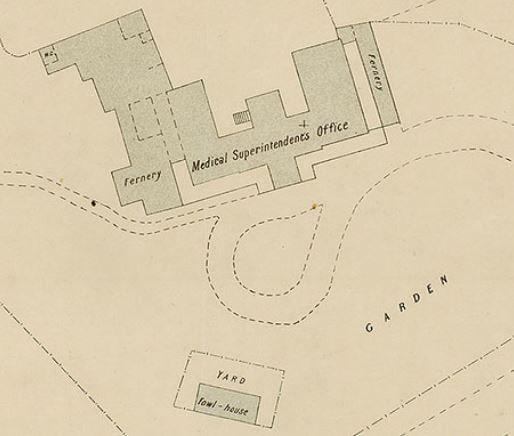 More free standing buildings were constructed around the old farm site in 1909-1910. Including a Federation brick building designed by Walter Vernon for use as the Staff Dining Room and Kitchen (the current Building 70 – the Phoenix Café) and the simple timber and fibrous cement cottage used as the accommodation for waitresses (current Building 69 – Wattle Cottage).

In 1948 the former Medical Superintendent’s Office and outbuildings were demolished to make way for ‘Male Ward No. 9’. This large H-shaped brick building, faced River Road and was built close to the original location of Betts/Blaxland house. It was later renamed  ‘Gungurra’ and used as Centre for Population Health.  A simple brick cleaners’ store named ‘Palm House’ was constructed around 1955. The orange grove next to this building has been removed and direct access to the river from the house is now blocked by another new building ‘Bunya’, built in 1997. [xvi] 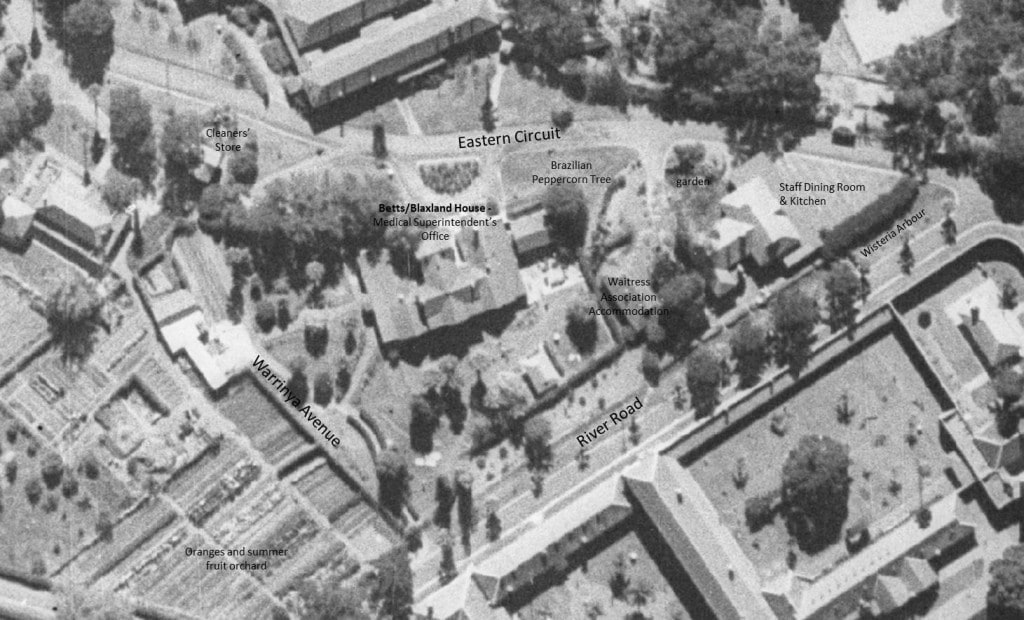 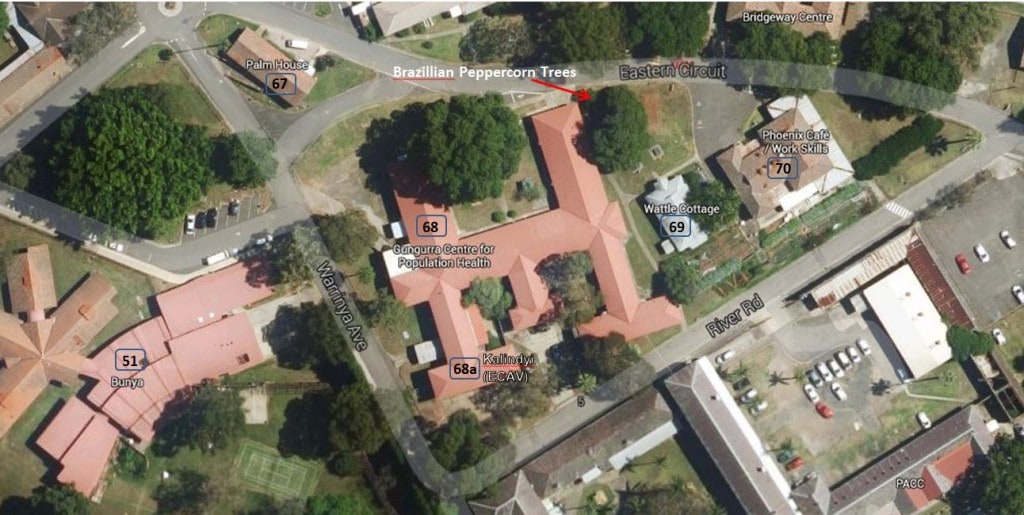 [viii] Note: The Vale Head Roundhouse was later destroyed by a fire and demolished in 1970.