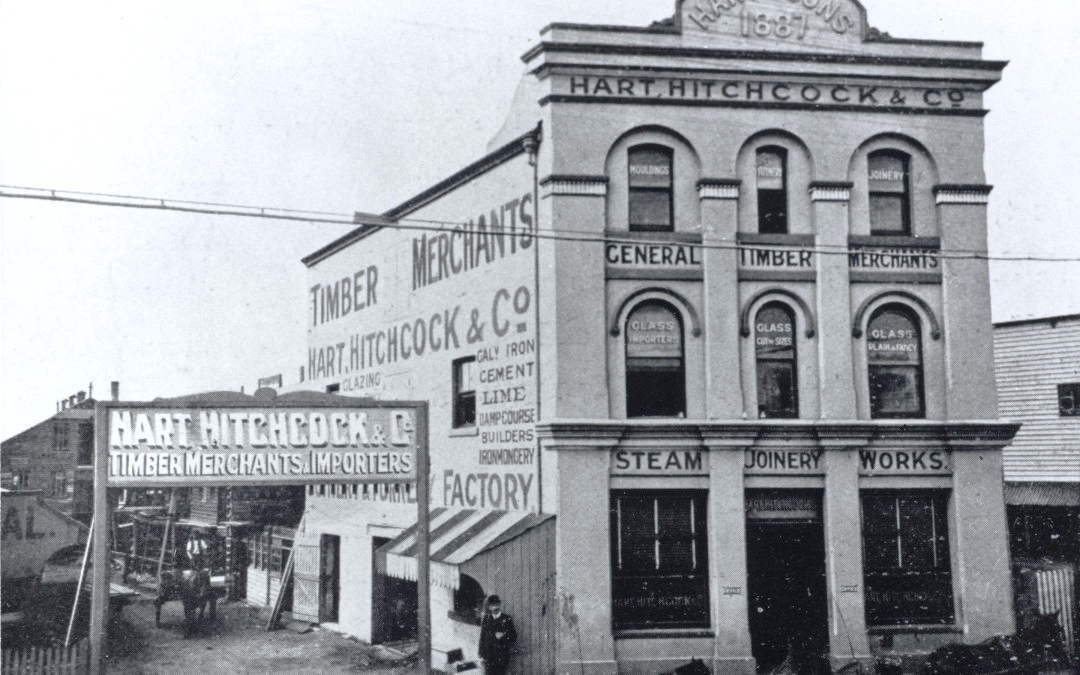 One of the most well known timber merchants in the Parramatta area during its time was the firm of Hart, Hitchcock and Co. The company originally began as Hart and Sons in 1887. [1] The founder of the company, William Hart, arrived in Australia aged 24 and settled in Parramatta where he became a well respected builder. He formed a successful business partnership with Jabez Lavor and has been credited with constructing a number of well know buildings such as the Leigh Memorial Methodist Church, Parramatta. Hart had four sons and two daughters. The sons were Dr. Hart once attached to the Parramatta Medical Institute, Joseph, and George and William who worked in the “Hart and Sons” firm.

In 1894, during the height of the depression, the firm of Hart and Sons ceased trading but was quickly reborn as Hart, Hitchcock and Co. William Hart, the son, had joined with William Williams Hitchcock who came to Parramatta to join Hart in forming the new company. The company’s main competitor at this time was the firm of Harper Timber located almost alongside the Hart and Hitchcock building in Darcy Street, Parramatta. As well as carrying selection of timber Hart and Hitchcock also traded in glass, sashes, oils, white lead.  A 1902 newspaper article describes the operations of the firm;

The business of Messrs. Hart, Hitchcock, and Company, whose large timber yards and steam saw and joinery works are situated right opposite the Parramatta Railway Station, in Darcy-street, was established about fifteen years ago. Since that time it has been steadily increasing. At the present time the firm supply all the surrounding districts which lie along the many roads branching out of the old town, with building material, their trade in galvanised iron being very considerable. Further than this, the proximity of the yards and mills to the railway line enables Messrs. Hart, Hitchcock and Company to carry on an important trade with the inland towns, as they can supply country clients with great promptitude, and at a saving in train freights, as compared with the carriage from Sydney. All their oregon pine, kauri pine, redwood, baltic, etc., they import direct, and it ls landed directly from the ships’ slings on to their punts and towed to the firm’s wharf at Parramatta., They claim to be able to land material on their wharf at a less cost for carriage, and handling than it can be done at any wharf in Sydney Harbor. Thus they have a distinct advantage in competing for the trade of the district. On their wharf at present is stacked, assorted according to their different sizes, nearly a million feet of rough and dressed timber. The saw mill and joinery shops in Darcy street are fitted up with the best and newest up-to-date steam plant for the manufacture of all kinds of joinery, turned work, mouldings, etc., and in this department a large staff is constantly employed.The manufacture of framing for weatherboard houses is made a specialty, and this the firm prepares, to any design, properly marked and ready for erection. [2]

Photograph montage showing the Hart, Hitchcock and Co., building, River Road, on the left and the Darcy Street buildings on the right dated, 1928.  Photograph held by Parramatta Heritage Centre LSP00298.

In 1910, William Hart the founder of Hart and Sons, died aged 80 years old. In 1911 Hitchcock sold his share of the business to his son William Hitchcock and George Folkard.[3] George Folkard had joined Hart and Sons as an office boy and worked his way up through the company to became General Manager and eventually part owner.[4] Folkard was also a Parramatta Council Alderman between 1924 and 1928. Fours years later, in August 1915, William Hitchcock Senior died. [5]

In 1927 the firm moved its administration to new premises constructed right next do their existing building in Darcy Street. [6] Unfortunately soon after they were informed that part of the land the buildings were constructed on were targeted to be resumed from the firm for the widening of Darcy Street.

In 1930, after occupying the site at Darcy Street opposite the station for at least 43 years they moved their offices to Rosehill at the corner of Hassall and Alfred Streets with the main timber works at River Road. [7] By 1934 the company changed its name to Parramatta Properties Property Ltd. and went into liquidation. A new company Folkard, Hitchcock Ltd. was formed which appears to have operated until at least 1940.

William Hart, partner of the firm, died in 5 May 1937 aged 82. It is worth noting that he was the father of William Ewart Hart the famous local aviator.