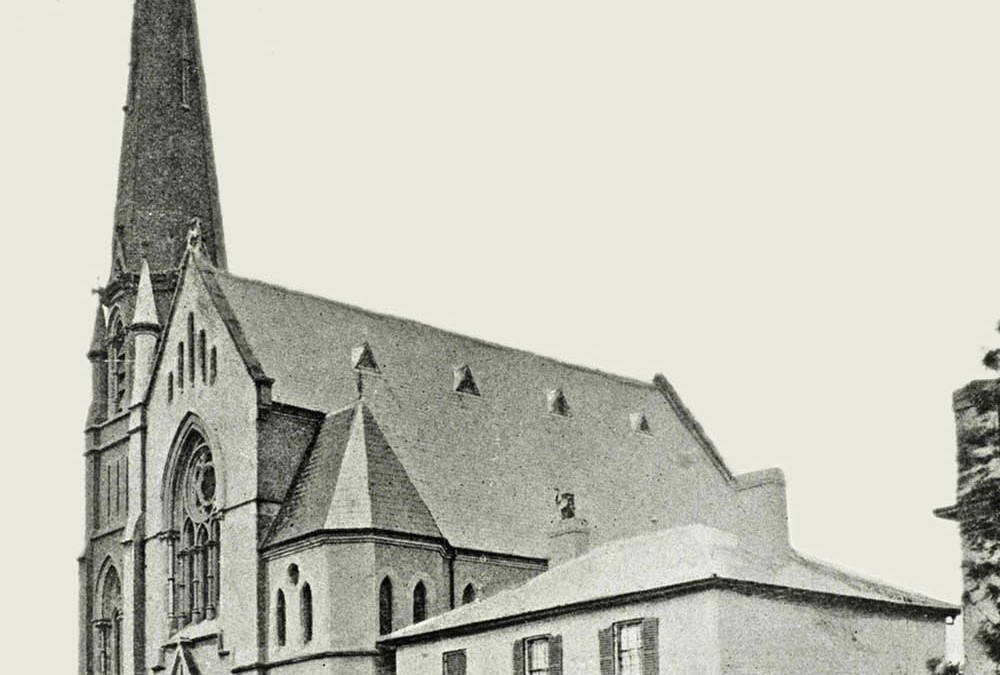 The Leigh Memorial Church, like other buildings in Parramatta is built on the land of the Barramattagul people of the Darug nation.  When it opened its doors on the 21 June 1885 it was a relative latecomer to a town whose church spires were closely dotted across the skyline. Perhaps more significantly for this story it was also at this time the tallest spire in Parramatta, at 43 metres, and was the latest in a number of Wesleyan churches which ran in a row westwards along Macquarie Street.

The first of these was Lawry Chapel (1821) followed by the Parramatta Wesleyan Church, or ‘Macquarie Hall’ as it was better known (1839) and later Jubilee Hall (1871) which was used for Sunday school. Between these and the Memorial Church was the parsonage which was initially built next to the chapel in 1821 and which underwent a series modifications over the following forty years. In 1841 it was renamed Mission House and in 1860 Leigh House.

However work on the Leigh Memorial Church really began around 1880 when the expansion of the congregation forced the church to consider bigger premises. Initially they planned to use the parsonage garden and some accompanying Crown Land (granted to them on 10 May 1880) but after backing out of a contract with Mr. Mansfield (the architect of the Parramatta Town Hall) they settled on putting it out to community competition. Advertising started in June 1883 and the winner was the ‘Hart and Lavors’, both of whom had strong local Weslyean connections.

Work commenced in 1884 with the foundation stone being laid on 6 February in the presence of around two to three hundred people. In all four foundation stones were laid: the first by Mrs Ellen Schofield widow of Rev. Schofield who had conducted a mission in Tonga and served at Parramatta 1832-1833 and 1845-1847; the second was laid by Mrs. Elizabeth (Betsy) Hunt an active member of the Parramatta church; a third was laid by Sir Wigram Allen who had supported the Methodist movement in Australia for many years; lastly a stone was laid by The Hon. James Byrnes, a past mayor of the township and perhaps the church’s most senior member. Byrnes, who passed away in 1886, is remembered through the large rose window on the gallery level of the church.

An article in Australian Town and Country Journal dated, 10 January, 1885, described the later stages of the project;

The spires or towers of several other churches and chapels are to be seen scattered about, the latest addition to which is a Wesleyan Church, beautifully proportioned in the florid Gothic style, by the side of which a scaffold, ” fearfully and wonderfully made,” has been run up for the purpose of building a spire, which, it is to be hoped, will be appropriate to the rest of the building, and not be of the candle-extinguisher order of architecture.

The final building was acknowledged as a good example of Neo-Gothic architecture and still stands on Macquarie Street, behind the new Parramatta Square development. There were however some critics who felt the structure was not up to ‘scratch’. Around 1888, Dr Carruthers, who was a minister for the Ryde circuit, felt the building had;

…tied a millstone around the neck of Parramatta Methodism that well nigh drowned it. And, even with huge debt, they did not provide a church that was suitable or satisfactory. High walls, high roof, high galleries, high pulpit and high steps – with a corresponding high debt – these things were there. But there was no comfort either for the people in the high pitched, ill-proportioned building. [2]

But the major problem highlighted by Dr Carruthers was that the predicted cost of 6000 pounds sterling had ‘blown out’ and the church was burdened with this debt for many years afterwards [the many fairs run out of Macquarie Hall were mainly held to help pay of this debt].
Around 1908 the building’s gallery was lowered by four feet opening up the windows to full view, a false ceiling was put in and the rostrum lowered to suit the congregation of the bottom floor and the galleries. All expenses for this were borne by Ebenezer Vickery. [3] The next major alteration to the building was one often described by insurance assessors as an ‘act of God”. In 1919 a bolt of lightning struck the church spire and making it a risk for passers-by and church-goers alike and this eventually forced its removal. 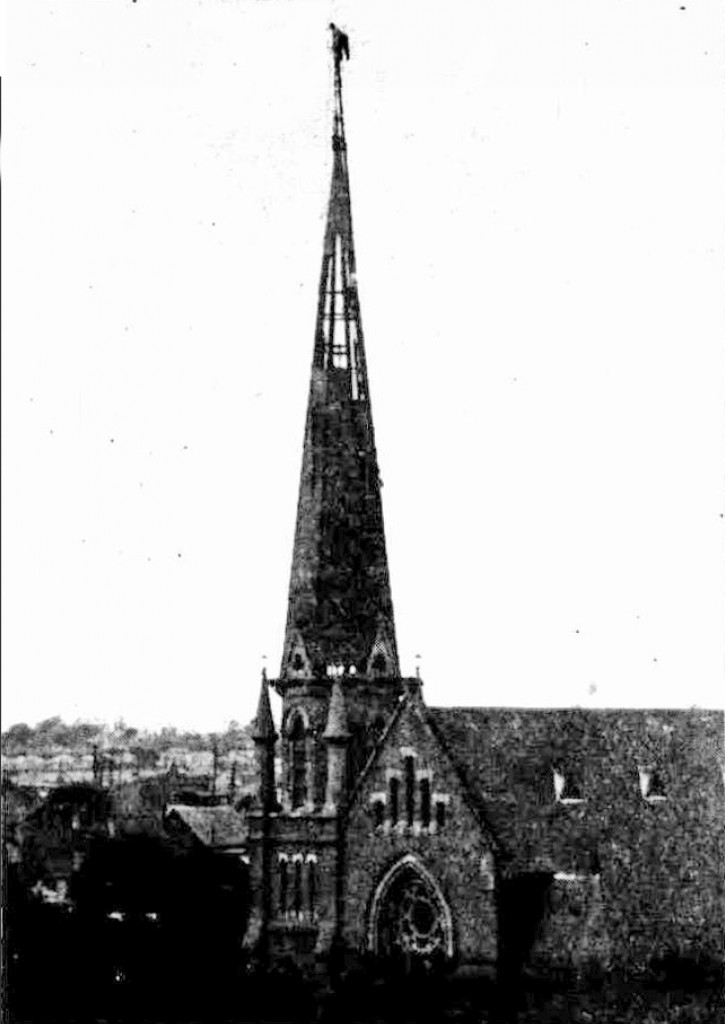 The incident occurred on 25 January, 1919, when a bolt of lightning appears to have forced the spire onto an awkward angle. Fearing the worst the Parramatta Council appraised the situation and informed the Church they thought it would cost around 200 pounds to make it safe again. In May they employed the Norwegian ‘steeplejack’ Louis Vinge to remove the Muntz metal off the outside of the steeple and take down the heavy finial which extended some 12 feet above the rest of the spire.

To get to the top of the steeple the skilled professional climber had to cut a way out of the metal ‘skln’ of the steeple at about 16 foot from the top and then ‘shin’ up the rest of the way to the top carrying a line with him. The heads of nails and bolts protruding from the outside sheathing of the steeple (a good deal disjointed by the vibration of years of wind-storms) made his passage a perilous and difficult one. The difficulties he seemed to think more of than the perils. ‘Don’t you got afraid up there?’ he was asked. ‘I’m afraid of nothing,’ he replied.
Once up on the top he could not get down without the aid of the line. ‘That he made fast, and then he lowered himself into the interior of the steeple again at the 16 ft. below point of entrance. He could not have come down the way he had got up, so everything depended, so far as his safety was concerned, upon the soundness of what his line was made fast to and just then no one knew exactly what was the nature of the damage up there at the top. Still, the matter of safety — though ever all important — seems to the outsider to be the last thing in the steeplejack’s mind as ho talks about his work.

Vinge’s interview, and portrait of himself at the top of the spire, appeared in the the Cumberland Argus on the 10 May 1919. The photograph above was taken by George Weeks.[4] Eventually the spire was removed completely and this accounts for the slightly odd look of the Leigh memorial Church which is still missing its beautiful spire.