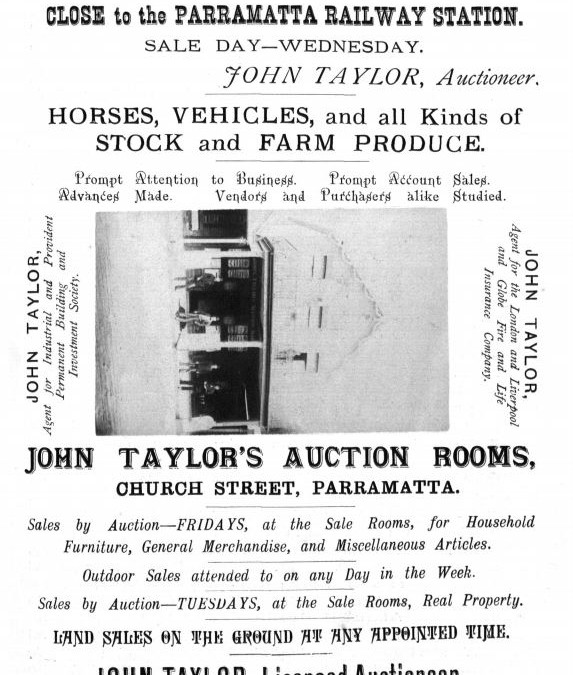 John Taylor was born on 8 December 1827 in Parramatta. He was son of Hugh and Elizabeth Taylor. Hugh Taylor wanted his son John Taylor to become a lawyer but in early 1840s John had taken up an apprenticeship with James Urquhart, Parramatta’s coachbuilder. After six years working with James, John went to New Zealand and then Maori war. In 1849 he went to California and arrived back to Australia just in time for gold rush.

John’s coach making skills proved very profitable in Californian gold mines. In early 1850s after the death of his parents John returned to Parramatta with his American wife and Afro-American servant. His servant Frank was very good in boxing and athletics, which made him sporting hero among the Parramatta crowd in late nineteenth century.

There were no local banks for major financial transactions. Local solicitors and publicans were providing this service to local residents. In 1847 solicitor William Lewthewaite of George Street was offering to lend 300 pounds at 10 per cent interest. In 1859 John Taylor offered the same service to lend the amounts of pounds 100 or more.

John Taylor was a licenced auctioneer in Parramatta. He had auction rooms in Church Street, Parramatta. John had an efficient staff of clerks with the special knowledge of sales, cash handling with ultra-promptness. He laid out is week as:

Special sales were held as and when required for houses, land, fruit orchards any day of the week.