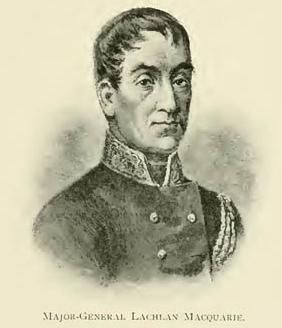 1761 Lachlan Macquarie is born on the Isle of Ulva, Inner Hebrides, Scotland. Of six boys, only four survived – Hector, Donald, Lachlan and Charles – and one girl, Elizabeth.

1778 Elizabeth Campbell is born, one of four surviving children. Her father is John Campbell of Airds.

1781 Macquarie transfers to the 71st Highland Regiment, serves in New York, Charleston and Jamaica. He returns to Scotland, where there is a famine.

1787/1788 Macquarie recruited 17 men for the regiment which enabled him to be given a company to serve in India.

1789 Macquarie is promoted to Captain Lieutenant. The 77th Regiment embarks on the Hercules for Tellicherry, India.

1793 Marries on 8 September, makes a home in Bombay, aged 32. The Regiment is sent to Calicut. The Macquaries purchased two slave boys in Cochin, Hector and George, later freed, remains with Lachlan Macquarie, a faithful servant for all his life.

1796 Jane becomes ill and dies of consumption on July 15th. Macquarie is inconsolable.

1805 Lachlan Macquarie proposes to Elizabeth Campbell and she accepts. A long engagement follows.

1806 The last review of the 77th Regiment, who were returning home. The tenth anniversary of Jane’s death. Macquarie visits her tomb.

1807 On 30th March, he embarks on the ship Prince of Wales to return to England. He took seven months to reach London. He marries Elizabeth Campbell in the ancient church of St. Peter & Paul, Holsworthy, Devonshire on 3 November. She was 24, he was 46. They moved to Perth, Scotland where the regiment was garrisoned.

1809 The Rum Rebellion in NSW ends and Gov. William Bligh escapes to Hobart. Lachlan and Elizabeth, embark on the ship Dromedary in May with George Jarvis, Joseph Big, a coachman and Mrs Ovens. Their ship enters the Heads on 30 December 1809.

1810 Macquarie takes his responsibilities as Governor. In January, William Bligh returns to Sydney, then departs again in May. Celebrates St Patrick’s Day with convicts, holds a May Day Fair at Parramatta, and opens a Race Course in Hyde Park. Signs an agreement with Alexander Riley, Garnham Blaxcell and D’Arcy Wentworth for a ‘Rum Hospital’. Plentiful harvest, cattle and sheep are increasing. Macquarie announces that the lower classes are inadequately supplied with livestock. A cow on 30 acres can be purchased and paid for in grain inside 18 months, and must be kept for three years. Sheep from government flocks are available on similar terms. St Phillip’s church is completed. The turnpike road to Parramatta is completed. A foundation stone is laid for a church at Richmond. Improvements begun on Government House and dairy, Parramatta. Names Liverpool and the Macquarie Towns – Windsor (earlier called Green Hills), Richmond, Castlereagh, Pitt Town and Wilberforce.

1813 A Public Fair is held in Parramatta – the first by public authority. Macquarie travels the colony and visits the Nepean River, Emu Island, Hawkesbury River, Wilberforce, Eastern Creek, Rooty Hill. In Liverpool he opens a new store and granary. Macquarie sees off the expedition by Blaxland, Lawson and Wentworth to find a way over the Blue Mountains. There is great progress in the roads and buildings of the colony. The harvest produces plenty of of [sic] grain, subsistence for double the population. By August it is in short supply. With very little rain, severe depletion of livestock. St John’s, Parramatta beings renovations and steeples. The Female Orphan School at Parramatta is begun.

1814 After several miscarriages, Elizabeth gives birth to Lachlan Macquarie Junior on 28th March. Famine. In October many bushfires. George Evans is sent to explore the land over the mountains, and discovers the Bathurst Plains. Muster shows that in the first ten years of the colony 5958 convicts had arrived. By 1810 – 11, 500 convicts. From 1812 to 1817 – 3978 males and 681 females. In 30 years – 15, 794 convicts transported to NSW. Francis Greenway arrives in NSW, a convict and a civil architect.

1815 Macquarie and his party, including Elizabeth, found Bathurst. A Supreme Court is convened in NSW.

Compiled from: Meet The Macquaries At Parramatta