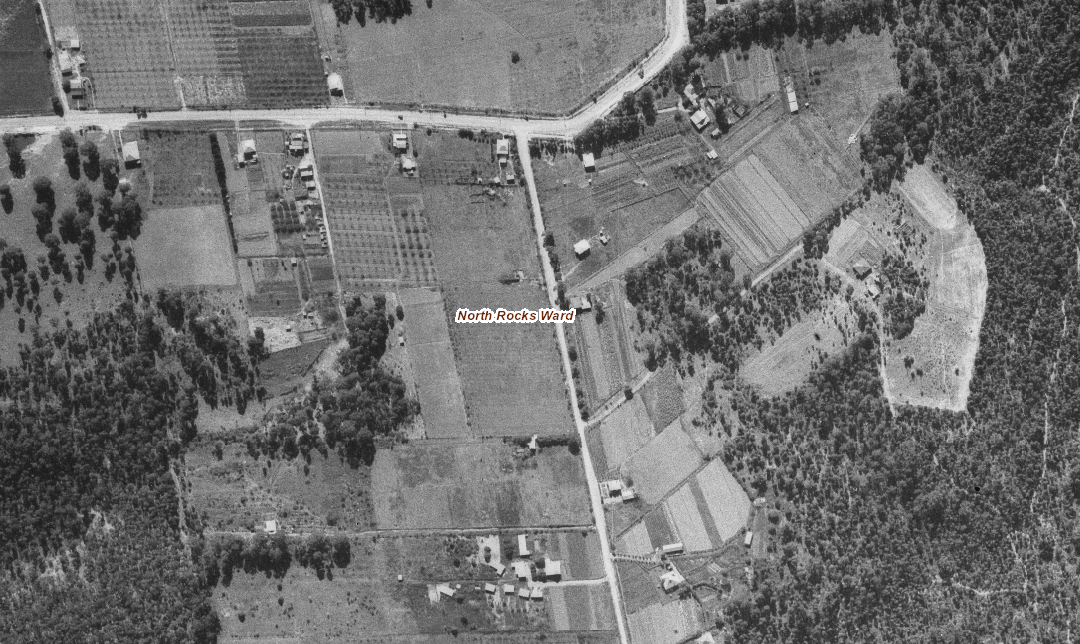 As a result of the 2016 New South Wales amalgamation of council areas, North Rocks is now a part of the City of Parramatta Council. It was previously part of the Hills Shire Council.

North Rocks derives its name from the large sandstone formations that previously dominated its landscape. The area was originally known as Jerusalem or Jerusalem Rocks, as the historical city of Jerusalem is situated on rocky slopes. In the early 1800’s, North Rocks was considered one of the  most loved spots to visit for walks and picnics, due to its beautiful landscape.

In a retrospective article written in 1938 for The Cumberland Argus and Fruitgrowers  Advocate, the journalist describes how North Rocks was historically perceived:

North Rocks 134 years ago, as now, was one of the district’s beauty spots. A reporter who accompanied a “select party” on an outing to the place, then called Jerusalem, thus described its beauties in a Sydney paper: “Jerusalem lies about six or seven miles from Parramatta towards the Northern Rocks. Several hours were occupied in contemplating the natural beauties of the variegated scene, surrounded by the statelyforestwhich protects it from the scorching summer sun. In the centre of its valley, encompassed by stupendous rocks, a murmuring stream, delectable to the taste…Meditation here might find a blest retreat…” [1]

On the corner of Bettington Road and  Pennant Hills Road there is a large rock, which is a North Rocks rock.

It came from a nearby creek. Unless you go for a bushwalk to see the rocks, this is the last one that you will see in an urban environment. They pulled it out of Hunts Creek to put at the entrance of a new housing estate called Kingsdene, which was written up in 1962. [2] [3]

The North Rocks landscape consisted early in its history not only of large sandstone formations and lush forests, but also of rugged bushlands and caves. These provided the perfect environment for the bushrangers of the time to hide. The most famous local bushrangers were John Donohoe – also known as “Bold Jack Donohue” and the Wild Colonial Boy – alongside John McNamara and William Underwood. These men struck fear into the local population and gained notoriety in the years between 1826-1830. The caves in the area also became a place where many illicit stills were built, making alcoholic cider from the locally grown fruit. The rewards for informing on a distiller were generous. ‘Rewards to free men of stock or cash or a full pardon to convicts helped to eventually eliminate most illicit stills’. [4]

Other examples of North Rocks rock buildings are: Cumberland Hospital, Oatlands House, Spears Road Rockleigh Nursing Home building, the Rockcliff House at 224 North Rocks Road, and the stone weir at the former Bunnings Warehouse on the corner of North Rocks Road and Windsor Road. The small semicircular sandstone wall at Lake Parramatta has since had its higher levels of the wall topped up with other rocks at some stage. North Rocks rocks are a pinky/red hued stone as a result of the minerals in the area. [5]

A major commercial development occurred in North Rocks in 1826 when John Raine opened a steam powered flour mill. This was the first mill in Parramatta not requiring wind or water for power. The mill was capable of producing 2,500 bushels of wheat a week.  John Raine’s mill became the Darling Mills, which took its name from Ralph Darling, the Governor of New South Wales at the time. It was built on the site where a Bunnings Warehouse now is, on the corner of Windsor Road and North Rocks Road. Raine Avenue in North Rocks was named after John Raine. Darling Mills however was forced to close by 1829, and with that closure North Rocks continued largely as a rural area. North Rocks Road was originally called the Governors Arms Road because it passed through a large 300 acre farm of that name originally granted to Thomas Horton James on June 18, 1840. [7] Governors Arms Road was initially built to enable access to the Darlings Mills where the local residents took their grain to have it milled into flour. Governors Arms Road officially became North Rocks Road in 1910.

For the remainder of the 1800s, North Rocks was primarily a significant fruit growing area. Orchards dominated the area, with a strong emphasis on oranges, peaches and nectarines. By the early 1900s however, the soil had become substantially depleted, and North Rocks continued its transition from rural to semi-rural with many of these orchards being largely subdivided.  However ‘the use of fertilisers and new areas of cleared bushland allowed for a diversification of agriculture on smaller farms such as poultry farms, cut flower farms, dairies, piggeries, nurseries and some revived orchards’ [8] As recently as the 1950s, there were many peach and nectarine orchards in North Rocks, as well as a substantial amount of poultry farms and piggeries.

The 1950s saw the development of North Rocks from being a predominately semi-rural area to residential and industrial. This was perhaps the most significant transition in the suburb’s history. The 1960s saw a number of significant residential subdivisions, including the creation of the well-known “Lynwood Estate” on North Rocks Road in 1965. The New North Rocks Road was created around this period to help create more access to these new subdivisions. These subdivisions were largely possible as a result of the removal of the Green Belt in 1964. The Green Belt was an area around Sydney on which building was restricted.

An avenue of historical significance in North Rocks is Statham Avenue, which was named after Edwyn Henry Statham. Statham in 1859 bought 300 acres from a merchant named Thomas James, including the western half of Hunts Creek Reserve. He named the property “Lambert Grange”, and established an orchard. He built a house near what is now the junction of Statham Avenue and North Rocks Road. Statham also worked as a storekeeper at the Parramatta Lunatic Asylum. After he died in 1887, his family subdivided “Lambert Grange”, selling off small acreages, as the Statham Estate. Statham Estate was divided between his three sons, Edwyn Joseph, Henry Worthing and Francis March.

Edwyn Joseph Statham who had been the assistant Engineer of Roads, went on to serve on the first Baulkham Hills Shire Council in 1906. [9] At the time of his death in August 1921, The Sydney Morning Herald reported that Edwyn Joseph Statham was “one of the pioneer officers of the Public Works Department in this State, and probably laid out and constructed more roads in New South Wales than any other man in the Public Service” [10] 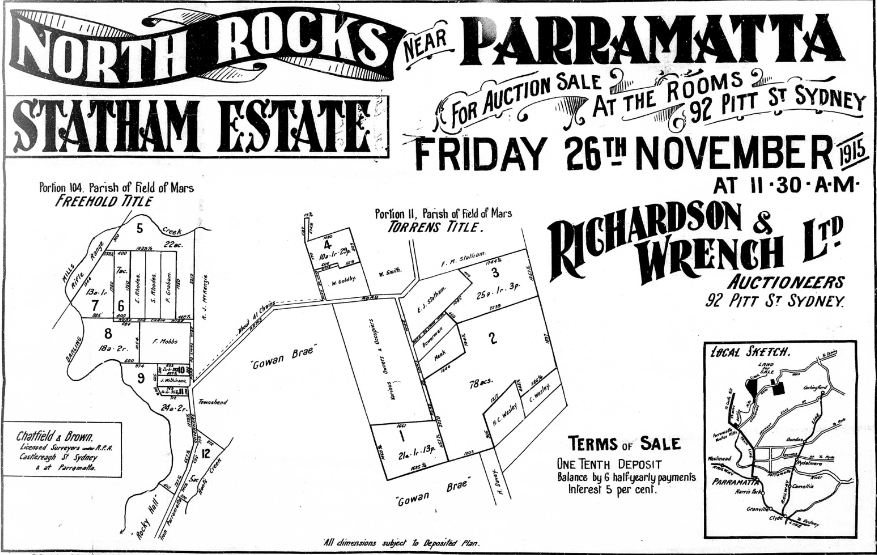