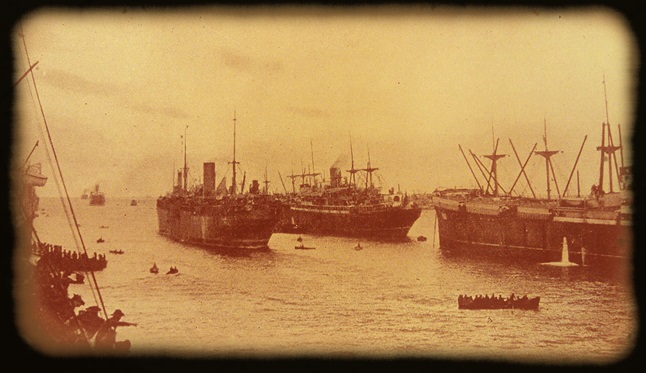 [The following insight into the psychological trauma war inflicts upon its soldiers and the way the Military appears to have failed some of these appeared in the Cumberland Argus and Fruit-growers Advocate, 10 February 1917. It was written by Signaler Harold C. Sweet, who was the son of Mr. A. Sweet, Parramatta Station Master, and was written ‘At Sea’ 12 November 1916 while travelling from Australia to the war-zone in Europe]

… There was a little excitement shortly before 5 o’clock yesterday morning when the alarm ‘man overboard’ was passed along to tho bridge.

Lifebuoys were promptly thrown over by the men on guard and the ship was brought to a standstill and two boats lowered. The lifebuoys have a cistern attached to a cord and before being thrown over a plug is pulled out, and as soon as it hits the water the cistern flares up and the flame shows plainly across the water.

The boats were out some time and gathered in the buoys, but no man was found until shortly afterwards, when he was seen swimming near the bow of the ship. The boats were then re-called and he was taken on board after being in the water unsupported for 40 minutes. He must be ‘some swimmer’ as he appeared none the worse for his adventure.

It appears that this poor fellow (a returned soldier) is suffering from shell shock and goes off his head occasionally. He should never have been allowed to leave Australia a second time. He was talking to another man just before the incident occurred andtold him he was going overboard. So, the other man, thinking he was joking, said ‘Good-bye.’ He straight away placed his hands on the rail and vaulted into tho sea, but must have come to his senses as soon as he struck the water. He says he swam to one of the buoys, but found it too heavy to bring back to the ship, so left it and swam back unsupported.

He is now in hospital and being watched. The first death on board occurred this morning. A young fellow, only 19 years of age, contracted pneumonia a few weeks ago and had been very ill ever since. He was buried with full military honors this afternoon.