Park Gate Hotel was once located on the south-east corner of George and O’Connell Street, Parramatta, New South Wales, opposite the George Street Tudor Gatehouse to Parramatta Park. The photo above is from our Local Studies Library Photograph Collection. It  was originally published in the book The Jubilee History of Parramatta : in commemoration of the first half-century of Municipal Government, 1861-1911 on page 195. 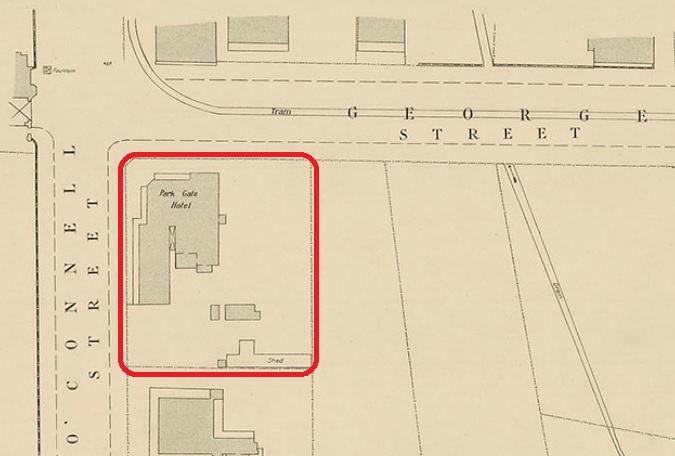 The original land grant owner was William Charles Wentworth[1] with 1 acres 26.5 perches which he later leased out to James Smith.

The earliest mention of Park Gate Hotel in Parramatta appears in 1879 when Annie Cripps nee Willis purchased it for £7,000. Her husband was John Fisher Cripps, a confectioner who once managed The Coffee Palace[2] Hotel in lower Pitt Street and George Street, Sydney before it was burnt down. Their son, John Fisher Cripps, Junior was the proprietor and manager.[3]

Back in Old Parramatta, there was a tram stop right along George Street until 31 March 1943[4]. This convenience was highlighted in early advertisements published in Parramatta River : steamers & tramways guide[5], in addition to promoting ‘J.F. Cripps, Jun.’s Park Gate Hotel’ as a place for ‘families, wedding and other parties’. Cripps also applied for and was granted a billiard license.

On 20 February 1893, the hotel license was transferred to Rowland Nicolle[6]. This was followed by a succession of publican license transfers including:

In 1923, it was put on the market for lease by Raine & Horne and described as

“This well-known and old-established Hotel is solidly constructed of brick, part of the building is of 3 floors, and part 2 floors. It has spacious verandahs. Contains about 20 rooms and offices. The property is let on lease, at a rental of £5 per week. Further particulars on application to the auctioneers.”[9]

In 1927, Harry Herbert Gadd controversially transferred the publican licence from the Park Gate Hotel in Parramatta to Belmore.[10]

During the 1930s, the Gleeson family leased the property for nine years and it was renamed the ‘Park Gate Guest House’. Advertisements from the time promote is as a ‘first class accommodation’ with ‘motor garages’ and a telephone number UW8990.[11]

The Park Gate Guest House continued to operate until 1959 when it was mentioned in the Sydney Morning Herald[12] that the site was to be demolished on short notice. At the time it had 30 rooms and from a 1953 L.J. Hooker order of sale notice was described as being a

“block of five Self-contained Flats, a Shop and Flat. Guest Houses and Garage.”[13]

At present, the site is occupied by The Garfield Barwich Commonwealth Law Courts Building. The address has changed to 1-3 George Street, Parramatta. This building is a Ken Woolley (architect) building, which was completed in 1987 and is part of the Parramatta Justice Precinct and named after Sir Garfield Barwich. If you are interested, it is also featured in the book Ken Woolley: Selected and Current Works by Ken Woolley, Archer, Morlock and Woolley on pages 124-127.[14]