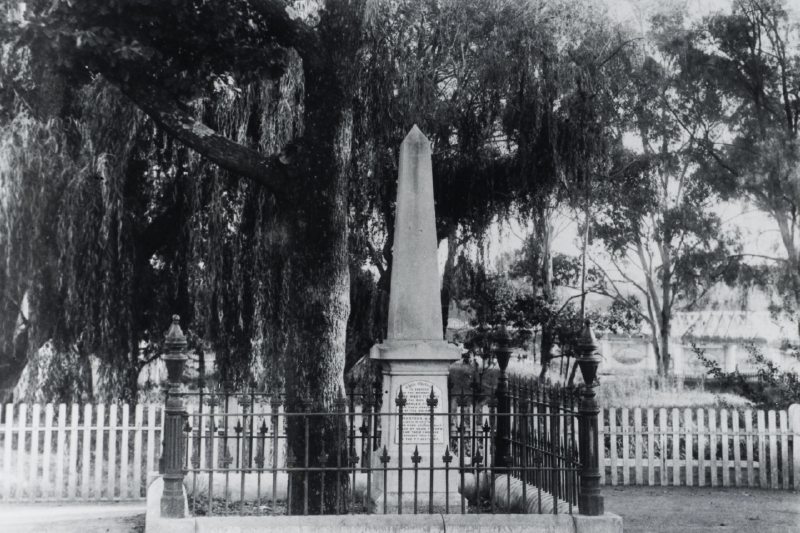 This monument was unveiled on Centenary Day (Australia Day) 26 January 1888 in remembrance of the accidental death on 7 December 1847 of Lady Mary Fitzroy aged 57 years, wife of the then governor of NSW Sir Charles Augustus Fitzroy. Lady Fitzroy, born 1790, was the eldest child of Charles Lennox, 4th Duke of Richmond.

In August 1846 Fitzroy replaced Sir George Gipps as Governor of NSW. The Fitzroy family moved into Government House at Parramatta in April 1847 following extensive renovations to the building by James Houison. The house and grounds known as the Government Domain had remained vacant for several years and had fallen into disrepair.

Prior to the occupancy by the Fitzroy’s, the Domain had been a place of recreation and enjoyment for the citizens of Parramatta. The closure of the Domain provoked an indignant response which was published in the Parramatta Messenger at the time. Governor Fitzroy determined that as he was occupying the house and grounds at his own expense, then it was within his rights to exclude public access.

Despite taking umbrage, most citizens were proud that the vice-regal status afforded by the residency of the governor of the colony had returned to the town and were genuinely affected by the tragedy which had taken place in their midst. Over the short period of her residency at Parramatta, Lady FitzRoy, described as having ‘dignified and unaffected manners and an amiable disposition’ had endeared herself to the people of the colony and was very widely mourned.

The much anticipated happy occasion of attending a wedding in Sydney soon turned to tragedy. The Governor and Lady Fitzroy accompanied by aide-de-camp Lieutenant Charles Masters had set out from Government House and were travelling down the long tree-lined driveway towards the Macquarie Street entrance to the Domain.

The four horses pulling the carriage were reportedly already skittish before leaving the stables and rather than being well trained carriage horses, were spirited and easily startled young blood stock. Shortly after leaving the house the pace of the horses surged and when nearing the Macquarie Street gateway, the horses bolted they galloped out into the street coming to a halt some distance away near the corner of Church and George Street. The carriage was overturned and the occupants were thrown violently to the ground. Lady Fitzroy and Lieutenant Masters died shortly after as a result of their injuries, however Governor Fitzroy suffered only minor wounds.

An official inquest was held at 5 o’clock the same afternoon and the testimony of eye witnesses was heard including local wine and spirit merchant Mr Joseph Walford who stated that the Governor had tried to keep the horses on the carriage road but they were galloping at full speed and were out of his control.

The verdict was read by the coroner ‘ Lady Mary Fitzroy came to her death in consequence of being accidentally thrown from her carriage’. Her funeral was attended by hundreds of mourners and Lady Mary was laid to rest in a sandstone vault surrounded by a wrought iron palisade fence within St John’s Cemetery, Parramatta. Also interred in the same location was Lieutenant Charles Masters. Following her death, a lengthy poem was written to her memory by Mr John Rae, the Under-Secretary for Works.

Death in the midst of life!

While scarce had ceased the sounds of mirth,

And all with health was rife,

Before a son’s and husband’s eyes,

A lifeless wife and mother lies!

Later assessments of the tragedy indicated that the accident could have resulted from the interplay of two contributing factors. The particular team of horses chosen for the journey that day were unsuitable for the task, coupled with the ineptitude of Fitzroy in handling such a lively team of horses.

A marble memorial tablet was placed on the wall of St James’ Church, Sydney, however, it was forty-one years before a monument was erected at the accident site in Parramatta Park. Mrs Wainwright of Parramatta who was present at the time of the accident was still able to identify the oak tree where the accident took place forty years after the event.

An article in the Sydney Morning Herald of November 1886 remarked that the site of the death of Lady Mary Fitzroy was ‘but faintly marked by a cross on the old oak tree against which her carriage was said to be dashed’. The article suggested ‘Would it not be well to affix a plate?’

The movement to commemorate Lady Fitzroy’s tragic death in a more permanent fashion was taken up by the Member of the NSW Legislative Assembly for Parramatta and Alderman for the Borough of Parramatta Mr Hugh Taylor, who was instrumental in the erection of a suitable memorial at the scene of the accident. The Colonial Treasury also contributed £60 towards the cost of the monument.

Taylor was also successful in overcoming opposition from other aldermen to the erection of the Centennial Memorial Drinking Fountain in Centenary Square. The celebrations in 1888 which cost £500 also included a street procession, children’s picnic in the park, sports carnival, citizens’ banquet in the Town Hall, fireworks display and dinners for the inmates of the various institutions in the town (the Industrial School, the District Hospital, the Macquarie Street Asylum, the George Street Asylum and Newington Asylum).