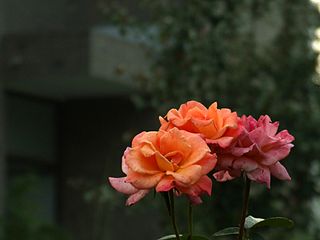 The Rosa chinesis was introduced from China to the Western world between 1760 and 1790 resulting in horticulturalists and nurseries hybridising the plant. Many different species were created, including the China rose, tea roses, Noisette rose and other varieties. Rosa chinensis, a wild variety was found by an Irish doctor working for the Chinese Maritime Customs in Yichang in 1884. 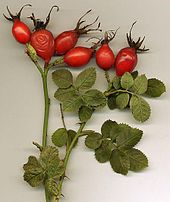 Rosa chinensis known commonly as the China rose or Chinese rose. It is from the Rosaceae family. Rosa chinensis is a deciduous Shrub growing to 6 m. It is considered the Queen of the Tropics. Rose seed takes about two years to germinate. China rose can be cultivated in most soils. It is believed that garlic planted nearby can help protect the plant from disease. China rose flowers are richly scented. The flowers have both male and female organs. China rose is used in traditional medicines and is very good for stomach problems. China rose is an edible flower – flower petals, fruit, leaves, seeds and stem are all edible. It has a layer of hairs around the seeds beneath the flesh of the fruit/flower. These hairs can cause irritation to the mouth and digestive tract if ingested. The young shoot tips, flower buds and flowers can be added to soups. Rose hips can be used in jams, jelly, marmalade, rose hip syrup and are brewed for tea. Rose is used to make rose oil and rose water. Fruit can be eaten raw or cooked. The fruit is about 20mm in diameter. Young peeled shoots can be eaten raw. The seed is a good source of vitamin E, it can be ground and mixed with flour or added to other foods as a supplement. 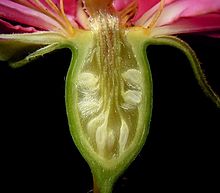 Seeds from this beautiful flower in various colours were distributed throughout England and passed through to different countries. The flowers of this plant are unusual as throughout their life, they darken with age. These plants were used heavily in traditional Chinese medicine; the roots and fruits for treating arthritis, boils and rheumatoid joint pains, fruit used on sprains and wounds and flower buds to alleviate pain.

The presence of the China rose in Parramatta can be attributed to the Macarthur family. In 1809, John Macarthur was exiled to England for his part in attempting to overthrow Governor Bligh in what is now known as the Rum Rebellion. Eight years later on his return to Parramatta on board the ‘Lord Eldon’, Macarthur and his sons brought a China rose to his homestead where his wife, Elizabeth managed the estate during his long absences. Elizabeth was a keen gardener and planted many China roses and often exchanged plants with other colonial families. Her son, William was a horticulturalist and planted many China roses near the vineyards as he believed them to have antifungal properties and would protect vinyards from fungal attack. He also established a nursery on the property and was able to obtain plants from all over the world.

The arrival of the British in Australia coincided with the arrival of the roses in Europe however there was no recorded evidence of any roses on board any of the ships. According to the notes of Charles Fraser who was superintendent of the Sydney Botanic Gardens, Lady Brisbane introduced varieties of the Scots and China roses along with a number of decorative plants in 1827 – 1828.

China roses were also planted around the ‘Red Cow Inn’, adding a very personal and intimate touch. In 1889 ‘The Illustrated Sydney News’ quoted one visitor’s impressions of the residence and gardens:

“As to the ‘ Woolpack’s ‘ companion Inn, the ‘ Red Cow,’ the following notice occurs of it in its best days: ‘After passing a particularly pretty garden, in which stood a long, low house with a spacious piazza in front, I was surprised by my husband’s driving up to the door, and still more so on finding that this was our inn where we had engaged rooms. My belief, that it was a private residence was natural enough, for the sign of the “Red Cow” on the roof had escaped my notice; but we were most comfortably accommodated in every way.

The garden was full of beautiful flowers particularly the bright scarlet blossoms of the pomegranate, the soft and fragrant oleander, the quantities of pink and crimson China roses. An enormous prickly-pear (I think it “must be twenty feet high) grew near the house, and was full of yellow blossoms and dark red fruit, in picking up some of which to taste, I stuck my gloves so full of the fine, penetrating prickles that it was some days before I extracted them all from my hands. Two beautiful birds were living tame in the garden, they were called curlew, but I doubt if correctly; and several of the native parrots were caged in the verandah.”