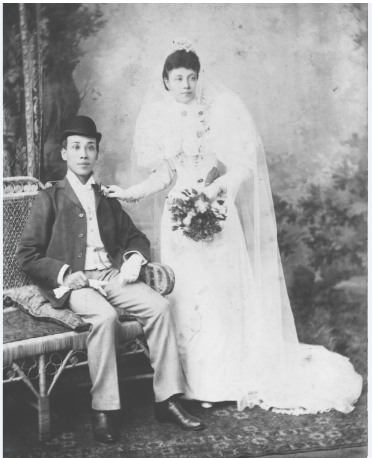 Henry Ah Hing Fine Chong was a successful merchant and portraitist who lived and worked in Parramatta and Sydney during the late 1800’s and 1900’s.

Cheng Fan-Cheong was born in Oom-Shak which is now Shekki/Sheqqi and was the son of a wealthy family. Ah Hing arrived on the steam ship the Normanby in April 1877 and received his Certificate of Naturalization on the 2nd June 1883. 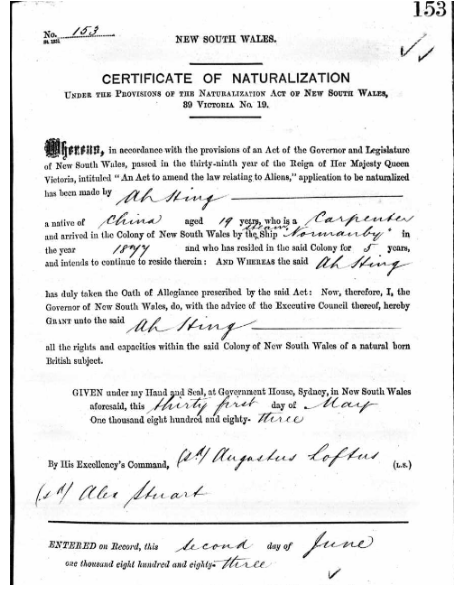 His time in Parramatta was spent as portrait painter and he had a business on Church Street. He used the name Fine Chong as a trading name and he had previously worked in George St Sydney at the photographic studio of Lamartiniere & Kerry. But it is work as a merchant that brought him wealth.  He was a part of King, Hing and Co. The King, Hing and Co business was once a partnership involving nine individuals but this dissolved in 1904. Mr Fine-Chong was still part of this business in 1908.

His wedding to Lilly May, the eldest daughter of Guoc Ah Poo, in 1896,  was a society affair and showed the wealth of the parties involved. The ceremony was held in St Johns at Parramatta with many on lookers from the town to see the interesting ‘Celestrial’ Event. The bride “was dressed in a lovely China white silk gown the skirt made with a train.the large sleeves with white satin…and was ornamented with a spray of orange blossom…her hair with pearls and a bouquet of fern and white camellia” Lily was gifted with a gold watch and chain from her new husband. The wedding was also reported in the Australian Town and Country Journal. The couple were married by The Venerable Archdeacon Gunther.

Mr Fine-Chong was a member of the Chinese Empire Reform Association and the NSW Chinese Chamber of Commerce and took part in a protest in 1908 with many other Chinese merchants to boycott Japanese products.

The couple had a daughter in September 1900 named Doreen Thelma. Towards the end of this life Ah Hing Henry Fine-Chong  was registered at 2 Thomas St North Parramatta but lived at 206 St John’s Rd in Forest Lodge for many years. This was a home and a shop and the corner it was on became known as Fine Corner.

Henry Fine/Ah Hing passed away at Balmain Hospital on the 24th July 1944. He is buried at Rookwood Cemetery.