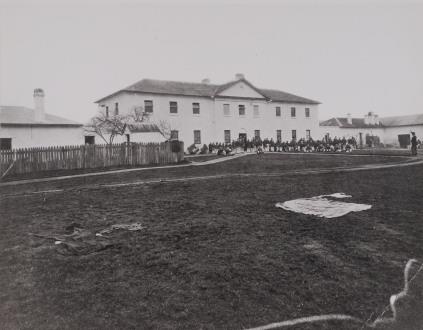 Here are congregated, surely, victims of all the ills to which flesh is heir – social, physical, mental, moral ills. Within a stone’s throw of each other you may find the octogenarian pauper and the young girl waif not yet entered upon her teens. Two criminals who escaped from gaol over there a week or two ago were recaptured in the lunatics’ yard near by. As you walk through the infirmary wards of one institution after another you see the same types repeated, from the child dying of consumption, surrounded by her pictures and playthings, to that old, old man I saw in the George-street Asylum who worked for Governor King in the last century, and who now hesitates in the last stages of senile decay. Here is a fine strong young fellow sequestered from the world by reasons of an hallucination…Here, again, is a well-fed and decidedly muscular-looking youth spending six months in a separate cell in the gaol for vagrancy. At the pauper asylum by the river I saw a lad, crippled for life by the ill-treatment of his father…[iii]

The predominance of asylums, hospitals and goals in the Parramatta region was not without controversy. A two part story on Parramatta as “A City of Asylums” featured in the Sydney Morning Herald in August, 1890, in which the question was asked – “Is it good for the town thus hemmed in by asylums, or for the population that grows up dominated by their sinister influence?”.[iv] Archdeacon Gunther of St. John’s, whilst noting that “pauperism in Sydney is a sad reality and that the proportions of paupers to our population is shamefully large and rapidly increasing”, questioned why “there should be such [a] concentration in Parramatta”, reiterating that “the town of Parramatta seems to be fast becoming a city of asylums”.[v] This sentiment was, perhaps more bluntly, obvious in the Cumberland Argus and Fruitgrowers Advocate where a poet called “A Ratepayer” was moved to action “because Parramatta is being made a rubbish-heap for prisoners, madmen and mendicants by the establishment of so many asylums in its midst”, penning the poem “A City of Asylums” which begins:

Of Asylums, there’s a City

On the Parramatta’s banks,

And each week they, more’s the pity,

Add unto their inmates’ ranks

And deserving poor as well,…[vi]

So dominant was this discourse that the Victorian newspaper the Euroa Advertiser introduced Parramatta to its readers as “a city of asylums”. In the description of Parramatta, the paper states its “population is over 11,600, and this includes 2629 paupers, lunatics, and prisoners, and 90 Chinese”. This linking of the Chinese population to those other outsider groups who were undesired is indicative of the broader racist sentiments that would lead to the development of the White Australia Policy.

As Jack Brooke notes in his work From Canton with Courage, members of Parramatta’s Chinese community spent time in the township’s various asylums, including the Macquarie Street Asylum.[vii] Brooke notes that the Chinese inmates must have felt the additional burden of being “culturally separated” from the majority of other inmates. They may also have more keenly felt the impact of a lack of English fluency.

Records held by the New South Wales State Archives and Records provide a glimpse of those men of the Chinese community that spent time in the Macquarie Street Asylum. Brooke identified the names of three Chinese men who died in the asylum. Ah Chow (Tommy), aged 54, died on the 10th October, 1897. Sue Tonge, aged 73, died on the 13th January, 1900. Ah Yee, aged 73, died 21 June, 1900.

The Macquarie Street asylum had a formidable reputation. A glimpse of this is evident in The Interior of a Government Asylum, written by an ex-patient and published in the Australian Magazine in 1881.[viii] The writer describes the fear associated with the Macquarie Street Asylum, writing that being sent to Parramatta, and “especially the Macquarie-street branch, was looked upon as the ultima thule of convalescent woe”[ix], the equivalent of being sent to the edges of the known world. Indeed, the writer recounts advice from a bed-neighbour prior to leaving for Parramatta:

“You will find it,” said he, very gloomily, “better to have died here, than live a month where you are going.”[x]

He goes on to describe the inmates of the facility, providing evidence of the peoples of different nations who were present in the institution.

I found the Asylum, situated in Macquarie-street, Parramatta, and to which I was transferred, peopled by some of the extraordinary concentrations of suffering and indigent humanity possible to conceive. They then numbered some three hundred and twenty souls. Men of every nation and calling; of creeds indescribable. The majority well nigh worn out already in the world’s service, many of them originally deportes from the old country, and all, more or less, apparently suffering from almost every description of ailment known to medical science, and, verily, if the highways and hedges of New South Wales had been searched for recruits, a more deplorable assemblage of bodily wretchedness could not have been gathered together into one refuge.[xi]

Acknowledgement of the diversity of inmates, of “men of every description” is evident in the description by the writer that “religious services [were] held weekly by the ministers of several denominations”.

Asylums, such as the Macquarie Street facility, were public institutions created to care for those without the means to support themselves. Chinese migrants, like other immigrants during the period, were often over-represented amongst the lower and working classes, without the means to support private care, and without the extended family networks that may otherwise have been called upon to offer support in times of financial stress, ill-health or old age. Additionally, as Elizabeth Malcolm suggests, Chinese immigrants seeking asylum may have also suffered problems and exclusion as a result of language barriers, dietary practices and racial stereotypes, particularly in interactions with medical and nursing staff.[xii] Malcolm notes that migration itself could be a “traumatic experience” and that this, coupled with poverty and prejudice, impacted significantly on why immigrants sought asylum in public institutions.