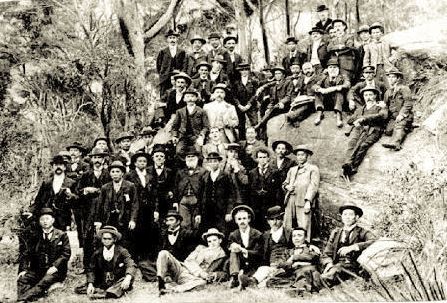 In celebration of Chinese New Year 1899 a picnic was organised by the Chinese Merchants’ Association in Sydney in early February. Together with members of the Chinese merchant communities and their families, several representatives of prominent European trading companies such as Burns Philp and Co were also in attendance. Following a cruise along the Parramatta River aboard the steamer ‘Brightside’, refreshments were served while moored in Middle Harbour to watch the racing events held by the Johnson’s Bay Sailing Club. This collaborative celebration of East and West was enjoyed by all the participants and exemplified the respect and esteem in which each was held by the other.

The Port Jackson Company’s steamer ‘Brightside’ left the Circular Quay at noon, and after making a trip some distance up the Parramatta River, some of the beauty spots around Middle Harbour were visited, a return afterwards being made to watch the sailing races of the Johnson’s Bay Sailing Club, refreshments were partaken of on board, and various toasts submitted, all of which were drunk with the customary enthusiasm, Mr. Sun Johnson, Mr. Yee Hing, and Mr. Lee being the principal speakers. The wharf was reached about 5.30 p.m., a thoroughly happy time being spent by all present at the gathering.