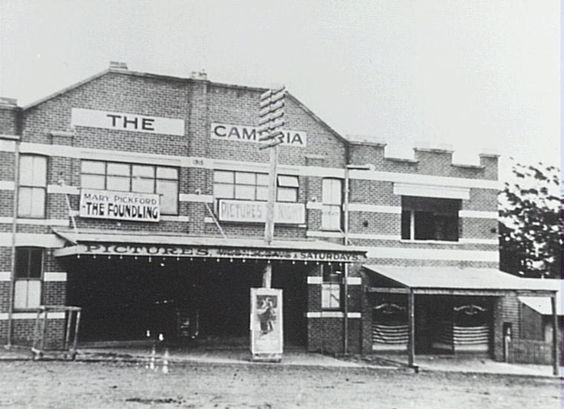 Travelling down the busy main thoroughfare of Epping today, it’s easy to overlook the building at 46 Beecroft Road. Nestled in a strip of small commercial and food outlets opposite Epping Railway Station, the building played a significant role in the development of the suburb. Indeed the property, originally known as Cambria Hall, is a hidden cornerstone of Epping history.

Constructed by David Nicholas, the former stationmaster of Epping Railway Station, Cambria Hall opened its doors on 6 November 1915. Nicholas purchased the land during his time working at the railway station and, displaying what Kass (1996) terms “astute entrepreneurial flair”, immediately realised the potential of building an entertainment hall and a handful of surrounding shops on the site.

Cambria Hall was initially used for concerts, social and fundraising events, political meetings and other community gatherings. The hall was also the venue, in February 1922, for a memorial service marking the unveiling of a monument nearby, which commemorates the men of Epping who gave their lives during World War 1. The Sydney Morning Herald reported at the time:

“Notwithstanding the unpleasant weather, the hall was completely filled, the congregation including relatives of the deceased soldiers and a number of returned men in uniform”.

At this time, Epping was just emerging as a suburb.

The Early History of Epping

The Wallumedegal group, whose lands stretch along the Parramatta and Lane Cove Rivers, were living in the region now known as Epping when the first Europeans explored the area, shortly after the arrival of the First Fleet in 1788.

The district was part of a land grant to two naval officers (an uncle and nephew by the name of Kent) in 1796 and 1804, respectively. According to Pollon, at this time:

“A very undesirable class of person had collected in Epping… gaol escapees, sly groggers, smugglers and others – and honest settlers avoided the area”.

The Kents cultivated the area as William Farm, which was subsequently purchased by James Devlin, in 1835. The names Kent and Devlin are commemorated across the locality in the names of streets and natural features.

The first residential subdivision of the area occurred in 1883 and, following the opening of Epping Railway Station, the area began to develop from bushland and orchards into an outer-Sydney commuter suburb. Originally known as East Carlingford, following much public debate, the name Epping was adopted in 1899. The name was derived from Epping in Essex, England, where one of the suburb’s prominent citizens, William Midson, had family connections.

By the early 20th Century, a number of ‘village suburbs’ in the wider area around Epping began competing to become the local shopping and socialising hub. Kass (1996) states David Nicholas’s Cambria Hall swung the outcome firmly in the favour of Epping. The entertainments provided at the hall drew large numbers of people to Epping High Street (now Beecroft Road) and in turn fostered keen interest in the development of further commercial services in the vicinity. In the years that followed, Epping thrived.

The Cambria and ‘moving pictures’

Shortly after opening Cambria Hall, David Nicholas realised the potential of using the site to introduce the local community to a new, exciting mass entertainment – ‘moving pictures’. The ‘movies’ shown at the hall were silent, accompanied by a pianist though, according to McAndrew (2001), the musical interpretation was often drowned out by noisy steam trains passing through the train station, opposite.

The hall, by now known locally as ‘The Cambria’, provided patrons with a lush interior that McAndrew (1999) describes as “decorated with exotic Italian scenes such as gondolas in the canals of Venice”. It is not difficult to imagine the delight such an entertainment experience must have provided for Epping locals of the time, emerging from the horror and hardships of the First World War.

In her memoirs, recorded in October 1985, long-term Epping resident Ethel Winifred McKerrell (1897-1998) recalled some of the fun family experiences she had enjoyed at The Cambria:

“Going to the flicks on a Saturday night was a popular event. Whole families would fill the theatre in Epping. Mum and Dad, my sister Esme and I would sit in the same row. The boys sat with their friends in the middle rows enjoying things that went on – lots of mucking up.”

The rise and fall of King’s Epping Theatre

By the early 1930s, silent movies began to be replaced by ‘talking pictures’. These films required large and complicated projection equipment so, in 1935, The Cambria became one the first two buildings in Sydney to be transformed into permanent cinemas by the renowned King’s circuit (the other being in Mosman). The building was renamed the King’s Epping Theatre, a local community venue where for decades local residents enjoyed the delights of the ‘big-screen’. By this time, Epping had developed into a large, respectable and affluent suburb.

Thelma Christie (b. 1926), who worked as an usherette at King’s Epping Theatre in the 1940s recalled when interviewed by McAndrew in 2001:

“Saturday sessions were extremely popular… reservations could be made by phone and lots of folk had permanent bookings. I recall two ladies had A11 and 12 upstairs on a permanent basis. These were the best seats in the house. In keeping with Epping standards, audiences were well-behaved and I never experienced any trouble”.

However, by the late 1950s, small suburban theatres across Sydney were struggling to compete with the television sets being welcomed into homes across the city and, on 18 June 1960, Epping Theatre closed its doors on the magical world of celluloid for the final time.

Following the closure of Epping Theatre, the premises became a Woolworths supermarket. Subsequently, the building has housed several small commercial concerns including a video store, a hairdresser and beauty salon, a music tuition centre, a fitness studio and a café. 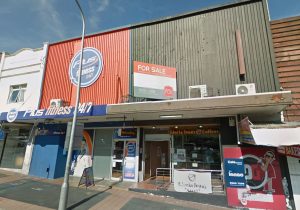 Since it opened more than a century ago, Cambria Hall has held a mirror to the development of Epping. The iconic building is still reflecting the restless momentum and expansion of the suburb – as at January 2017, the property at 46 Beecroft Road is for sale again.

Divided into multiple premises and covered with modern signage, the original purpose of the building is now almost completely obscured. However, we can still reflect on the lively past of this important Epping structure, and imagine the local community being drawn here, in the early decades of the Twentieth Century, to socialise, debate and commemorate. With a little more imagination, we can visualise the excited crowds thronging through the doors to view the new marvel of ‘moving pictures’ and, later, queuing up to enjoy a fun Saturday afternoon with family and friends, at ‘the flicks’.

Cambria Hall, such an important thread in the historic commercial and social fabric of Epping, is still with us – if we take the time to look.

McAndrew, A, Carlingford and Epping – Partners in History, Self-published, 1999